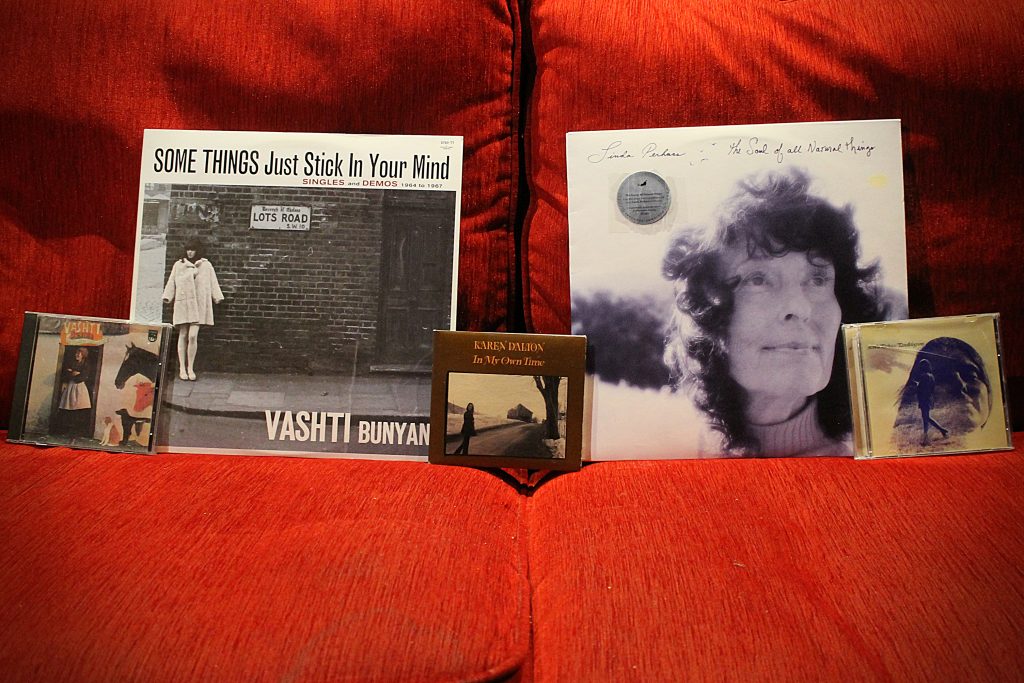 Music today has taken a trip to 1970 again, the absolute opposite to Betty Davis song-wise, sound-wise, image-wise, but they are both strong talented women who went missing. Vashti Bunyan made one Folk album, Just Another Diamond Day (1970). It sold so badly that she gave up music as a bad idea. I saw it on eBay today for £3,570.

It all started before that in 1965 after Stones’ manager Andrew Loog Oldham had her record, the Jagger/Richards composition Some Things Just Stick In Your Mind, nothing happened. She made another single for Columbia, Train Song, in 1966 but still, nothing happened. So she set off with a friend in a horse and carriage with hopes to join Donovan’s music commune, it never happened but she ran into producer Joe Boyd (Pink Floyd, Nick Drake, Incredible String Band) who offered her a deal when she was ready. Her travelling had given her the opportunity to write the songs that would appear on Just Another Diamond Day.

Folk luminaries were involved with the project, Simon Nicol and Dave Swarbrick from Fairport Convention, Robin Williamson from The Incredible String Band, folky John James and arranger Robert Kirkby (Nick Drake). Again nothing happened so she retired from the music and brought up her children. Somehow she was rediscovered and in 2005 she released her second album Lookaftering followed by Heartleap in 2014. She released a double compilation album of those early singles and demos called Some Things Just Stick In Your Mind in 2007. The newly recorded albums sound like time stood still. So the moral of the story is never say never and in the wake of the new Shirley Collins album Heart’s Ease (she is 85 years old) it might be time for you to revisit your classic English Folk gene.

If Vashti Bunyan is a little too far into mellow English Folk tradition then let us travel across the Atlantic and find Karen Dalton. I only have one CD by her, her second album In My Own Time (1971), like Betty Davis on Just Sunshine Records and like Vashti Bunyan and Betty, the pure personality of it transcends its style. It’s supposed to be American Folk influenced a la Greenwich village with a Blues tinge but her voice is so particular that you don’t quite know where it sits. She’s been compared to Billie Holiday, but that’s not it, she complained that she was more into Bessie Smith but perhaps she has a white woman’s voice and a black woman’s soul. Her voice is kind of high and has a Country side but guess what, it’s not that either. She might be Macy Gray’s Mamma, no, ignore that, is there something Nina Simone, not tone but something?

I love this album and must find her first, It’s So Hard To Tell Who’s Going To Love You The Best (1969). She played both 12 string guitar and banjo. A contemporary of Fred Neil, Tim Hardin and Bob Dylan, she was apparently a reluctant performer who tried to avoid playing her own songs and allegedly some of them only ending up being recorded in a night at the studio because they tricked her into thinking that the tape wasn’t running. I’m sure Lucinda Williams has listened to her and I’m sure Annette Peacock has too.

A sad story that only gave birth to two studio albums. Born in Bonham, Texas (also the birthplace of Jazz great Charlie Christian), she was divorced twice before she was 21, lost two teeth stopping a fight between two of her boyfriends, was addicted to alcohol and heroin and died of an AIDS-related illness at the age of 55 whilst living in a mobile home outside Woodstock. There have been some found tapes of live performances and demos that you can find quite easily on CD or on Spotify.

It doesn’t end. Linda Perhacs released Parallelograms in 1970, again nobody noticed. Well, why would you notice a dental hygienist from Beverly Hills? One of her clients heard her demo and helped her make an album, when it did nothing she went back to work.

The album was rediscovered by the late namesake Michael Piper who lived very close to me when I lived in Brooklyn. I visited him and he gave me a copy of the CD. I was later to find he was also friends with Anekdoten who I later joined. But Perhacs was that classic Californian Psychedelic hippie singer-songwriter with great songs, voice, sound and ideas in the vein of a folky Joni Mitchell. It’s a lovely record.

Like Vashti Bunyan, this discovery led to the release of a second album 44 years later, The Soul Of All Natural Things (2014), and since I’m A Harmony (2017). It’s incredible how these artists have changed so little since their debut albums from so long ago. The soul doesn’t age and all new-fangled technological leaps can’t take away the essence of these beautiful artists and their heartfelt music.

Song Of The Day I is Parallelograms, the title track from Linda Perhacs’ debut album, released in 1970 on Capp Records.

Song Of The Day II is Something On Your Mind from In My Own Time, the second album from Karen Dalton, released in 1971 on Paramount Records.

Song Of The Day III is Some Things Just Stick In Your Mind written by Mick and Keith, originally released by the duo Dick and Dee Dee as a B-side to another Jagger/Richards song, Blue Turns To Grey, released in early 1965 on Warner Bros. and then again by Vashti Bunyan in the same year on Decca. It appeared on the Stones’ compilation album Metamorphosis, released in 1975.