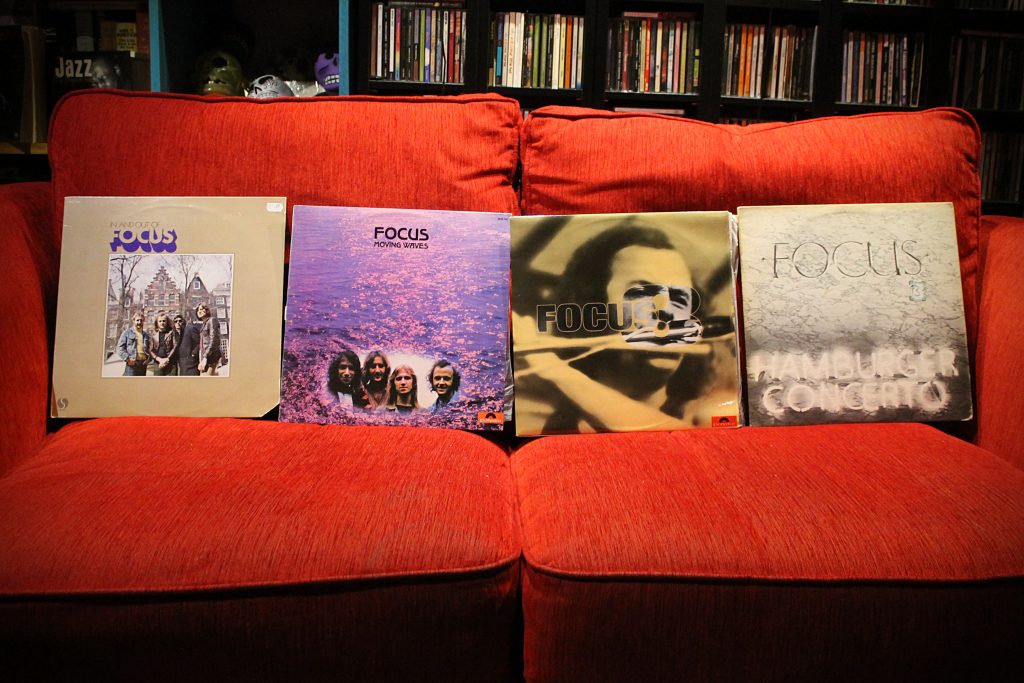 Music today started with the debut album from Dutch legends Focus. Their first album, Focus plays Focus, was released in the Netherlands in September 1970 and is the only album with the original lineup of Thijs van Leer, vocals, keys and flute, Jan Akkerman, guitars, Martin Dresden, bass, trumpet, vocals, and Hans Cleuver, drums, vocals. All but Akkerman are credited with vocals. For some reason this debut is always classed as Progressive and never as Psychedelic Progressive, but to me the vocal tracks have a sixties Psychedelic turn. Outside the Netherlands the album was released in 1971 as In And Out Of Focus with an extra track, House Of The King (perhaps on the European version outside the Netherlands, but not on my American or Australian copy?). The vocal tracks are what set this album apart from the later Focus albums and you can hear the influence of Martin Dresden who was gone by the second album. Melodic songs, nice melodies, always great guitar from Akkerman.

Later that same year with two new members, Cyril Havermans on bass and Pierre van der Linden on drums, Focus unleashed Focus II, better known as Moving Waves. It contained Hocus Pocus, that was the song that made the world take note, the single charting at No. 20 and the album reaching No. 2 in the UK charts (No. 8 in the US, No. 4 at home). Van Leer’s yodel, playful keys and Akkerman’s ice slicing guitar sound, with van der Linden’s drum breaks, succeeded in that impossible task of gaining attention with a catchy instrumental. The album though was a definite entry into the world of Progressive Rock. All the elements were there, a classically trained flautist who also played organ and Mellotron, odd timings, a creative guitar player and sympathetic drummer and bassist. What’s not to like?

They were already at it with the shorter Progressive tracks on Side 1 with Le Clochard (the beggar) and Janis. At first the third and title track sounds so like early ELP with the piano and the character of the voice, you have to check the album cover to make sure it’s really Focus. The side ends with Focus II, another lovely instrumental. On Side 2 it’s the suite (Eruption), how do they even imagine all these changes? It’s a wonderful journey with van Leer and Akkerman exchanging melodic tones over van Leer’s original visionary concept. At one point I expect to see Richard Burton and Elizabeth Taylor stride in to a vast arena where Pierre van der Linden will perform the rite for the soul of the volcano. Yes, this really should have been a soundtrack, a grandiose celebration of something spectacular with a cast of thousands.

That’s it, I can’t escape Focus tonight, those first two albums were so enjoyable. So next came the double album Focus 3, released in 1972, opening Side 1 with van Leer’s slightly mad Round Goes The Gossip before reclining on a faraway beach to Akkerman’s Love Remembered. And then they did it again with another classic instrumental single, Sylvia. It’s another van Leer composition yet with beautiful Akkerman guitar lines that van Leer must have written on the keys as they are the main theme. The song reached No. 4 in the UK chart. Carnival Fugue ended Side 1 and showed off van Leer’s knowledge of ancient music.

For Focus 3 there was another change in personnel and Cyril Havermans was replaced by Bert Ruiter on the bass guitar. Three albums, three bass players, two drummers, what was going on in the Focus camp? Musically they were on fire with van Leer’s classical and compositional skills and Akkerman’s exquisite guitar playing, every track was a journey. Side 2 opens with the title track written by van Leer, but the side is shared with an Akkerman/Ruiter composition, Answers?Questions? Questions? Answers?. Still one wonders how the opening track is a van Leer composition when it’s the guitar lines that make the difference. Did he write the melodies on the keys and play them to Akkerman or is the composition in the chord changes with Akkerman making up these great lead and memorable melodic guitar parts?

Side 3 is one long track, Anonymous II, credited to the whole band. I suppose sections might have been credited to each member, but one imagines that it all came out of a jam. This reminds me of why I love bootlegs, moments of brilliance captured in an unguarded moment, but never followed through on an official release. If you ever want to contribute anything to the archive, any seventies bootleg always works.

Side 4 continues with the Anonymus II conclusion and then the album ends with two Akkerman compositions, Elspeth Of Nottingham, and you suddenly hear how van Leer and Akkerman were on the same page in regards to influences and appreciation of music of the distant past. Lastly it’s House Of The King again and this reminds me that on the first album there’s also a track called Anonymous (credited just to van Leer), which I suppose is why Anonymous II is so called. Focus 3 reached No. 6 in the UK chart and No. 35 in the US.

Their fourth studio album was Hamburger Concerto (1974), which has those wacky fellows finding a classical theme and then calling sections of the suite on Side 2, Rare, Medium and Well Done. Notably they again changed their drummer and welcomed ex Stone The Crows man Colin Allen. At this point Focus seemed to be functioning with Akkerman and van Leer comfortably creative, but before this album they’d released Focus Live At The Rainbow (1973) but were meant to release a studio album. Disagreements in the band shelved it and it came out later as Ship Of Memories. It seems like for all their creativity there were always tensions within the band. It wouldn’t be long before Akkerman would leave, making one more album, Mother Focus, in 1975 and embarking on a solo career. Focus replaced him with Philip Catherine and Eef Albers and then they made Focus Con Proby! Yep, Focus with PJ Proby, but that weirdness is for another day.