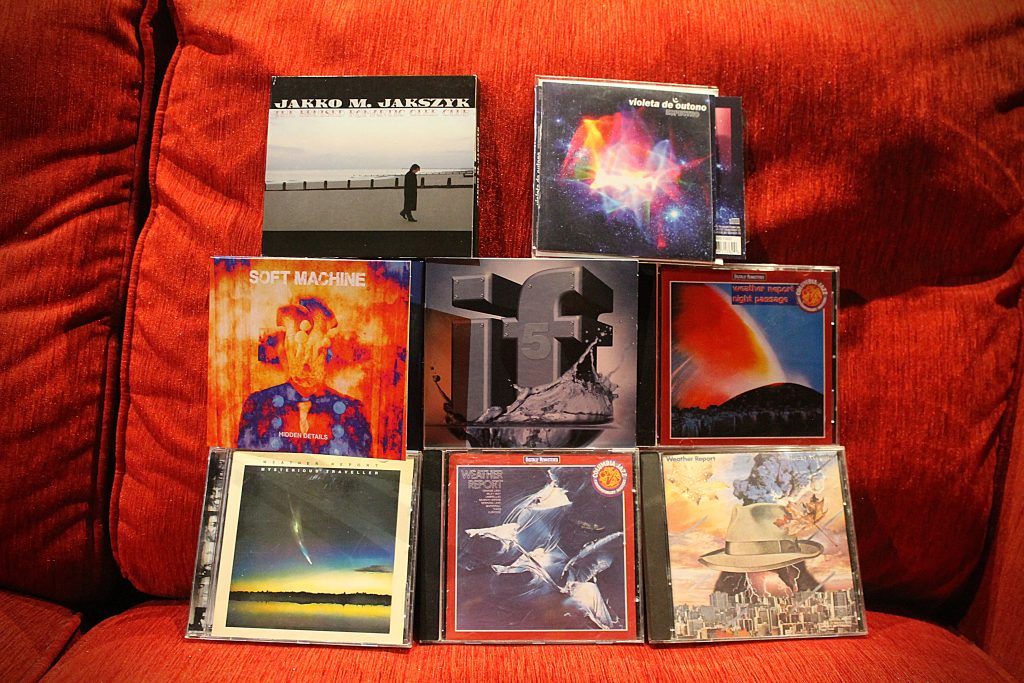 Music today has been a journey into CD land and listening to some more Progressive CDs that I recently bought including one that arrived today: The Bruised Romantic Glee Club by Jakko Jakszyk. It’s a double CD from 2006. He’s become well-known for joining up with latter-day King Crimson as lead singer and other guitarist. On his CD I’m not sure about the lyrics and the tunes but it sure has its musical moments. I’m not that into Neo-Prog, it’s all too smooth for me and the lyrics always seem weak. But it starts to get good on Disc 2 with covers of Henry Cow, King Crimson and Soft Machine. It might be worth mentioning who plays on this record because you might not believe it: Drummer Gavin Harrison (Porcupine Tree), acoustic bassist Danny Thompson (Pentangle, John Martyn), guitarist Robert Fripp (King Crimson), sax and flute from Mel Collins (King Crimson, Roger Waters), electric bass from Mark King (Level 42), piano and keyboards from Dave Stewart (ex-Hatfield & The North), drummer Ian Wallace (King Crimson, Bob Dylan), Soft Machine bassist Hugh Hopper and ex-Groundhogs drummer Clive Brooks.

I also recently got the newest If CD, If 5 from 2014 and oh my, I really didn’t like it. It was very light middle of the road Jazz, not my cup of tea at all but if you don’t try you never find things you do like. I’m always surprised how many things I find by taking a chance but this time it didn’t work at all. Somebody out there likes it though, each to their own.

Fabio Golfetti is one of the guitarists in Gong but he also has his own band, Violeta de Outono. Olivia and I have also got to know singer/guitarist Kavus Torabi a little from Gong and Olivia has hosted the band at Night Of The Prog. So Fabio sent us CDs of his Brazilian band, based in São Paolo, and I played one of them tonight, Espectro from 2012. I really enjoyed it, sounded like Camel at one point, recommended for any Prog head. And on this point, I am trying to catch up with the records friends have sent too (The Churchhill Garden, Mellow Drunk and Anekdoten Live in Japan 1997), getting there.

Another recent purchase has been the latest Soft Machine album, Hidden Details, from 2018 – this is more like it. It’s Jazz Fusion, edgier and Progressive and John Etheridge is a mean guitar player. Theo Travis on things that you blow (saxes and flute) and Fender Rhodes, Roy Babbington on bass, John Marshall on drums. We played with them at a festival in Italy and Theo jammed with us (Anekdoten).

I finished off the night with four Weather Report albums: the debut (1971), Mysterious Traveller (1974), Heavy Weather (1977), and Night Passage (1980), but I have to admit they were kinda low on the stereo because Olivia and I were trying to sort out the archive, it was background music so I missed all that virtuosity from Joe Zawinul – keys, Wayne Shorter – sax, Miroslav Vitouš/Alphonso Johnson/Jaco Pastorius – bass, Alphonse Mouzon/Alex Acuña/Peter Erskine – drums, Airto Moreira – percussion. It’s the kind of music you can study, listen or potter about to and today it was tidy up music.

Song Of The Day is Starless by King Crimson live in 2016 (with three drummers) and with Jakko Jakszyk singing.