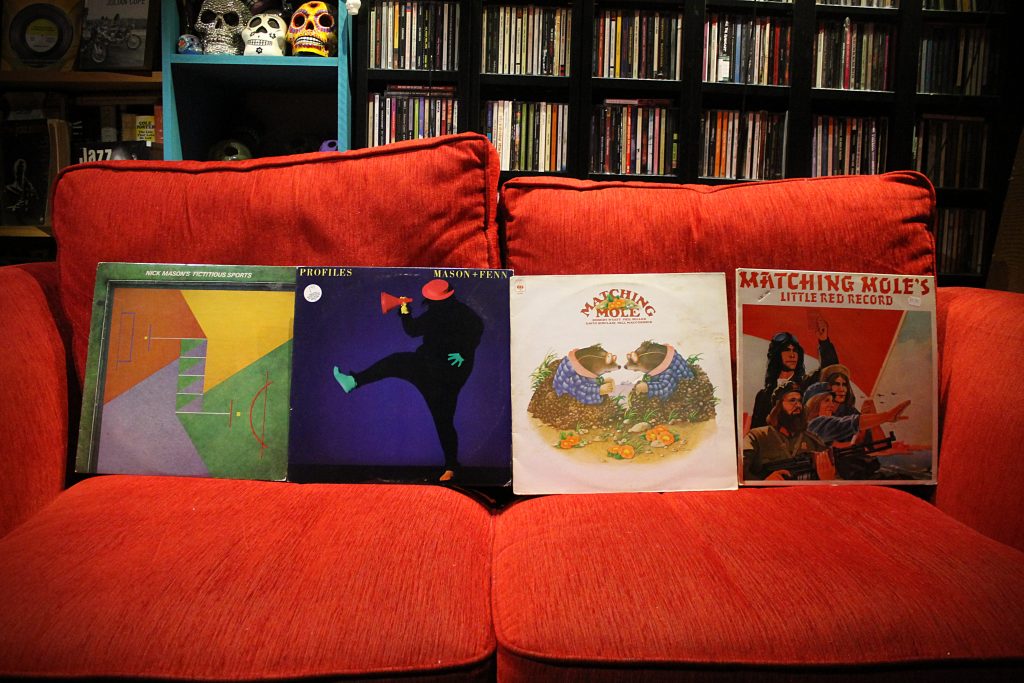 Music today has taken a dive into the area of obscurity, executed by people who you might not have thought had it in them. I suppose you might consider Pink Floyd a non-mainstream band even though they were absolutely massive. In 1981 Nick Mason, Floyd’s drummer, came up with a weird album with a weird band, weird songs, weird artwork, and a weird name. Which for me is exactly what we want from people who don’t need to survive on music, people who can just make music for its own sake. It’s always disappointing to hear someone who you know could actually be interesting, not being.

So when Nick Mason came up with Nick Mason’s Fictitious Sports it was wonderfully odd and music to my ears. His band was avant-garde experimentalists, jazzers and old friends. All the songs (but one) were written by Carla Bley (who I have written about before). The singer is Robert Wyatt from early Soft Machine and Matching Mole. Chris Spedding plays guitar. That might be the only people you know who play on this record unless you are into intellectual musical nuts like Michael Mantler. (Mantler once refused us, Noctorum, the use of a sample from one of his records, ha ha). If you are interested in the album lineup go here.

The songs are amazing, made more amazing by Robert Wyatt’s fantastic voice (first weird track is different and so odd that I encourage you to listen to it as I can’t explain it). The album generally is an arty melodic extravaganza. Interesting words, melodies, production (thanks Carla for your weirdness). It’s sometimes like Gong, sometimes New Wave, sometimes Progressive, sometimes Jazz, and often tongue in cheek. It’s like the thing that David Byrne has, look at me I’m pretending to be nerdy but actually I’m being ironic and I’m not only intellectual but extremely hip. Unlike Byrne this record isn’t grooving, but the melancholic Do Ya? is heart-wrenching.

This album piqued my interest as to where Nick went next. Well, it was 1985 so it was in-between The Final Cut and A Momentary Lapse Of Reason. He got together with later ex 10cc member Rick Fenn and made some decidedly eighties-gated drum noises whilst Rick made some decidedly eighties guitar noises. The album is credited to Mason/Fenn and is called Profiles. I wasn’t sure whether I was going to love it or hate it, the eighties are often really a challenge to listen to from 2020, whereas the sixties, the seventies, the nineties, the noughties etc, aren’t. It was the period when the men that made machines and the men that knew how to work them got all the power, thankfully we wrested it from their grasp, eventually.

The first track was instrumental, the second track Lie For A Lie sounds like Gilmour singing and then I realized that that’s because it is. It’s almost funny listening to this album, I wonder how old Nick feels about it, all these years later. I guess Peter Gabriel was the man to follow if you were successful and looking to explore, but somehow Gabriel’s solo records are more listenable. Perhaps the songs themselves, his voice, the words.

Oh how they were seduced by those drum sounds. When you think of his wonderful understated organic drumming on the Floyd albums you might wonder if he had been desperate to escape into a more drum dominant world, well he certainly did that here. The problem is that it falls between the cracks of all the best music from the eighties, like, erm, well, say Tears For Fears and their sound. Profiles was released the same year as Songs From The Big Chair and although it’s obviously not the song-inspired album that Tears For Fears made it reminds you of the era. To be fair there’s some encouraging moments but rich Nick had a little too much influence and bought into the eighties sound far too much. The mostly instrumental compositions would have been so much better with a little restraint on the over the top overdubs as with the title track that ends Side 1. There are some great sounds that one imagines were keyboards but seems to be processed guitars (it must be both) and it’s almost in experimental Frank Zappa synclavier territory (Jazz From Hell).

The opening track on Side 2 is the only other vocal track, sung by Danny Peyronel. It’s over the top and it makes ABC sound like Leonard Cohen, ok sorry, not that extreme but you get the picture. This is an album that is so of its day but it must have sounded great then or should I say it must have sounded so modern. But as is often the case, the modern ‘now’ soon fades into the future. Somewhere in here there is a really good record but you have to be really forgiving and not blame them for their sonic drum blindness. It would be like blaming Florence Nightingale for wrapping wounds in used bandages.

Talking of medicine it’s hard to just take one dose of ‘elixir of Wyatt’ and after Nicko’s excursion into the eighties, I had to take another spoonful of Robert Wyatt and his Matching Mole. This first album released in April 1972 is one of my favourite records with the beautiful O Caroline as its opening track. Talking of the eighties I remember the band being asked to play some tracks on a radio station, I think it was Perth, mid-eighties and I chose this. The DJ hated it, ha ha, it was everything that that period of time wasn’t. It’s so weird how people get sucked into an era or a style and then find it hard to shake off. I guess if you’re into fifties Jazz, you have some trouble with Twisted Sister. I’ve been playing a lot of sixties and seventies records in recent weeks but it’s kind of an exploration of the archive and seeing what’s missing. I have lots of new records, too, I’ll get to them at some point. I did just buy a new CD, too – the latest Soft Machine album! So there!

In the meantime, here I am with Matching Mole, there’s actually two albums released in 1972, the second, Little Red Record, was released in November. You of course all know that it’s a play on the French ‘machine molle’ (soft machine). Although depending on who you ask and which translation device you use ‘machine douce’ is actually ‘soft machine’. Although douce by itself means sweet. This is why I’m learning French.

You may remember that I recently played a Phil Miller album, well he was the guitar player in Matching Mole with Bill MacCormack on bass and Dave McRae replacing Dave Sinclair for the second album on keys. Eno is there on album two as is Fripp in the producer’s chair. In the credits it says, “Musicians in order of beard length or in beard length order”.

Fascinating fact, the credit for Ruby Crystal (Der Mütter Korus) is a pseudonym for Julie Christie who all film nuts will know – if you don’t, you might recognize her from her portrayal of Madam Rosmerta in Harry Potter and the Prisoner of Azkaban.

These albums are wonderful Canterbury, jazzy, arty, Progressive jamming with interjections from Wyatt’s beautiful voice. I love it. One might consider it to be the most relevant of records to play today, the opening track on Little Red Record is called: Starting In The Middle Of The Day We Can Drink Our Politics Away.