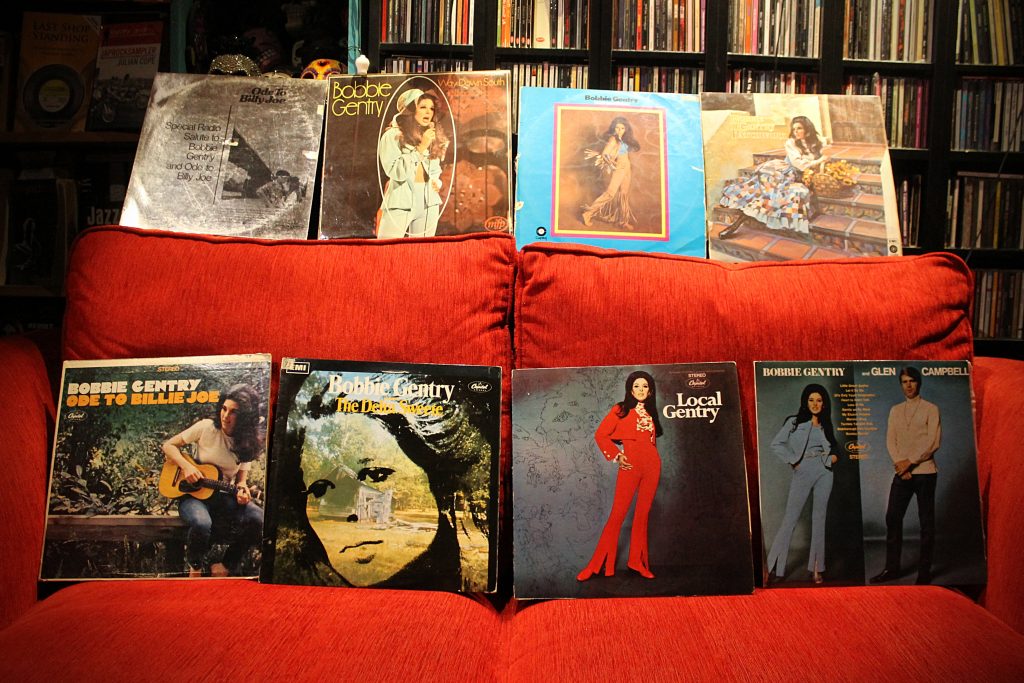 Music today is Bobbie Gentry and it’s a little tricky to describe her and how great she is. She’s not exactly Country, not exactly sixties, not exactly Soul but she has a certain je ne sais quoi (I told you I was studying French). She released her first album Ode To Billie Joe in 1967 and suddenly found herself with a massive hit single and album both reaching No. 1 on the US chart, the album knocking Sgt Pepper’s off the No. 1 spot on Billboard. This first album is actually Gentry’s original demos, all sorts of overdubs added later. There’s a few moments on the record where the guitar seems to have the same intro as the hit but then turns into another song, I guess people have their thing. Initially she was only singing the songs and taking her tapes to Capitol records to have other artists sing them. They heard the demos and signed her. This first album has her seductive soft yet husky voice telling riveting stories about everyday life. On Ode To Billie Joe (which I bought when it came out) the story has you captivated right from the beginning. It’s so vivid, like seeing a film. It’s emotional, tragic, clever, a classic. Somehow the next single, I Saw An Angle Die, didn’t chart. Gentry wrote all the songs bar one, Niki Hoeky, written by Lolly and Pat Vegas from Redbone. You may remember Witch Queen Of New Orleans. The song was covered first by PJ Proby, then Gentry, then Aretha Franklin, also Duane Eddy, Ellie Greenwich and Burton Cummings. What does it mean? Well I’ve heard it called Cajun patois. 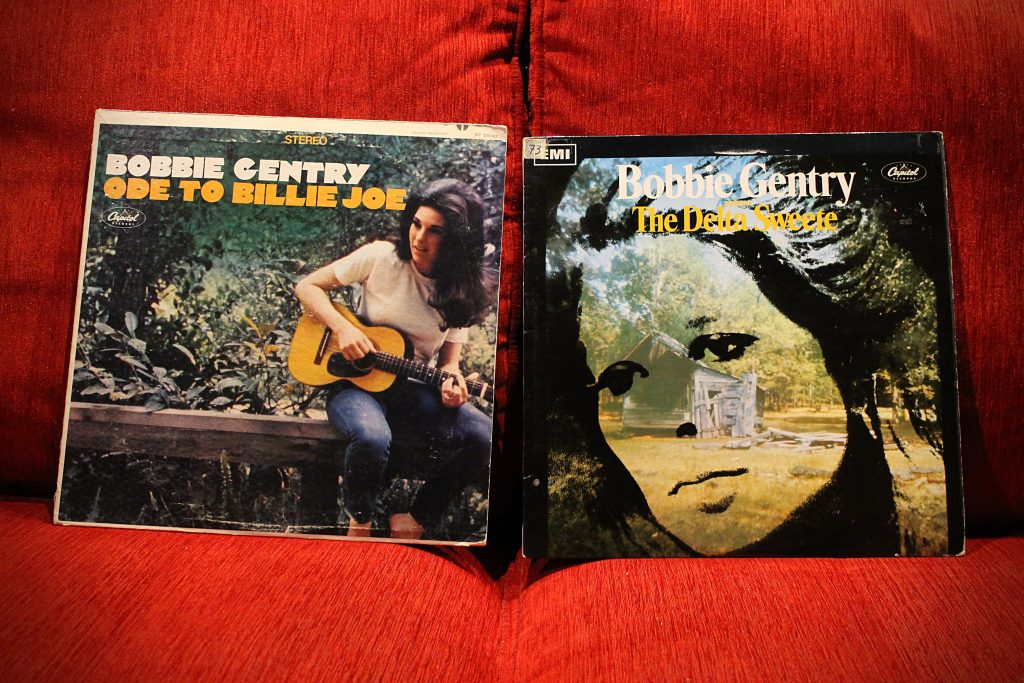 Her follow up album was the super cool The Delta Sweete (1968) which, by the way, was recently covered by Mercury Rev as a tribute with eleven female singers and an added track, Lucinda Williams singing Ode To Billie Joe. The Delta Sweete was even better than the first album but it was a commercial failure, only making it to 132 on the Billboard chart, how does this happen? There’s a reissue coming out soon that’s a bit pricey but my original copy has been owned by either a cat, a parrot or a hen so I may have to sell the food to buy the re-release. On The Delta Sweete, Gentry continued with her vignettes of life on a farm in the Mississippi Delta where she grew up with her grandparents. Her voice was perfect, her lyrics poignant as she found her folky side, never actually able to be completely pigeon-holed she wrote 8 of the 12 songs on the album. She covered Mose Allison’s Parchman Farm and John D. Loudermilk’s Tobacco Rd, violinist Doug Kershaw’s Louisiana Man and the standard Big Boss Man (covered by Elvis). She saw herself as a writer rather than a performer but when you see pictures of her and her fashion sense you just can’t wait to see her live (the press seemed to be enamoured by her look). The album title is a play on words, ‘sweetie’ a term for a Southern Belle (not sure how that sits in today’s climate but notice the spelling), because the album is also presented like a suite. Beautiful songs, Jessye’ Lisabeth is wonderful. (I guess that’s her sister.) If you live in England you may stumble across the cheap Music For Pleasure label version of the album with different artwork called Way Down South – it’s the best 50 pence you’ll ever spend. 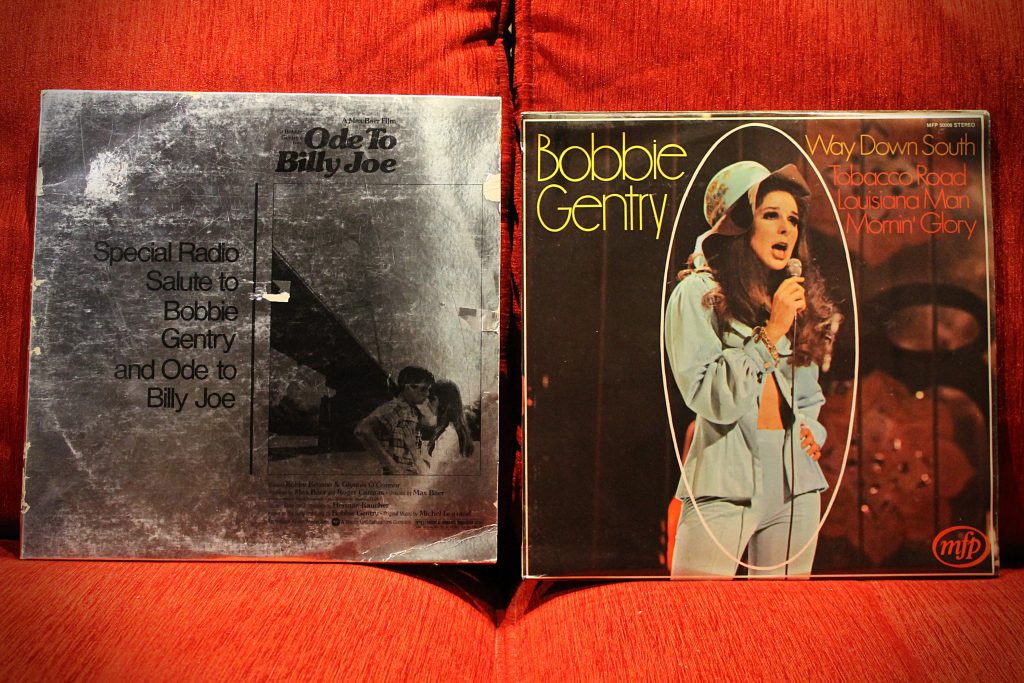 In the same year she released Local Gentry. On the cover she’s wearing the best trouser suit you’ve ever seen. Like its predecessor it failed to chart anywhere despite its quality. At this point she was falling through the style cracks and being good didn’t seem to be enough for the public record buyers, what was she? The album has 5 original songs, opening with Sweete Peony, followed by Casket Vignette, narrative songs with scary strings, it’s hard to know why nobody bought it. It even somehow fits into a Psychedelic Pop style and on top of that the album has three Beatles songs, The Fool On The Hill, Eleanor Rigby and Here There And Everywhere (or should I say three McCartney songs). There’s also Come Away Melinda written by Fred Hellerman (The Weavers) and Fran Minkof. You might not have heard Harry Belafonte’s version or The Weavers’ version but possibly you’ve heard it by Uriah Heep or UFO. Barry St. John had a hit with it in 1965 (who by the way was a girl). There’s the Tim Rose version and then there’s the Velvett Fogg version, pre Black Sabbath Tony Iommi’s band. I digress. 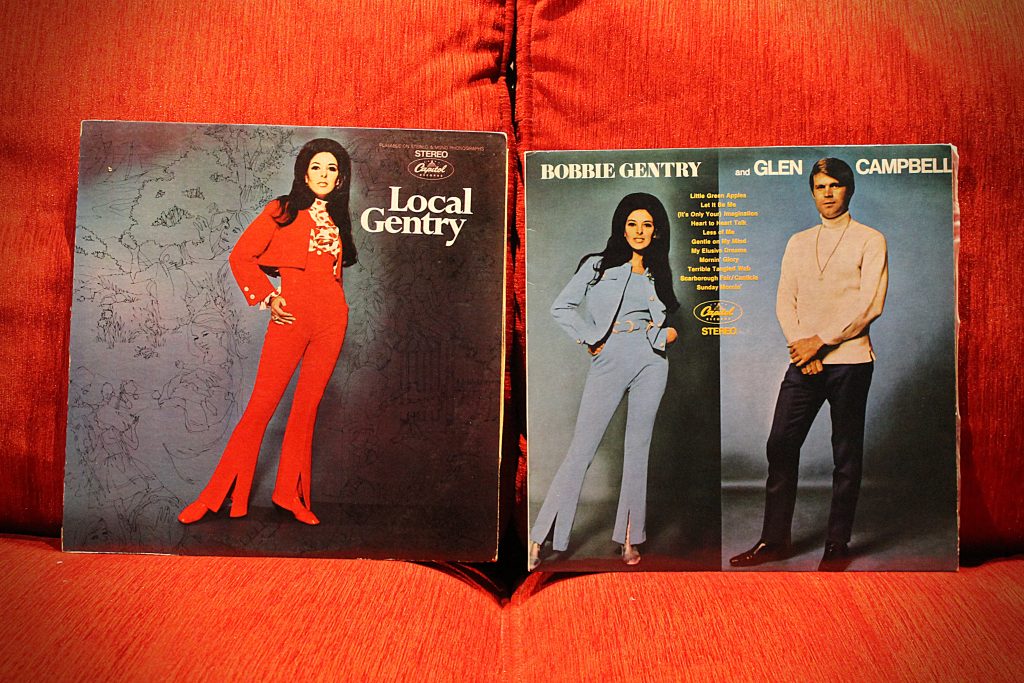 After Local Gentry and three Kelly Gordon produced albums of which one went nuts and two did nothing, somebody came up with a bright idea and paired Gentry with Glen Campbell. Gordon must have been as relieved as Gentry but it is so ridiculously middle of the road. The album was a big hit, No. 1 on the Country chart, No. 11 on the Billboard chart, third time lucky for 1968. There was only one Gentry song on there, Mornin’ Glory (originally on The Delta Sweete) opens Side 2. Two Glen Campbell songs but the rest were covers, Gentle On My Mind, Little Green Apples. Boudleaux Bryant’s All I Have To Do Is Dream reached No. 27 on the Billboard chart. Let It Be Me was a small hit. Even with a successful album Gentry couldn’t find that elusive mega hit single although getting into the Top 30 in 1968 was no mean feat.

In 1969 she tried again as a solo act and a new producer, Kelso Herston, with Touch ‘Em With Love (ooh it’s scratchy, need a new copy). Recorded in Nashville it had no original songs. Somehow one of the covers, I’ll Never Fall In Love Again made it to No. 1 in the UK and No. 5 in Australia but the album and singles stalled in America. Although the album made No. 21 in the UK it could only muster No. 164 in the US. It had Jimmy Webb’s Where’s The Playground Johnny (Suzie) and Son Of A Preacher Man, but nothing happened. 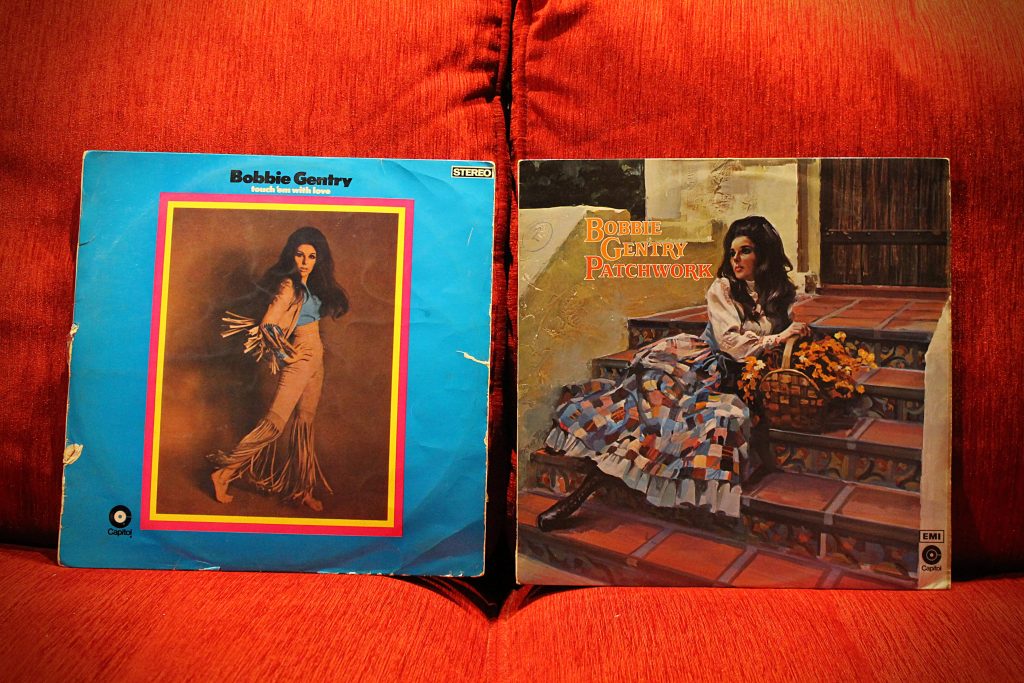 Gentry had seriously fallen through the cracks but found herself in the Easy Listening realm (No. 8 on the Easy Listening chart). But only No. 96 on the Billboard chart. It’s as if she was led the wrong way. Her 1970 album Fancy (called I’ll Never Fall In Love Again in the UK, neither of which I have) made it to middle chart positions but Gentry’s patience seemed to be running out. She made one more album, Patchwork, that she wrote and produced before retiring from music. (Between the tracks there are 7 instrumental interludes, she was an innovator.) She also painted the cover. Despite good reviews the album only made it to 221 on the Billboard chart. After just five years she was done. If Gentry had been left to her own soulful meanderings, she could have made record after record of autobiographical classics, but the business got in the way or perhaps starting with a No. 1 single was a disaster waiting to happen in the future, the record company chasing the prize and promising her it would be worth it. There’s great moments on all of her albums, there could have been many more, but it just wasn’t to be.

On the video below it states in the text that she called the song Ode To Billie Joe “A study in unconscious cruelty”. In 1976 there was a film made using the song as a theme – Billy with a ‘y’. Bobbie Gentry is still alive and is now 77 years old.

Song Of The Day is Bobbie Gentry’s Ode To Billie Joe – Live from the BBC in 1968.