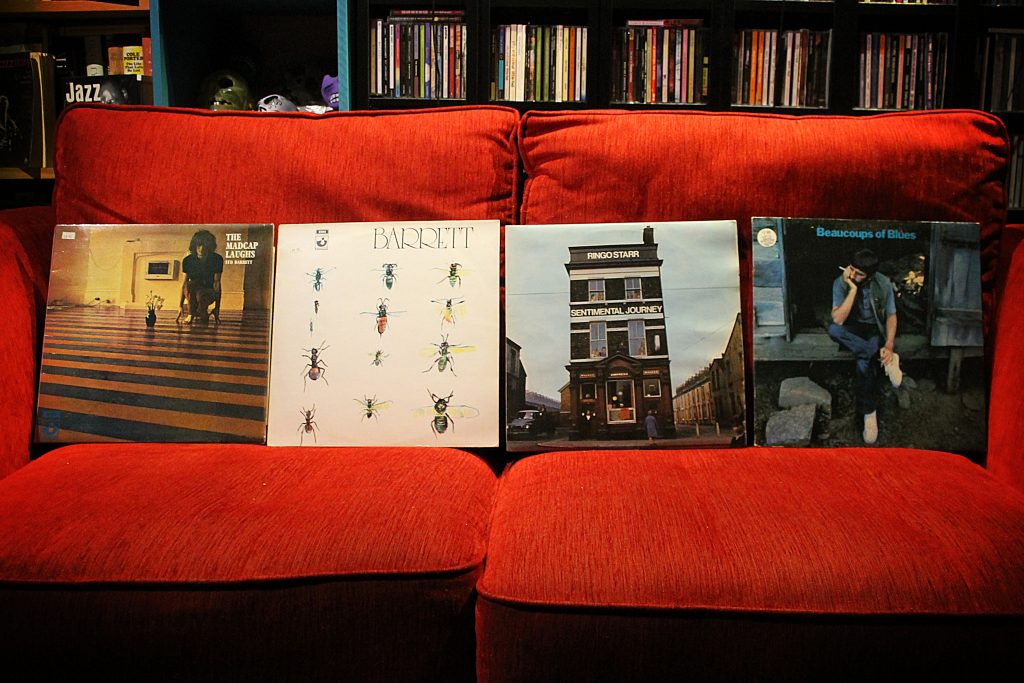 So, music today celebrates life and death – 14 years ago today Syd Barrett died, 80 years ago today Ringo Starr was born. So I started tonight’s music with Syd’s first album The Madcap Laughs released in the UK in 1970 (not in the US till 1974). It opens with Terrapin, a collapsing gem, “Oh baby my hair’s on end about you”. The genius of Syd was his quintessential Englishness, even though at this point his state of mind was uncertain he still managed to execute his unique lyrical and melodic trip – no pun intended.

No Good Trying and Love You star Soft Machine as the band, Robert Wyatt on drums, Mike Ratledge on keys and Hugh Hopper on bass, Syd on guitar and vocals. The guitars seem to have a life of their own and one supposes that because Soft Machine were so used to odd timings, Syd’s structures somehow made sense to them. No Good Trying is a wonderful mood and melody and Love You with Ratledge’s bar room piano and the oddest time is catchy as hell, it’s like a song from a bizarre circus. No Man’s Land features Humble Pie’s Jerry Shirley, playing a steady beat through Syd’s layered guitars. One imagines it’s also Syd on bass, there’s no musician credits on the album sleeve. Dark Globe, produced by Gilmour and Waters, is an eccentric masterpiece of melody and inventiveness. The childlike Here I Go also has Gilmour in the control room and Shirley back on the drums, who seems to be not quite sure what he’s supposed to be doing. Anybody that is a Syd fan knows everything about him, so any deep analysis of these songs (should you want an analysis) can be found on the net starting with Wikipedia.

Side 2 opens with Octopus and then Golden Hair, produced by Syd and Dave, Willie Wilson on drums probably – two classic songs (aren’t they all?). What might be the best thing to do with Syd Barrett is to read all the lyrics whilst listening for maximum enjoyment. Side 1 is produced by Malcolm Jones except Dark Globe. Gilmour and Waters are back on Side 2 with Long Gone. The songs are just so full of ideas, lyrical, musical, this track could maybe have appeared stylistically on A Saucerful Of Secrets. She Took A Long Cold Look has that unnerving Syd timing and it sounds like he’s stalling as he looks at the words. One doesn’t wonder too much about where his head was at, it is what it is, but it’s more where the others in the studio’s heads were at hearing the fractured genius at work. Feel is pure poetry perhaps expressed clearly in Syd’s head as he seemingly randomly changes chords in the imaginary instrumental part, you can hear that he’s hearing something. If It’s In You captures the struggle and the vision. The last track produced by Peter Jenner and Malcolm Jones has that early Floyd sound in his voice and melody. One wonders how this album would have sounded with Rick Wright and Nick Mason perhaps the only ones (with Gilmour and Waters) who could have captured it. In the end what is captured is not the failing of a mind but the beautiful imagination of the adult child.

The second album, Barrett, also released in 1970, opens with Baby Lemonade with Gilmour in the producer’s chair and Rick Wright on keys throughout the record. Jerry Shirley and Willie Wilson are recalled on drums. It’s sonically more of a full band sound that continues on to Love Song and Dominoes with its melody, that backwards guitar and catchy little melody in the chorus (Gilmour on drums). It Is Obvious, Rats and Maisie really are meandering, but I imagine that then it was hard to get a measure of the songs and which worked and which didn’t. Can you imagine some of the takes if these were the ones they kept? You also have to remember that these guys were in their mid-twenties, trying to sort it all out. Syd was gone, not just from the Floyd – they were all so young. There would have been lots of drugs and alcohol – it was sixties London, wow, what a scene it must have been.

Gigolo Aunt opens Side 2, “I know what you are, you’re a gigolo aunt”. You can hear from this song how Robyn Hitchcock loves Syd, that mix of absurdity, deadpan humour, creativity, eccentricity, the wonderful English madness. Waving My Arms In The Air/I Never Lied To You were next. This quote from Rick Wright (Wikipedia) helps understand the process:

Doing Syd’s record was interesting, but extremely difficult. Dave and Roger did the first one and Dave and myself did the second one. But by then it was just trying to help Syd any way we could, rather than worrying about getting the best guitar sound. You could forget about that! It was just going into the studio and trying to get him to sing. – Richard Wright

The album ends with Effervescing Elephant and shows the happy heart that lived somewhere in that impossible head. Barrett drew the cover art, but despite Gilmour and Wright’s attempts to help Syd the album failed to chart and wasn’t released at all in the US till later along with The Madcap Laughs. Syd was done and perhaps it all makes sense with this recollection from Jerry Shirley:

He would never play the same tune twice. Sometimes Syd couldn’t play anything that made sense; other times what he’d play was absolute magic. Barrett’s direction to the other musicians were limited to pronouncements like, Perhaps we could make the middle darker and maybe the end a bit middle afternoonish. At the moment it’s too windy and icy. – Jerry Shirley

Today is also Ringo’s 80th birthday. When The Beatles broke up in 1970 Ringo was hitting 30. It’s hard to imagine that after the demise of The Beatles he would already be in the studio and in that year he actually released two albums, Sentimental Journey and Beaucoup Of Blues. The first is an album of standards like Night And Day, Whispering Grass, Bye Bye Blackbird, Love Is A Many-Splendored Thing and Have I Told You Lately That I love You.

It has been seen as lovable as much as it was savaged, Harrison called it “Great”, Lennon called it “Embarrassing”, but with the picture on the cover of The Empress in Dingle where a poor Richard Starkey grew up it makes complete sense. (His relatives are superimposed in the windows.) It was songs that the relatives sang. You can image them in the pub having a sing-song. It sold 500,000 copies in the USA. When Olivia and I went on the Beatles Tour, we parked right outside the pub where the photo was taken.

In the same year he made another odd record, this time with Country songs. Beaucoup Of Blues was produced by Pete Drake and followed up on Ringo’s interest in Country music. As you know The Beatles had covered Buck Owens’ Act Naturally and Ringo had sung it, then there was What Goes On that he co-wrote, Don’t Pass Me By that he wrote. The album didn’t do as well as Sentimental Journey but has a reputation of being a proper album despite its abrupt change of direction which really wasn’t as big a shock as Sentimental Journey. It took just two nights to record. The late Charlie Daniels played violin (he died just a couple of days ago). Ringo would take a break and concentrate on his acting until he came back in 1973 and had a big hit with Photograph, returning to a musical format that the public could understand. Happy Birthday, Ringo.

Song Of The Day is See Emily Play, I still have the original single that I bought in 1967.

Syd Barrett – The breakdown of Syd as told by his sister and band members – Radio Broadcast 09/06/11: