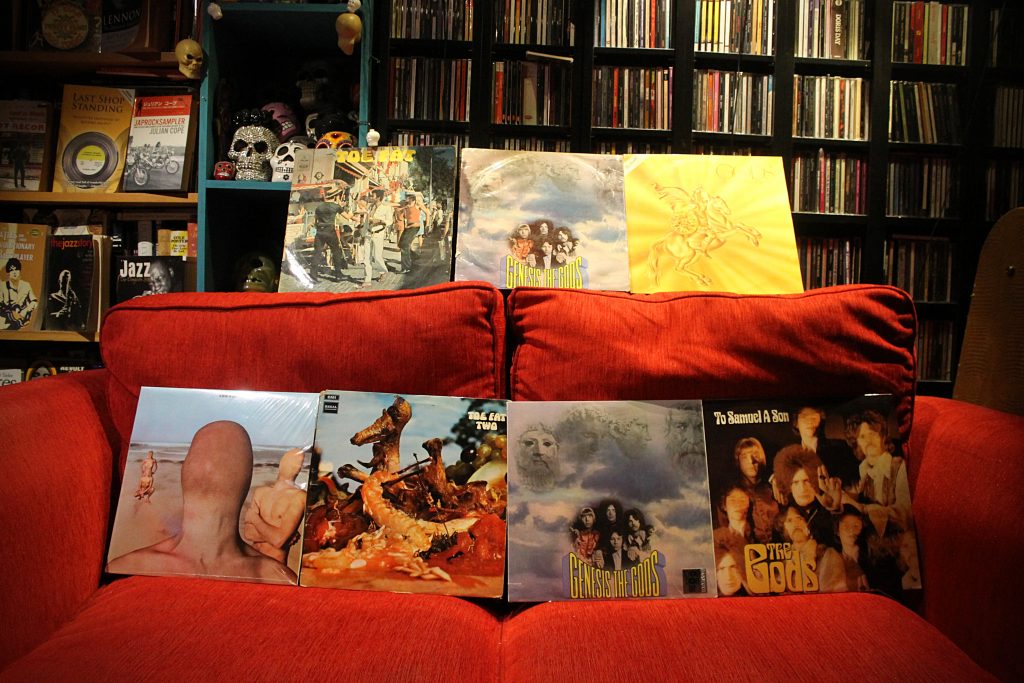 Music today was the odd transition of sixties Pop star Cliff Bennett who had considerable success with The Rebel Rousers but then grew his hair (like everyone should) and formed the heavy riffing Toe Fat with ex members of The Gods who were to be future Uriah Heep members – Ken Hensley on guitar and keys and Lee Kerslake on drums. Another God John Konas played the bass. They released both their albums in 1970, Toe Fat and Toe Fat 2. 1970 seems to be the year to release two albums, yesterday it was the two Syd Barrett albums and the two Ringo albums, the day before it was the Triumph Vitesse with its twin headlights. Both albums have the sound of the era but because it’s Cliff Bennett they aren’t all out Heavy Rock, you can occasionally hear that he might have been in a sixties band before the musical climate changed.

There’s vague signs on the first album that Uriah Heep seeds may have been planted in Hensley’s head, but Hensley is the main guitarist whereas the main Heep guitarist was the immortal Mick Box (met him once, nicest guy). So the sound isn’t quite right yet and this album suffers from being a little too much wasp caught in a bottle guitar sounds rather than scary men with long hair and giant earth-shuddering amps. The songs aren’t so great either.

The problem lies in the fact that Bennett is writing all the songs (bar three covers) and not really getting to grips with what 1970 wants. There’s moments in the songs and the guitars but they’re few and far between. Interestingly the second song is an early Elton John/Bernie Taupin song, Bad Side Of The Moon, which was an extra track on the CD release of Elton’s self-titled second album. There’s a rocked up Nobody written by Soul writing duo Dick Cooper and Ernie Shelby. Another track, The Wherefores and The Whys has that Heep sound in the vocals, so I imagine that although it’s written by Bennett it must be sung by Hensley and at this point I realise that part of the problem is Bennett’s voice, if Hensley sang them all I might like it more. There’s a horrible version of Just Like Me, covered earlier by The Hollies and The Coasters. It’s that sixties singer missing the point of now, that is 1970. Still Paul Rodgers sang a bit like this – but somehow he was just better.

But here in the archive we are as interested in cover art and both Toe Fat albums are grotesque moments in design history. Apparently they were trying to come up with a really horrible name, they succeeded, but then needed cover art to reflect the horrible image that the name suggested and of course the perfect people for this monstrous task were the good folks at Hipgnosis who incidentally were also responsible for The Madcap Laughs (see yesterday). So there’s naked figures on the cover who instead of having heads, have big toes, even the lady. It’s actually a great piece of bizarre weirdness out of the imaginations of fearless creators.

By the second album Hensley and Kerslake had gone. Another ex God Brian Glascock joined on drums, Alan Kendall joined on guitar. Later Brian’s brother John replaced John Konas before going on to join Carmen and playing with Chicken Shack and then Jethro Tull before tragically dying of a congenital heart defect at 28. It’s not actually clear who did what on the album as the album covers have pictures of members that weren’t on the albums. In a way Toe Fat 2 is a better record because at this point the guitar sounds were a bit less buzzy, There’ll Be Changes has a cool Bluesy wah-wah solo. Kendall co-wrote all the songs with Bennett but the ideas are the same and the singer is the same and it’s disappointing because this band on paper looked like it might have been a lost gem of the era.

But still we have the grotesque artwork part two! The second album has attempted to use old food – chicken legs, a shrimp, melon seeds, grapes and God knows what else as an environment for miniature toe-headed men and women to hang out. It’s Hipgnosis again (of course it is) and another classic album cover in the archive. On the subject of the cover art, I also have an original Argentine copy of the first album and there are no toe-heads to be seen anywhere, it was just too much for the Argentine public. Apparently the US cover has a sheep where the naked toe-headed woman is (of course, makes sense).

My Toe Fat 2 is an original copy on Regal Zonophone and like my original Argentine first album (on Odeon Pops) they have seen better days, but you can still play them and it’s nice to have original copies especially of the Argentine rarity which I bought in Buenos Aires. My Toe Fat 1 is a re-release and is on red vinyl, released by Soundvision, an original Parlophone version would be pricey.

I have an original copy of the Genesis album by The Gods and I have a Record Store Day reissue, so I can feel the original and listen to the brand new one. The album like Toe Fat 1 was allegedly released on Parlophone but two years earlier in 1968. I say allegedly because my original UK copy is on Columbia, my reissue on Parlophone. Nerds, where are you? The lineup has Hensley singing and playing organ, Kerslake and Konas playing guitar – it was bass in Toe Fat? – also he seems to have been called Joe in The Gods and John in Toe Fat? Supernerds will have to figure that one out, too. He certainly had a better tone than buzzy Hensley. The album has some great crossover Pop Psychedelic on the way to Progressive moments like the Konas/Hensley penned track Looking Glass. The songs are generally better than the Toe Fat songs and were written by different teams of Konas/Hensley, Konas/Kerslake or Hensley/Konas and Konas alone with two Sugarman/Robertson songs, Radio Show and Plastic Horizon, opening Side 2. Who are Sugerman/Robertson?

In 1969 The Gods made To Samuel A Son, not as good. My copy is another Soundvision reissue. When I bought it, the man in the shop (in Hamburg) said there’s something wrong with the pressing. He said it was low volume. Well, that might be true but it’s like listening to a bootleg, you get used to it and it is sixties so it’s going to be missing some of those modern frequencies, bottom end and level. (It seems like Side 2 isn’t a problem but now I hear the issue clearly.) What we lose on technological shortcomings we gain in visions of the sixties creative mind. I remember reading somewhere that when stereo arrived The Beatles treated it like it was a fad and asked why would you want to hear music out of two speakers instead of one? Apparently they paid little attention to the stereo mixes of their later albums and lots of attention to the mono versions. This second Gods album seems lost between the sixties and the seventies and you can see how they felt like they needed to form Toe Fat to escape the clutches of the sixties Pop, but unfortunately they did it with another man trapped in the sixties.

Before Heep there’s one more band and album to check out, Orgasm by Head Machine (1970), probably the best of the pre Heep lineups – but just on Spotify. Later when Uriah Heep were born, they were talked about as the worst band ever along with ELP (Greg Lake was also in The Gods for a time). They were the first band I ever saw at Liverpool Stadium on The Magician’s Birthday tour (I think), I’ve always had a soft spot for them despite what the cool kids say, it’s the same with ELP who I saw at the Empire Theatre on the Brain Salad Surgery tour (that I remember for sure). One thing about writing is that it helps you remember things and a lot has happened since 1958.