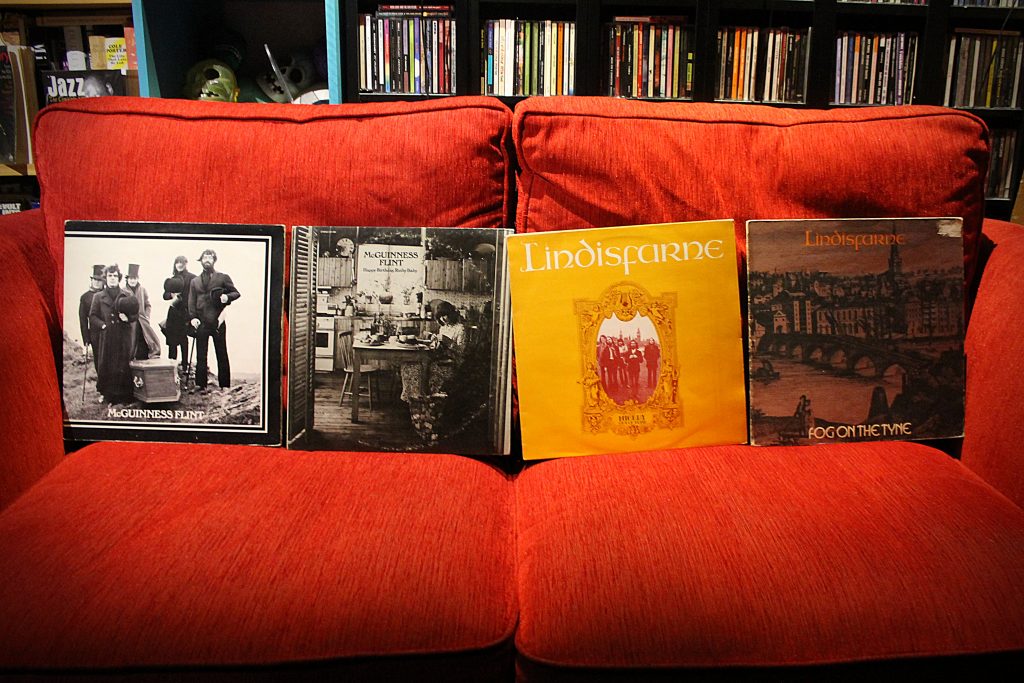 Music today had me thinking about those bands whose music is somehow irrelevant now, whereas once they had a contemporary sound and were riding high in the charts. Case in point was McGuiness Flint who had the same idea as Fleetwood Mac, naming the band after Tom McGuiness ex Manfred Mann guitarist and bassist and Hughie Flint ex John Mayall drummer. They teamed up with singer/keyboard player and songwriting team Graham Lyle and Benny Gallagher who sang, played guitar, bass and keys. Their first album was released in 1970 and it all started well, the first single, When I’m Dead And Gone, reached No. 2 in the UK singles chart and even reached No. 47 in the US – the album went Top 10 in the UK. Most of the songs were written by Gallagher and Lyle and things were going famously. Gallagher and Lyle even wrote another hit, Malt and Barley Blues that reached No. 5 in the UK charts.

But all was not well, one camp wanted to play live, Coulson/Flint/McGuinness, the other concentrate on the studio Lyle/Gallagher. Instant success had caught them by surprise and they were struggling to play the songs live and then illness hit the band and the first tour was cut short. They made another album, Happy Birthday Ruthy Baby (1971), mostly written by Gallagher and Lyle and it failed to chart. Gallagher and Lyle left and went on to be a successful duo in the UK with two top ten hits on their fourth album Breakaway, Heart On My Sleeve and I Wanna Stay With You (you may remember them). The title track was also a small hit and recorded by Art Garfunkel. These guys got around, originally being signed as songwriters for Apple artists, they wrote International, Fields Of St Etienne, Heritage and Sparrow for Mary Hopkin. In 1983 Don Williams had a No. 1 Country hit in America with Stay Young. Even later Lyle wrote What’s Love Got To Do With It and nine other songs with Terry Britten for Tina Turner, hm, nice house bro.

When I hear these two albums, I wonder at the musical climate. It’s mellow, it’s not very challenging, the songs are not as good as The Beatles or Elton John or David Bowie. So, they are pretty much forgotten. Thank you, goodnight. But they did carry on (replacing their lost songwriters) with an album of unreleased Dylan songs called Lo And Behold (Dixie Dean joined on bass). Coulson left and Lou Stonebridge joined on keys and Jim Evans on guitar and they recorded Rainbow in 1973 and C’est La Vie in 1974. They broke up in 1975 – Bye bye and not really remembered.

I remember Lindisfarne fondly from the early seventies. Their second album Fog On The Tyne (1972) was the biggest selling album of that year and this in turn propelled the first album into the charts in the same way that Ziggy Stardust reactivated Hunky Dory for David Bowie in 1972. I first became aware of them with the mega hit Meet Me On The Corner, the opening track on the Fog On The Tyne album. There was something about the sound, the vocal blends, the folky guitars and the songwriting skills of principal songwriter Alan Hull. Their first album, although initially not charting at all, had some real standout tracks, the opener Lady Eleanor remains a classic and on re-release it reached No. 3 in the UK chart. Another piece of classic Hull songwriting is Winter Song. There’s something quintessentially English about them perhaps even quintessentially from the North East like The Unthanks. They are a cross between Fairport Convention, Fotheringay and Bob Dylan – and themselves, lovely meaningful songs. Towards the end of the album they do a Woody Guthrie song, Jackhammer Blues, and you can hear from this uptempo track that with this and their thoughtful other songs, that they were popular live.

Dare and I used to sing Meet Me On The Corner, great harmonies, great beat, great melody, great words, great song, but not written by Alan Hull, written by Rod Clements (bass, guitars, violin and vocals). The song had mandolin and harmonica player Ray Jackson on lead vocals you may remember Ray Jackson was credited on Rod Stewart’s Never A Dull Moment album as the mandolin player from Lindisfarne as Rod couldn’t remember his name despite him playing on the mega hit Maggie May. Although Fog On The Tyne was a big success and contained the memorable title track, the next album Dingly Dell (1972) saw tensions arise and cracks began to appear as the album received lukewarm reviews and didn’t do as well. Ultimately the band split into two different bands, Jack The Lad with Rod Clements, Simon Cowe and Ray Laidlaw with Alan Hull and Ray Jackson keeping the name. This version of Lindisfarne with a new lineup made two more albums, Roll On Ruby (1973) and Happy Daze (1974), but the spirit was gone and Alan Hull was also making solo albums, so in 1975 they broke up.

After this a lot happened, including more albums, successful reunion concerts and to this day the band with one original member (Rod Clements) continues to play. Alan Hull died in 1995, Simon Cowe died in 2015. You can read all about it here.

Song Of The Day is a rare performance of Lady Eleanor on Australian TV show GTK: