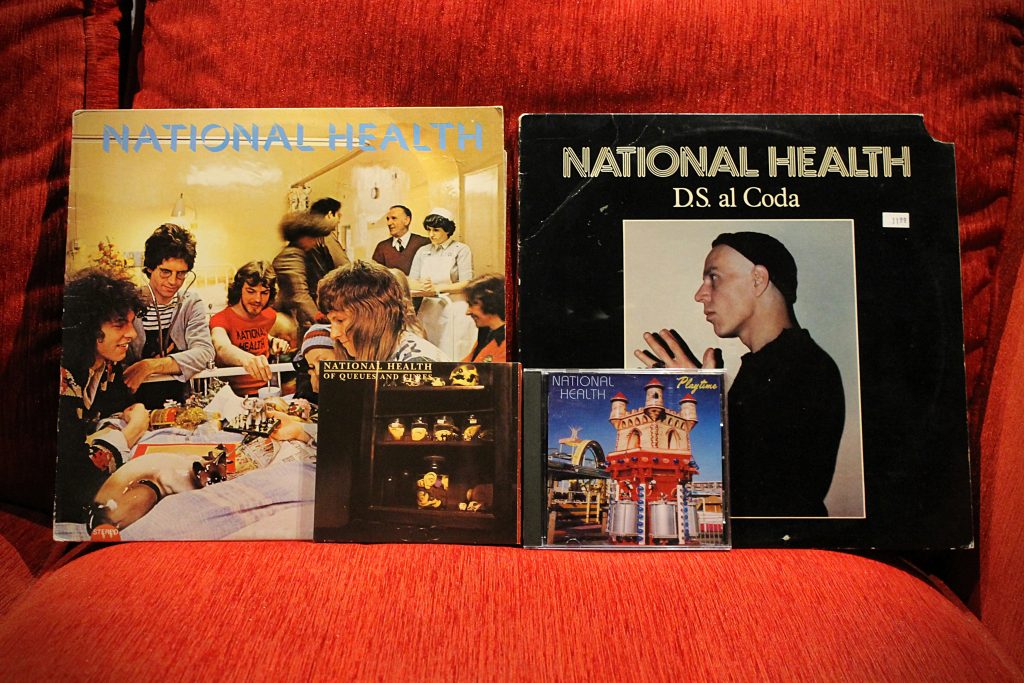 Music today had to continue in the direction of “the other Dave Stewart” because I like the journey so much. The continuation was inspired by the arrival of a vinyl reissue of Egg’s The Polite Force from Sweden, but before I get to the other Hatfield and the North albums I have (The Rotters Club and Afters) I felt like listening to his next project first. After he left Hatfield and the North he formed National Health with another keyboardist, Alan Gowen from Gilgamesh, that also included Hatfield and the North and Matching Mole guitarist Phil Miller. Initially, Bill Bruford played drums but Pip Pyle joined for the debut album. Thus, three Hatfield and the North members were back together in a band with a different name. Neil Murray joined on bass (Whitesnake anybody?) and Amanda Parsons sang the wordless vocals. They released their debut album of progressive instrumentals in the heart of the Punk Rock craze in 1977. It’s so good because they simply ignore the world around them continuing with their own special vision of what music is, exploratory, experimental, structured, erudite, eccentric, skilled, passionate, fashion-free nerdom.

The second album Of Queues And Cures (1978) replaces Neil Murray with Henry Cow legend John Greaves, Gowen is gone but there’s an array of guests. Musically it’s more of the same, instrumental jazzy, progressive, like an explorer meandering around a jungle and discovering exotic plants in the undergrowth. All the Progressive bands from the seventies do something that neo-prog just can’t do and I don’t know why. I think I blame technology and terrible lyricists, not like that’s an issue here, although one track has some vocals but the print on the CD is so small, I can’t read it.

Playtime, released in 2001, is live recordings from 1979. I just love how they continued on ignoring the musical climate but Stewart had gone complaining of the freer elements of the band instead favouring a more structured version. But then Alan Gowen returned and this new incarnation of the band with Greaves, Miller, Pyle and Gowen committed to European and then American shows. The first half of this album is recorded on April 27th at L’ouest De La Grosne, Bresse-Sur-Grosne, France and includes French guitarist Alain Eckert, the other half was recorded at The Main Point, Bryn Mawr, Pennsylvania in the USA on December 1st 1979 as a four-piece. It’s different without Stewart in the band, a different approach to the keys, but it’s the same madness that had them deliver this kind of thing in that period of time.

The last album D.S. al Coda (1982) is in tribute to Alan Gowen with the original band exclusively performing Gowen’s material. Some tracks had been recorded with Gilgamesh, others played with National Health and others rehearsed but unheard by the public. Gowen died on May 17th 1981 of leukaemia. He was just 34 years old.

Song Of The Day – National Health, “The Collapso” on The Old Grey Whistle Test 1979 from their then current album Of Queues And Cures. Phil Miller (guitar), Dave Stewart (keyboards), John Greaves (bass) and Pip Pyle (drums). The real rebellion by the real Punks.