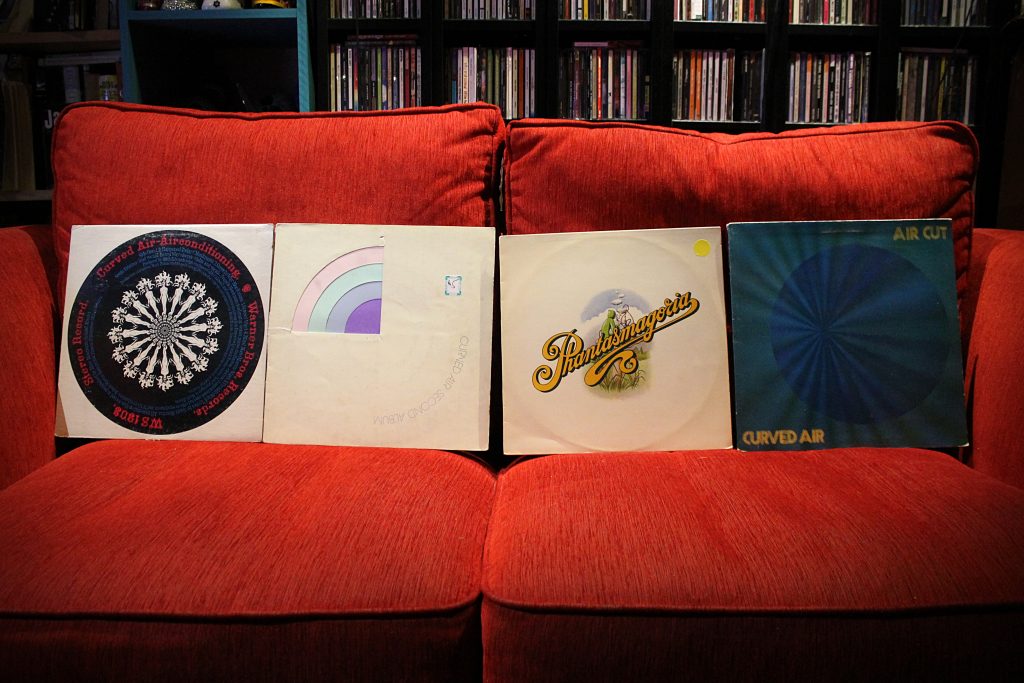 Music today is staying in the past until I find the time to file records away and investigate all the new records that have arrived. Lots of new releases which my friend Ed Rogers in New York is asking me about. I was explaining to Ed today I’ve been enjoying wandering through the shelves and listening to records I’ve had for years and heard lots of times. It’s easier to talk about records you know than ones you are listening to for the first time, you have to get to know them. So as I said to Ed, I could listen to one new album a night four times in a row. Maybe that is a good idea but for now, I’m playing records that I like and are new to a lot of people that read this blog, so that’s a good thing.

Today I didn’t follow up with Hatfield and the North’s other records, instead I felt like some Sonja Kristina and Curved Air. Their first album Air Conditioning was released in 1970 on Warner Brothers and was an adventure of Progressive Folk with a five-piece band that included Darryl Way on electric violin and Francis Monkman on keyboards and guitar, both were music college graduates. The band was augmented with Rob Martin on bass and the exotically named Florian Pilkington-Miksa on drums and with Sonja Kristina on vocals, they were bound for success.

They were innovative in their use of electronic sounds often coming from Darryl Way as he fed his violin into arrays of amplification and effects as heard on the track Vivaldi. But the album was varied and had lots of intriguing songs with titles like Screw and Stretch as well as the first single It Happened Today. It reached No. 8 on the British charts and was the first commercially available picture disc. They were named after the album A Rainbow In Curved Air released by minimalist and experimental electronic innovator Terry Riley in 1969 (Monkman had participated in the first UK performance of Riley’s previous album In C). Kristina had been in the musical Hair and the fortuitous coming together of the group’s members resulted in some excellent albums in the early seventies.

The second album called Second Album saw the departure of bassist Rob Martin replaced by Ian Eyre and followed the same path of catchy Progressive Folk with Kristina’s distinctive vocals and stage presence as well as electronic sounds coming from Way’s violin and Monkman’s keyboards. The album reached No. 11 in the UK chart and featured the hit single Back Street Luv that reached No. 4 in the singles chart. Cracks began to appear as the writing for the band split into the Way/Kristina camp on Side 1 and the Monkman camp on Side 2 with Ian Eyre co-writing the hit single and interestingly with Way not playing on it.

The first Curved Air album I ever bought was their third, Phantasmagoria, released in 1972. By this album, Ian Eyre had gone replaced by Mike Wedgwood on the bass. The album reached No. 20 in the UK charts and is one of my favourites of the era. More intriguing lyrical journeys, Marie Antoinette, Melinda (More Or Less) and that wonderful mixture of things – real songs with long instrumental passages. The idea that a real song doesn’t have to be just three minutes but also that virtuoso playing doesn’t justify itself with its skilfulness. Both the songs and the musical approach are essential elements. It’s always sad to see a creative band that struggles to execute their ideas or amazing musicians short on ideas. The use of the EMS 100 synth on Sonja Kristina’s voice on the track Whose Shoulder Are You Looking Over Anyway? breaks away from the format of songs and skills and finds a place for experimentation on the album.

But then it happened, Way, Monkman and Pilkington-Miksa left, leaving Kristina and newish bass player Wedgwood to assemble a new band for their next album Air Cut released in 1973. Kirby Gregory from Stretch (Why Did You Do It?) came in and shared guitars and bass with Wedgwood. Jim Russell joined on drums and Eddie Jobson on violin and keys. It was the last album before their original lineup’s (minus the various bass players) live reunion tour album. The lineup just made this one album. It starts off with a bang and a crash but I like it, especially as the song is called The Purple Speed Queen and seems to be about someone called Emily Jane. This album gets a bit of a bad rap but it’s not the straight-ahead Rock record I’ve heard talk about. The second track Elfin Boy is pure acoustic Folk beautifully sung by Kristina. The album is in fact quite varied, Eddie Jobson showing off his mad piano skills and as it’s 1973 and pre-Punk it has no fear of scope. Metamorphosis might have been a Siouxsie and the Banshees song if Kristina were ten years younger and Eddie Jobson had been locked out of the studio. I’m lucky, I like it all, as long as it’s good.

Note Monkman went on to join Sky, Jobson went on to join Roxy Music and UK and played with Zappa and Jethro Tull. Later on pre-Police Stewart Copeland joined the band, married Kristina and had kids. I saw them play live at Liverpool Stadium in the mid-seventies and fell in love with Sonja Kristina immediately.

Song Of The Day is Curved Air on Beat Club, Germany, performing Back Street Luv in 1971 with Barry De Souza sitting in on drums for Florian Pilkington-Miksa who had taken ill.