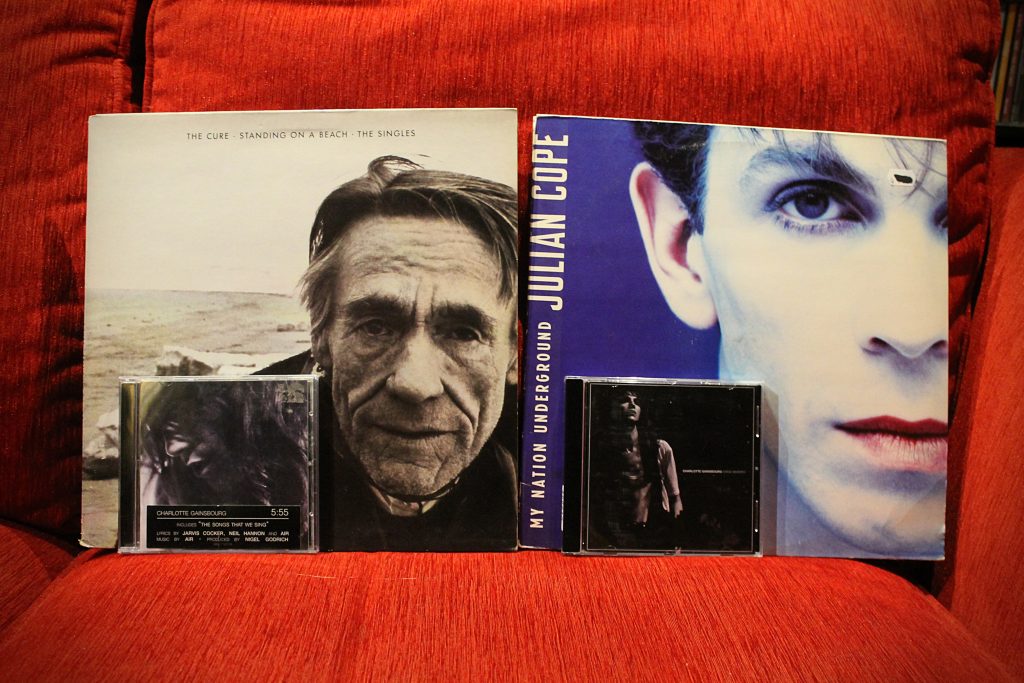 Music today had me listening to The Cure for the first time in a long long time. I always loved those early records (the words bands hate to hear). 10:15 Saturday Night was the one for me, I loved that song and that drum part. But also Killing An Arab because I’d read Camus’s The Stranger and overall the atmosphere that they created was so enticing. So, tonight I played Standing On A Beach – The Singles (Staring At The Sea in some countries), although the vinyl version is short four songs including my favourite, 10:15 Saturday Night, also A Play For Today, Other Voices and A Night Like This. A Forest, Charlotte Sometimes, Primary and The Hanging Garden were all favourites. I cautiously lent an ear to what happened next – Let’s Go To Bed, The Walk, The Lovecats and The Caterpillar (the last 3 all standalone singles) where Robert Smith discovered he was a commercial cartoon character, the hair, the lipstick.

We were all doing it but he took it further. So it’s not a criticism, he found an image, quite different to the earlier days and it worked, the suburbs thought he was wacky and the rest of us could still hear that he was a great eccentric English songwriter with a unique voice. I still don’t think he gets enough credit despite the success. But The Lovecats, I really didn’t like that one. In Between Days and Close To You were also catchy as hell, commercially viable, who knew? But Faith and Pornography and later Disintegration were the great albums for me. Standing On A Beach has the singles from Three Imaginary Boys, 17 Seconds, Faith, Pornography, The Top and The Head On The Door but also the American compilation Boys Don’t Cry that included the other standalone singles Boys Don’t Cry and Jumping Someone Else’s Train. Great, a must-have, but get the CD with the four extra tracks.

Julian Cope’s My Nation Underground sat somewhere in the middle of his life realisation that commercial pursuit was not for him and these more clinically produced albums of the era 1984-1991 including the predecessor Saint Julian were more what he could be rather than what he wanted to be. A better grasp of his preferred comfort zone would be found on the albums Fried, Skellington and Droolian and perhaps on one of his best albums, Peggy Suicide, which seemed to incorporate eccentricity and reason, madness and an eye on the charts simultaneously.

Always a fan, this is not my favourite record by him but because it’s today it has the track Charlotte Anne and today is Charlotte’s day. His knowledge of music is legendary and the opening track, It’s A Five O’clock World, comes c/-sixties group The Vogues and has a momentary brush with Pet Clark’s I Know A Place. So you know a good artist when you can still like the album you might like the least. Apart from Charlotte Anne, the album also has the lovely China Doll, it might have been nice covered by Scott Walker or Robert Wyatt.

Actress/singer Charlotte Gainsbourg, the daughter of Serge and Jane Birkin, released her first album in 20 years, 5:55, in 2006. It included a cast of hip collaborators including Jarvis Cocker, ex Pulp, and Neil Hannon from The Divine Comedy writing most of the lyrics with Nicolas Godin and Jean-Benoît Dunckel of Air writing the music, it was produced by Nigel Godrich of Radiohead fame. It’s a strange whispery album with Gainsbourg’s quiet delivery somewhere between talking and singing softly floating above the music. The album was a huge success in France despite her singing mostly in English selling over 500,000 copies – wow that’s a dynasty. It’s a dreamy hushed indie album. The first single The Songs That We Sings stands out but the quality of her speaking voice similar to Jane and the mood similar to Serge makes it an evocative and engaging album.

Stage Whispers came in 2011 (IRM with Beck in 2009). Stage Whispers has eight studio songs and eleven live songs. It’s initially much more of an Electro Pop direction and is produced by Beck. There’s something unsubstantial about it. This seems to happen to albums that have their finger on the pulse of the day, minutes later they lose their importance. It might sound better in another 10 years when the time period it was recorded in is further away. But then it suddenly changes with White Telephone, less Electro more of a song with sounds rather than sounds with a song lurking in there somewhere. Anna has the same positives, but then we’re back with a duet with Charlie Fink from Noah And The Whale, it’s so hip it doesn’t need to be better. New Zealand hip dude Connan Mockasin wrote the next track, Out Of Touch. Last of the new songs is Memoir, again more organic. What a strange record. Then we are into the live tracks, you really have to say that if she wasn’t Charlotte Gainsbourg you wouldn’t care but the audience goes nuts, so what do I know? It’s ok but when your album has sold 500,000 copies in one country and you’re massively famous, the whole thing takes on a life of its own. A version of Just Like A Woman, I think I know what it is, she sings/performs like an actress.

SONGS OF THE DAZE