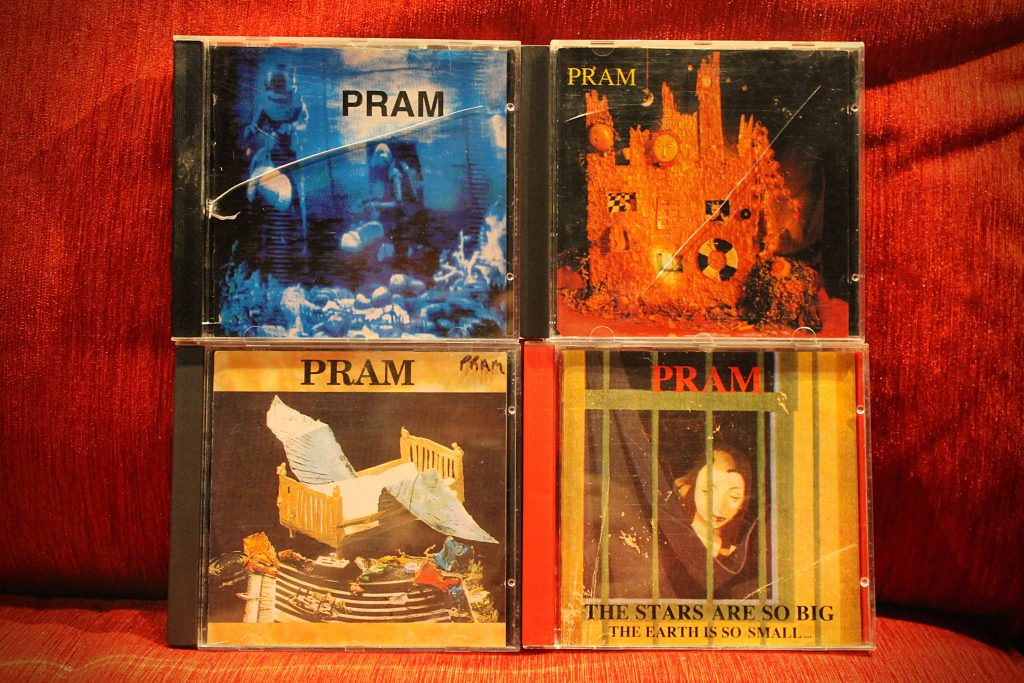 Music today comes from Pram, Birmingham’s CAN. I’ve been a fan of this band from the beginning and have lots of albums and EPs by them (not all of them, there’s so many). They released their debut 6 track EP Gash on their own Howl Records in 1992 but found interest in Too Pure Records who had already signed Stereolab, PJ Harvey and Mouse On Mars (I have so many records by these bands too).

They released the 4 track Iron Lung EP in 1993, a great collection of Krautrock rhythms and electronic sounds with eerie vocals. I just had to hear 1 minute of the opening track, the 6-minute Cumulus, and I was a fan. I suppose it could also have been the gherkin with legs parading as a baby on the back cover or the slightly mad lyrics or possibly the relentless rhythm and the odd instrumentation. The second track, Water Toy, was also intriguing, a CAN-like rhythm with odd background noises and eerie keyboards. Here are the lyrics:

The third track, Blue Singer, is noisy guitars with a Liebezeit influenced drum, angsty soft vocal and a buried background gurgling that gives the whole track the sense of people desperately trying to avoid all Rock clichés, Sonic Youth must have loved them.

Pram/Iron Lung is just great musical experimentation with ‘that’ beat coming in. The lyrics:

I’m a pregnant stick of chalk, my belly touches the floor
Dressed inside a parachute
Every morning I wake, I’m sick into a pan
Can’t get through the door anymore
I can’t dance and I can’t walk. I can’t dance and I’m alone
I just want to shed this weight, to feel free, afloat, a feather
She brought me a pram, patted my stomach and listened, said it was a monster
A big black hulk chariot, it stands in the hall
The cat’s already pissed in it

I won’t write out all the words but you get the idea. The last track, Iron Lung, is just keyboards and voice, a drone. At first, they might just seem noisy but they are just angular, scratchy and otherwise experimental, they have a special rhythm and an indistinct vocal that adds to the intrigue. There’s melody in there, there’s good playing too but instead of being a boring old Indie band, they press the ‘let’s keep it interesting’ button.

They even managed to keep it interesting with the title of their first long-player: The Stars Are So Big The Earth Is So Small…Stay As You Are, released in 1993. Once you are past the first two tracks, Loco and Radio Freak In A Storm (that is, if you don’t like that kind of noisy and/or obscure thing), you may have better luck with the third track Loredo Venus which sounds like it was recorded by runaway children in a secret studio at the end of an imaginary garden. Perhaps the secret of their sound is the instrumentation and the attitude, Rosie Cuckston on vocals and keyboards with Matt Eaton and Samantha Owen sharing bass, guitar and more keyboards, and then there’s Max Simpson with even more keyboards and samples and new drummer Daren Garratt (replacing Andy Weir who left after the first EP).

The songs are low key in as much as they appear before you out of a mist and disappear. If the songs were written under a table in a castle while the guests feasted, nobody would notice that they were there. It’s not exactly minimal either but it’s somehow mysterious, it’s full of ideas, ordinary is expelled to the rich diners. Milky is followed by Dorothy that make the B52’s sound like Bon Jovi as it descends into a swirling pit of insane orphans, stirring oversized cauldrons of hair and bats. But then comes In Dreams You Too Can Fly which lasts for a glorious 16 minutes and includes an additional musician called The Mysterious Verdigris Horn who appears throughout the track that glides through the ruined buildings, looking down from above and documents the reality of being earthbound from sleep. It sounds like Soft Machine if they were all 7. Rosie starts singing around 8 minutes and then returns to the sandpit for the remaining 6 minutes.

The Ray sounds like it was recorded inside a long metal tube with Rosie at one end and the machine that takes your soul when you die at the other. The last track Cape St Vincent sounds like the toy box was just given consciousness. Experimental music like this might be hard going for some but you have to approach as you would approach any situation that you might not have experienced before – with interest. Hearing something different always pricks my ears up before something familiar.

In 1994 they released the Meshes EP, the opening track was Life In The Clouds which sounded like a strange madwoman had been found in the grounds but when they approached her – it was mother. In mother’s head was a beat that on recognition was immediately transferred to the children’s brains and they all began to dance, beckoning the gardener, the gamekeeper, the cook and the chambermaids to join them. Followed by Chrysalis which is what they all turned into as the dusk approached. This track was definitely composed in space and as the pods rose through the clouds you could see the stately home, the turrets and all its grounds and gardens designed by Capability Brown, fade back to Earth.

The last track, Legendary Band Of Venus, was the planet they were destined to reach wearing ultramarine and lavender suits, their eyelashes seared by the brightest points of the stars.

On Helium, their second full-length album released in 1994, they found themselves back in the insane asylum that they’d never left. A mixture of electronics, nineties style, real drum rhythms and space-age lounge music, it’s a lunatic’s vision of a future that never was. Rosie’s disquieting vocals have grown in confidence, like an assured ghost. The songs seem to be impeccably arranged, an organised chaos. Songs rise and fall, stop and start there’s evolution on their planet. It’s almost as if they’d been sent a new machine that did things that they couldn’t do before. Nightwatch has them trying different things (as if they hadn’t tried different things before, haha). It’s somehow cleverer and I like the way they put their rhythms and sounds together in the same way Holger Czukay did on his fantastic solo albums. Things Left On The Pavement has a repeating tom pattern and sounds African. It’s Afrobeat from Birmingham and one wonders if these experimental Indie kids know they’re doing it.

Windy wanders through the musical possibilities of the boxes they have recently purchased. My Father The Clown has the lunatic circus in town as they continue to look into instruments that you can’t easily name. Dark turns erupt in the middle of the song as if blackness had arrived greying out the primary colours like a descending beast. The Blue is somehow breezy with the Verdigris Horn that sounds like he sometimes doesn’t know what key he is in and does that old trick of repeating the line so people think you meant it. The sample man is in there listening to Bossa Nova chords rewritten for men that live in tunnels. There’s the underlying skill of the drummer that gives everyone else total freedom.

Little Angel, Little Monkey might drive you mad with the repeating woodwind. “And when you leave me terror darkens my mind like crows wings”. It’s something like an upbeat Residents in a tangle with guitars and keyboards and safe drum patterns that make sense despite the impossible sounds around them which they all willingly agree to.

Meshes In The Afternoon is an experiment in sound and the last track Shadows takes you to a sermon at the church of the unusual. Angels dressed as soldiers wander through the pews looking for answers. Staring into people’s eyes, removing their watches and putting them on other people’s wrists, suspending themselves from the rafters and casting down tunes and organ chords for the day’s hymn. No one can read the words, no one can spell out the solutions, all they can do is close their eyes, dim the lights and lie prostrate with hope.

Song Of The Day is Shimmer And Disappear from Across The Meridian (2018), Pram’s latest release. Rosie is gone but their ideas are still intact all these years later.