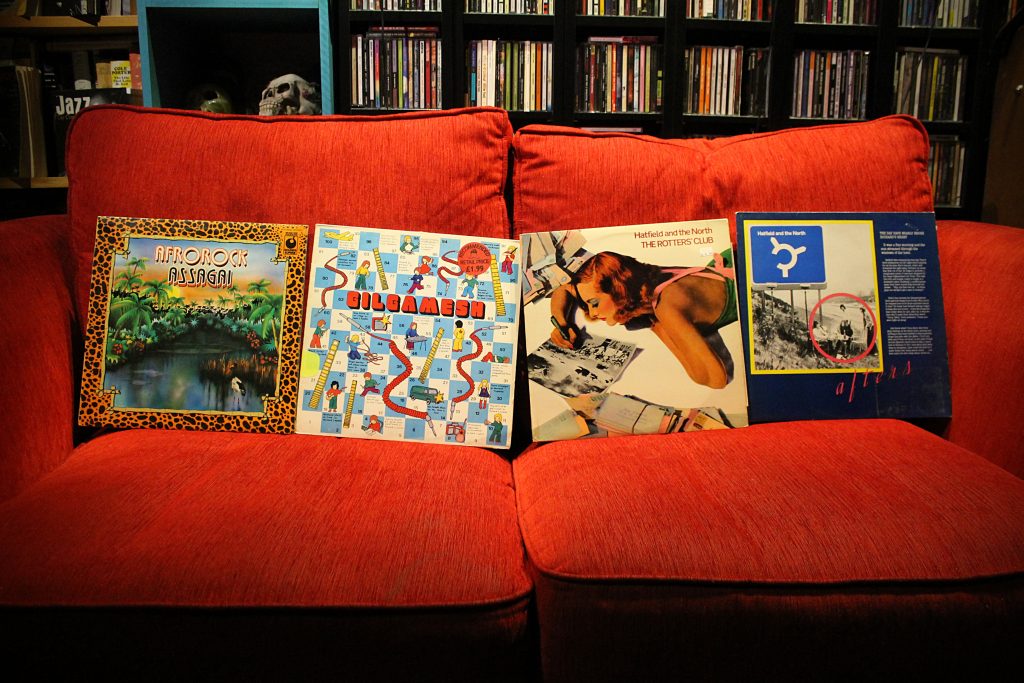 Music today has me investigating Assagai, after Osibisa they were the only other known Afro-Rock band in the seventies – in England anyway. They made two albums in 1971, self-titled and Zimbabwe both on Vertigo. I have a Music For Pleasure (cheap label) reissue which is actually Zimbabwe renamed Afrorock and without the original Roger Dean cover. It was either a copyright issue or someone at the label’s bright idea. Lots of drums and horns, the original band had three members from South Africa, drummer Louis Moholo, trumpeter/flautist Mongezi Feza and alto saxophonist Dudu Pukwana, and two members from Nigeria, tenor saxophonist Bizo Mngqikana, and guitarist/bassist Fred Coker who eventually left to join, you guessed it, Osibisa. Keyboardist Alan Gowen from Gilgamesh and National Health was briefly in the band as was Jamie Muir who played percussion with King Crimson.

This led me to Alan Gowen’s band Gilgamesh and the first self-titled album released on Virgin’s other label Caroline in 1975. It’s Progressive Jazz Fusion with Phil Lee on guitars, Jeff Clyne on bass, Michael Travis on drums and Amanda Parsons on occasional voice. I won’t actually be going mad tonight and writing a tome about obscure bands after a long day and also because this is mainly territory that I’ve already explored and explained and if you like this kind of thing, then you’ll love this. They made two albums of which I just have the first. In between the two albums Gowen had joined Dave Stewart in National Health but returned for Another Fine Tune You’ve Got Me Into (1977). A rarities record, Arriving Twice, was released in 2000.

Hatfield and the North’s second album The Rotters’ Club released in 1975 is a classic in the genre. The usual suspects are involved, Dave Stewart on the keyboards, Phil Miller on guitar, Richard Sinclair on bass and vocals and Pip Pyle on the drums. Guests include Mont Campbell from Egg on french horn, Lindsay Cooper from Henry Cow on bassoon, Tim Hodgkinson from Henry Cow on clarinet, Jimmy Hastings on sax (Pye Hastings from Caravan’s brother), and The Northettes, Barbara Gaskin, Amanda Parsons and Ann Rosenthal on backing vocals. This music will either be totally uninteresting to you or completely blow your mind, the choice is yours.

Virgin Records released Afters in 1980, a compilation of tracks from the debut album and The Rotters’ Club and including the 1974 single Let’s Eat (Real Soon) and B-side Fitter Stoke Has A Bath, a different version than The Rotters’ Club version. There’s also two live tracks, the 2-minute Oh Len’s Nature! recorded in Lyon and Toulouse and edited together (the wonders of seventies technology). The other live track, Halfway Between Heaven And Earth, was recorded at the Rainbow Theatre in London in 1976.

Song Of The Day is in fact a short documentary about the Canterbury Scene: