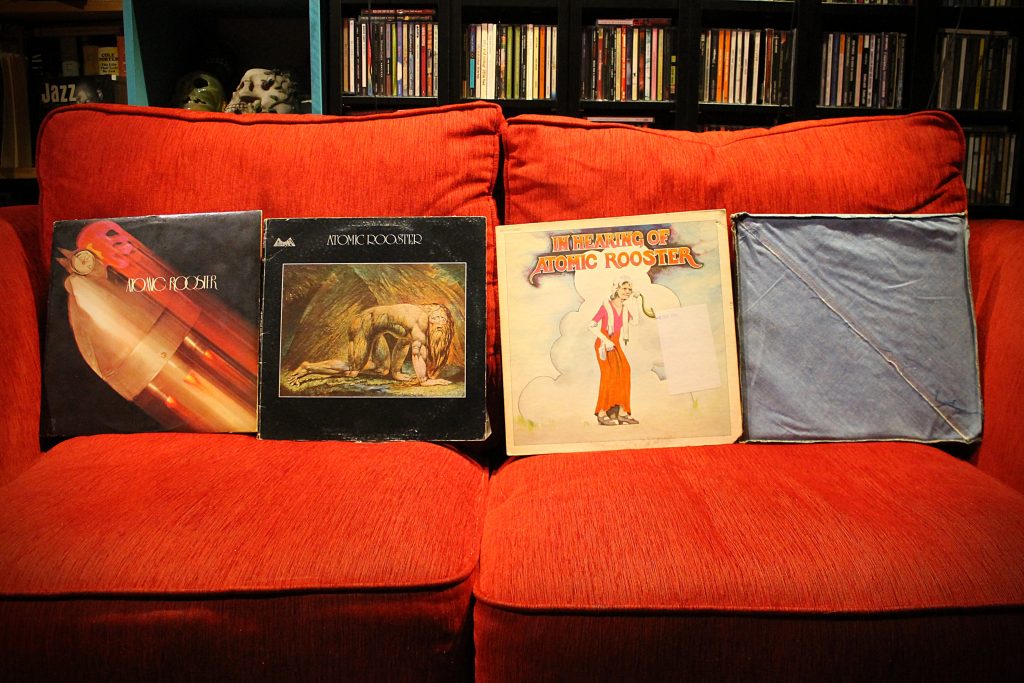 Music today was another forgotten classic band from the seventies, Atomic Rooster, formed by ex Crazy World Of Arthur Brown members Vincent Crane on keys (Crane co-wrote Fire) with Carl Palmer on drums, and Nick Graham on bass and lead vocal, with John Cann on guitar and oddly lead vocals on the US release of their debut album. Apparently Nick Graham left, so John Cann re-sung the vocals for the US release but the US release didn’t happen, so the second pressing of the original album had different vocals but it wasn’t declared on the sleeve. And guess what? This record seems to have gone missing in my record collection. You could lose an ox in here, hopefully, it will turn up.

This music lives somewhere between sixties and seventies Rock and Progressive, a crossover period which is just what I like about it, one foot in the glorious past and one foot in the glorious future. Lots of organ solos and instrumental sections but lots of songs too. It was Carl Palmer’s only album with Atomic Rooster before he left to form Emerson, Lake And Palmer.

The first album I ever heard by Atomic Rooster was Death Walks Behind You (both the US and UK cover included in the pics because I can’t find the first album). I always loved the UK cover art and the melodic riff of the first and title track, plus you can hear the long hair. With the departure of Carl Palmer and Nick Graham, the band decided to only replace the drummer and enlisted Paul Hammond into the fold with John Cann handling the bass and the guitars. This album included a hit, Tomorrow Night, written by Crane and released in January 1971 and reaching No. 11 on the UK chart. It was followed by a bigger hit, Devil’s Answer, written by Cann, a UK No. 4 and released as an independent single between albums, but beware, there’s different versions and some suck, the original UK single release is the ONLY one. If you are on Spotify, the best version is on the Heavy Soul album. Death Walks Behind You and the first album were both released in 1970.

In Hearing Of was released in 1971 and the band again went through a transition period where Cann and Hammond were gone but still played on the album with Leafhound singer Peter French taking over on vocals and with Steve Bolton on guitar and Ric Parnell on the drums on the album tour. One imagines that bass was handled by Crane on the keyboards live. It’s getting into some pretty standard Rock territory now, the seventies have arrived. I sometimes think that I’m not listening to songs, I’m listening to the seventies not for nostalgic reasons but because I like the sound of the period, the warmth of the instruments, how the drums don’t dominate and sound like, well, drums.

In 1972 they released Made In England that came in a sleeve made of denim. Singer Peter French was gone and sixties singer Chris Farlowe was in. Farlowe was most famous for taking Jagger/Richards’ Out Of Time to No. 1 in 1966. He was a proper singer and the Progressive and the Rock side of Atomic Rooster suddenly had another influence, Soul, but although it doesn’t sound like a good match the opening track Time Take My Life is pretty great. The second track is where it all goes wrong, empty Soul Funk. So you need patience for these albums because a great track will be followed by a not so great track but the good ones are worth it.

After Atomic Rooster, Cann (now John Du Cann) and Hammond formed Hard Stuff and later they found themselves in a short-lived Atomic Rooster reunion. Hammond died of an accidental drug overdose in 1992, he was 39. Du Cann died of a heart attack in 2011 aged 65. Vincent Crane committed suicide in 1989, he was just 45 years old.

Song Of The Day – Atomic Rooster on Top Of The Pops in 1971 with Devil’s Answer and Tomorrow Night. Love those dancers.