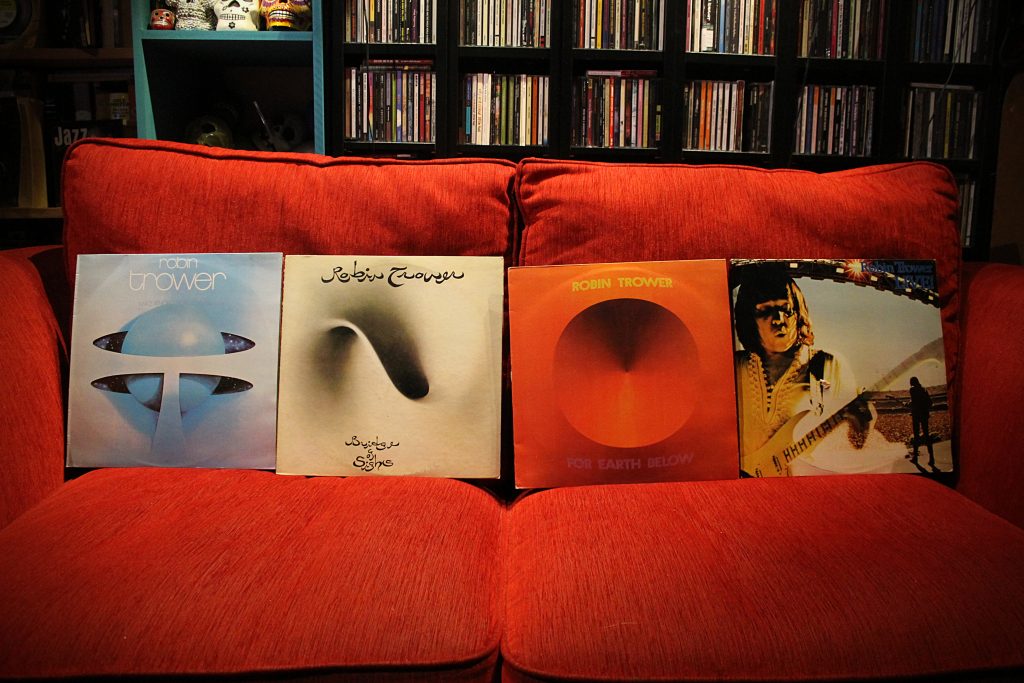 Music today has been the opposite of yesterday, of course it has. Although I do binge listen, I crave different takes on the musical climate. Even if something different doesn’t make me as happy as something else, I need distance to my favourites and I need to hear other worlds. For example today I was reading about a 20-year-old Rap girl called Flo Milli. I watched 4 videos, yikes, what a different world. The music I chose today wasn’t in response to that, I’ve been meaning to listen to some seventies guitarist music for a while and Robin Trower is always a delight. When Robin Trower reinvented himself as a guitar hero it was shocking to everyone. No one really had any idea based on his work with Procol Harum (1967-71), sure you could hear that he was a ‘seventies’ guitarist but this was Hendrix land. I always thought that he was compared to Hendrix unfairly, it’s like comparing a Jensen to a Porsche (sorry, someone will understand).

He formed a band called Jude with the gravel-voiced Frankie Miller, ex Tull drummer Clive Bunker and James Dewar but they didn’t record and soon broke up. He released his first album Twice Removed From Yesterday in 1973 and it was an outstanding debut – if you like guitars. What a great tone he had and it wasn’t just all about him, he framed his sound into a three-piece band with the talented James Dewar on bass and vocals and Reg Isidore on drums. Dewar had been in Stone The Crows and was a proper British Blues Rock singer like Paul Rogers from Free. So it wasn’t just all about the guitar (incidentally, both Dewar and Isidore died of strokes at the age of 59). The album made little impression on the US chart reaching No. 106 and made no impression at all in the UK. It’s that same old story, you have to be popular to be popular and Trower had to build his reputation before he started having any success and that would come in the US with the release of his second album.

Bridge Of Sighs was released in 1974 and like the first album was produced by ex Procol Harum bandmate Matthew Fisher with Beatles engineer Geoff Emerick twiddling the knobs. Again, the album made no impression on the UK chart but in America, it reached the Top Ten (No. 7) and went gold. It’s a great guitar-heavy Blues Rock album. The opening track Day Of The Eagle sets the tone and with all of Trower’s songs fast or slow the guitar playing is so expressive. Apparently Robert Fripp was so impressed with how he bent strings that he got lessons. A guitarist lives or dies by his ability to express himself with the instrument and it doesn’t matter if you are Johnny Ramone or Eddie Van Halen it is essential that your personality comes through. It starts in your heart, travels to your head and reveals itself in your fingers. Trower was brilliant at this.

He released For Earth Below in 1975 with new drummer Bill Lordan. After three sixties bands, The Amazers, The Esquires, and The Mystics, Lordan joined Gypsy, a band from Minnesota, for three albums (I have one album by them, In The Garden, 1971). He played on Sly And The Family Stone’s album Small Talk in 1974 and later that year joined Robin Trower after Reg Isidore had left the band. It was around this time that I saw this lineup live at Liverpool Stadium. I remember it was sold out, I guess Britain had finally woken up to Trower’s prowess. The album reached No. 26 in the UK and No. 5 in the US, like the previous two albums picking up a gold disc. Trower was playing some classic Wah-Wah solos live and on this album especially on Confessin’ Midnight which certainly had hints of the ghost of Hendrix.

In the same year, Trower released a live album recorded in Stockholm, apparently they didn’t know they were being recorded and consequently played one of their best shows and captured it on tape. It featured seven tracks from the first three albums and is only 41 minutes long and one wonders if this was the whole concert and if not, where’s the rest of it? There’s lots of great live solos and these elongated tracks are pure delight for guitar fans. Listen to Daydream, no really, listen to Daydream. If you are into words, this album is not for you.

This is just four albums, there are so many more and his latest album Coming Closer To The Day (2019) is a great return to form. Then there’s the albums with Jack Bruce. We need to live forever.

Song Of The Day is Robin Trower live at the University Of London in 1980 coaxing Daydream out of his guitar, originally from Twice Removed From Yesterday, released in 1973.