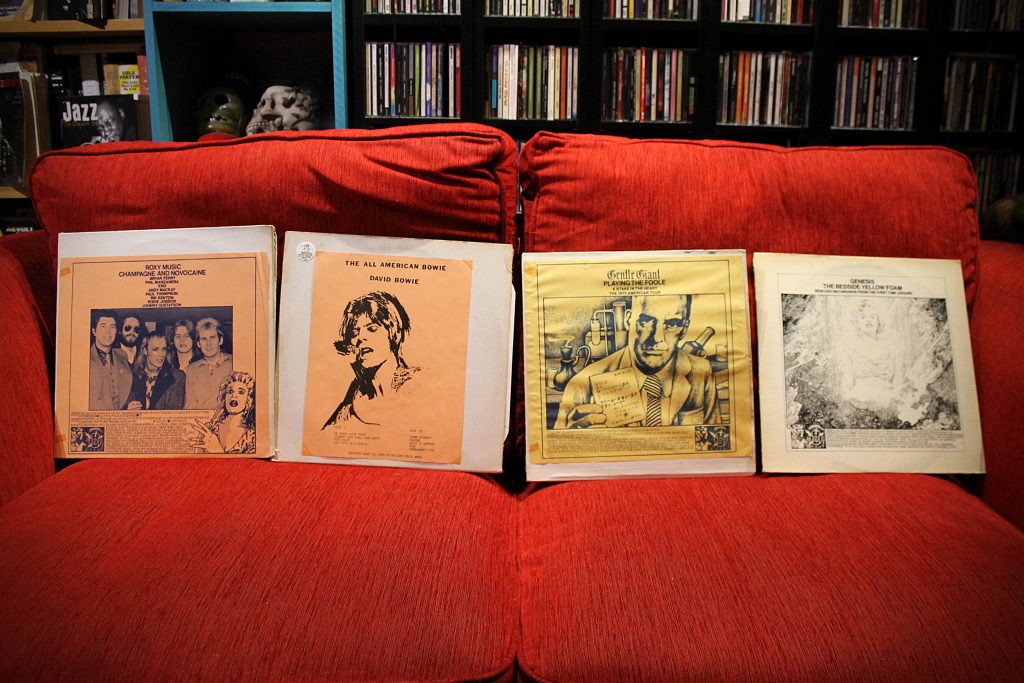 Music today has gone to bootleg land and I was playing a couple of bootleg CDs yesterday as I was talking about bootlegs in the blog. So I started today with Champagne and Novocaine (1975), unreleased by Roxy Music. It’s sonically a little lacking at first, but you get used to it and it’s an example of what I was talking about when I said that the bootleg gives you something of that band that an official release wouldn’t. What is that exactly? Well, it’s unrestrained for a start. The first two tracks are The Bogus Man from For Your Pleasure and Sea Breezes from the debut. Then a fantastic slower version of Virginia Plain followed by a studio version of the B-side, The Numberer. These tracks are worth their weight in gold for Eno’s brilliant insane noisy synth solos and Andy Mackay’s oboe. Then there’s Ferry’s voice, the band, just everything. Then there’s the audience, sometimes it sounds edited in but at other times it sounds like they are all sitting there quietly listening to this amazing music, there’s a silence before the clapping starts. After The Numberer comes a studio version of Pyjamarama, I guess they’re outtakes, although Pyjamarama sounds very like the single, maybe they put it on there to have the two hit singles on the album as a selling point.

Side 2 opens with Editions Of You (from the debut), an introduction, “And now Roxy Music”. You can hear the sound man finding the vocal level in the live mix. I suppose this is a different version of the band to Side 1 with perhaps Rik Kenton on bass on Side 1 and John Gustafson on bass on Side 2. Next track is A Song For Europe from Stranded and at this point, it’s Eddie Jobson on keyboards (Eno left after For Your Pleasure). It’s not as mad without Eno, although it’s still a fascinating live document of Roxy Music as Art-Rock in the glammy mid-seventies. Next comes the weird Chance Meeting (from For Your Pleasure) and it seems like it’s Eno again conjuring up some strangeness. Ferry’s voice sounds like he’s singing from the deck of the Titanic in 1912 as the iceberg looms. Manzanera manages controlled effective feedback and Eno adds noises. The audience waits in silence till the very end before they clap, you can feel the anticipation. Last track Re Make/Re Model, the opening track from the debut album, lots of mad Eno sounds and Manzanera solos and Mackay saxophone. It’s great, an exciting record that they would never have released, luckily the bootleggers were there to capture some very special moments.

The All American David Bowie was recorded at March 10th at Long Beach Arena in 1973. It’s not the best quality but the first track is My Death, credited as My Death Waits There, so obviously not bootlegged by a fan but it’s wonderful to hear Bowie singing this in that era, alone with just an acoustic guitar. You really know it’s not made by a fan when they spell Aladdin Sane incorrectly but the version despite being sonically challenging starts with a groove and an amazing Mike Garson improvisation on the piano. This recording is one month before the release on the Aladdin Sane album, so to the audience, this is a song they’ve never heard. In the middle, he starts singing (On Broadway), then it fades into Five Years from Ziggy Stardust and you hear the crowd cheer. Next comes The Width Of A Circle from The Man Who Sold The World and it’s so great to hear Mick Ronson going nuts for the solo, again things you never hear on the ‘controlled’ live records. No overdubs on this baby, Ronson has been unleashed and one wonders if there is a better quality version of this concert or if these days they could recover a better sound through modern technology and tinkering.

Side 2 opens with Ziggy Stardust, I wonder if this was recorded on a cassette in the crowd. It doesn’t sound like a mixing desk tape. Next comes Changes from Hunky Dory, the album that suddenly ran up the charts in the UK on the coattails of Ziggy Stardust. I’m not sure if that happened in America. For some reason, the backing singers, whoever they are, are singing the wrong melody. Bowie on sax. Then comes Panic in Detroit and Time, again tracks the audience wouldn’t know as they’re from the unreleased Aladdin Sane. The concert finishes with a rousing version of Suffragette City and you are left with some frustration at the quality of the recording (this one you don’t really get used to) and some frustration that you weren’t there.

There seem to be quite a few Gentle Giant bootlegs, I have about 5 from various tours and TV shows. This CD is from Santa Monica in 1975 and the Electric Ballroom in Dallas, Texas, March 1977 (two short excerpts). It opens with a slightly dodgy sound on Cogs In Cogs but soon recovers on this track and the next one, Proclamation. By the third track, Funny Ways, the tracklisting on the sleeve has gone awry. You may have a little more sympathy for bootleggers if they attempted to be accurate and recognised the band’s songs – Funny Ways is not mentioned on the sleeve. I just noticed that this unofficial live record is on Spotify…does that mean the band have approved it? Hm. There is a story about the only vinyl Gentle Giant live in America bootleg called Playing The Foole – it’s not live and not recorded in America but because it was so popular the band used the title for their own official live album release (omitting the ‘e’). So I have this bootleg and can’t quite figure out what it is. It sounds like a studio recording except there’s somehow more reverb on the vocals. Does anybody know? 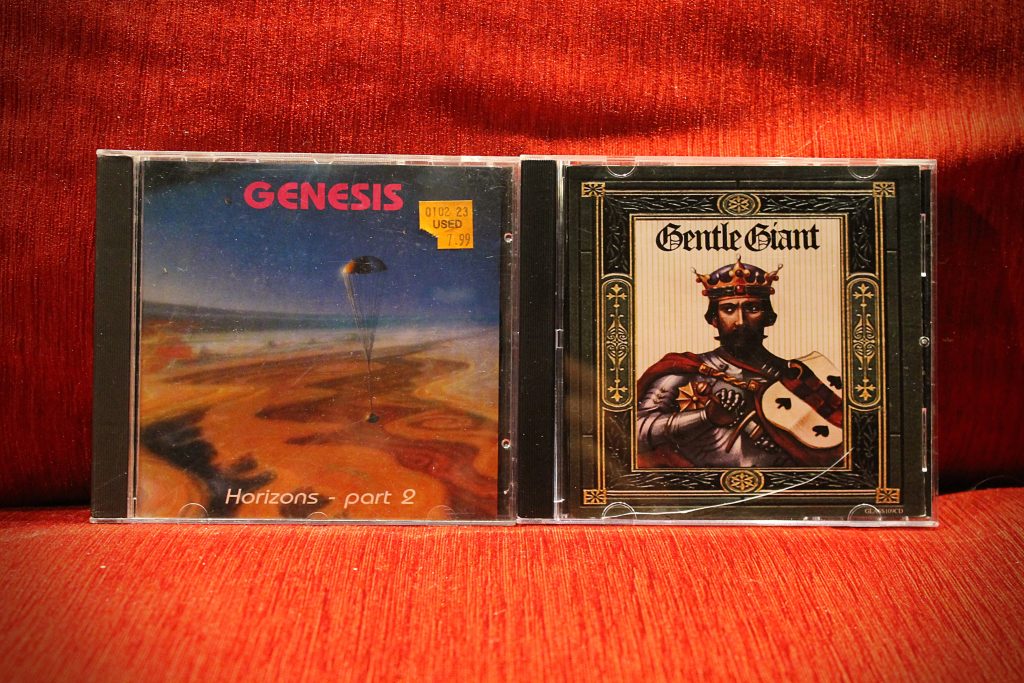 The Genesis album The Bedside Yellow Foam has Side 1 recorded in England and Side 2 recorded in Canada both in 1974. It starts with a Peter Gabriel monologue before a cool version of Dancing ‘Out’ With The Moonlit Knight. After hearing a lot of bootlegs tonight, I must admit I’m looking forward to hearing a great album of better quality but as a fan, it’s exciting to hear your favourite songs played slightly differently, with a different energy, a sense of abandon and with all the benefits and pitfalls of a live performance. Cinema Show, Aisle Of Plenty and Supper’s Ready on Side 2, it’s lovely lyrical and melodic music despite its shortcomings and we experience something great about the band that doesn’t reveal itself on official releases.

Song Of The Day is Genesis live on Belgian TV in 1972: