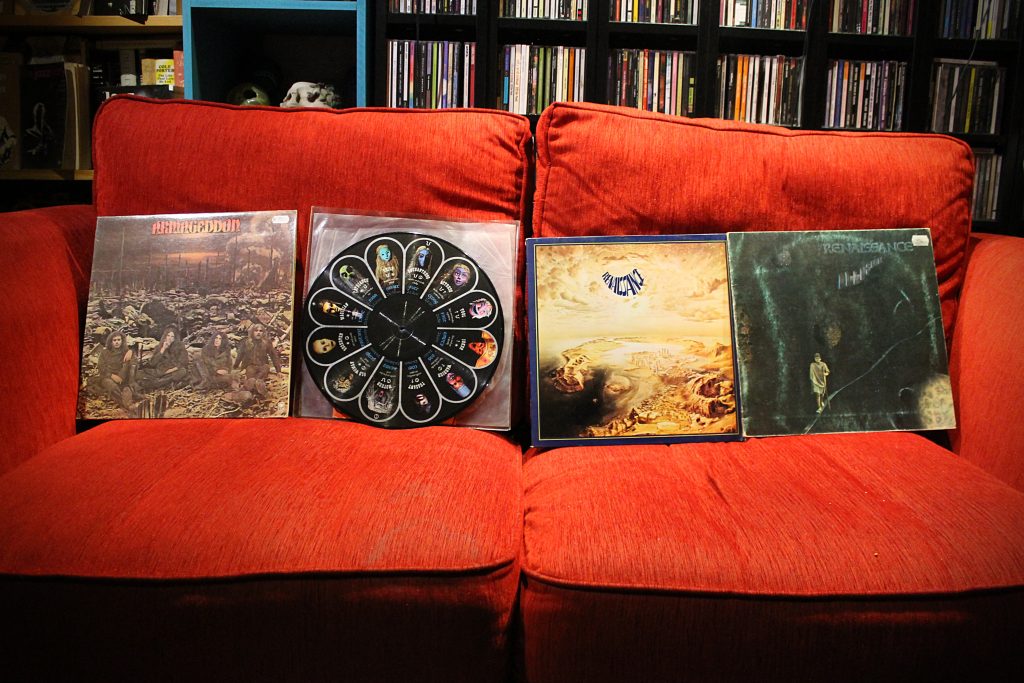 Music today comes from Armageddon and their one and only album released on A&M records in 1974. It was something of a supergroup with Keith Relf from The Yardbirds and the first incarnation of Renaissance on lead vocal. Relf was involved with production on Steamhammer’s final album Speech (1972) and that led to Armageddon being formed. The band was Martin Pugh from Steamhammer on guitars and Louis Cennamo from Steamhammer and Renaissance on bass with Bobby Caldwell from Captain Beyond and Johnny Winter on drums. It was something of a seventies Rock album, pre-Punk and post-sixties, not Progressive and despite critical acclaim, the band failed to support it with a tour and they disappeared rather quickly. Relf returned to England and died soon after, he was electrocuted whilst playing his guitar at home. If the riffing Rock band isn’t for you do at least listen to the jangling arpeggios of Silver Tightrope, the album is worth having for just this track.

After Relf left The Yardbirds he produced the obscure Progressive Folk-Rock band Saturnalia who released one of the first picture discs, Magical Love, in 1973. It’s a must-have for all record collectors of sixties and seventies records in this genre. It’s a little more Rock than Steeleye Span, less traditional. It’s another one of those bands that haven’t realised that the sixties has gone and haven’t quite become acclimatized to the realities of the seventies. They have male and female vocals and lots of potential to succeed but, well, they didn’t. The lineup is Aletta on lead vocals, Adrian Hawkins on lead vocals, Rod Roach on lead guitar, Richard Houghton on bass and keyboards and Tom Compton on drums. Roach and Hawkins had been in Horse (I have their record, I bought it for 10p in a charity store, it goes for £500 in very good to mint condition). If Saturnalia had stayed together there might have been a place for them on the British Folk-Rock scene but it wasn’t to be. There was the coup of having Relf produce them, the amazing picture disc, their flowery name and a style that had a following in the seventies. Perhaps they were a little lacking in the songwriting department but they were getting there and the future might have been rosy. The album came in a clear sleeve with a booklet, hard to find but I have it and a concert ticket, hard to find and I don’t have it. On the picture disc, all members are naked on the torso including Aletta. The pressings are early technology for picture discs so there’s some sound quality issues. Last but not least there’s a doubt as to when it was released, Wikipedia says 1969, Discogs 1973, I’m going with 1973 even though you can hear some Grace Slick sixties style in there.

Relf’s involvement might have been a precursor for his next band, Renaissance, with sister Jane on co-lead vocals, another ex Yardbird, Jim McCarty, on drums, Louis Cennamo on bass and John Hawken on keyboards. Or, if Saturnalia was released in 1969, that’s where he got the idea for the next band. The self-titled debut was released in 1969 and it was a bold Progressive affair. The first track, Kings And Queens, is 11 minutes long, the second, Innocence, 7 minutes long and Side 2 only has 3 tracks. It’s gone a long way from the Yardbirds in a very short period of time. It’s produced by ex Yardbirds bassist Paul Samwell-Smith who famously produced Cat Stevens’ successful records and another band called All About Eve.

They made one more album, Illusion (1971), before falling apart. The album was only released in Germany at the time and didn’t get a UK release till 1976. It’s an odd album which somehow sounds more sixties than the first album, its oddness is why I like it, it sounds like nobody quite knows what they are doing, as if they are waiting for somebody to come in and tell them what to do. That’s pretty much what happened as manager Miles Copeland got involved and began the rearrangement of the band – it’s complicated and they ended up being one of those bands that went on to have success with no original members. The single Northern Lights reaching No. 10 in the UK charts in 1978 – as a concert band, they grew to be very popular.

A rare video clip of Renaissance performing at the underground Olympia Pop Festival (666 – 6 bands for 6 hours for 6 days) in Paris in early January 1970: