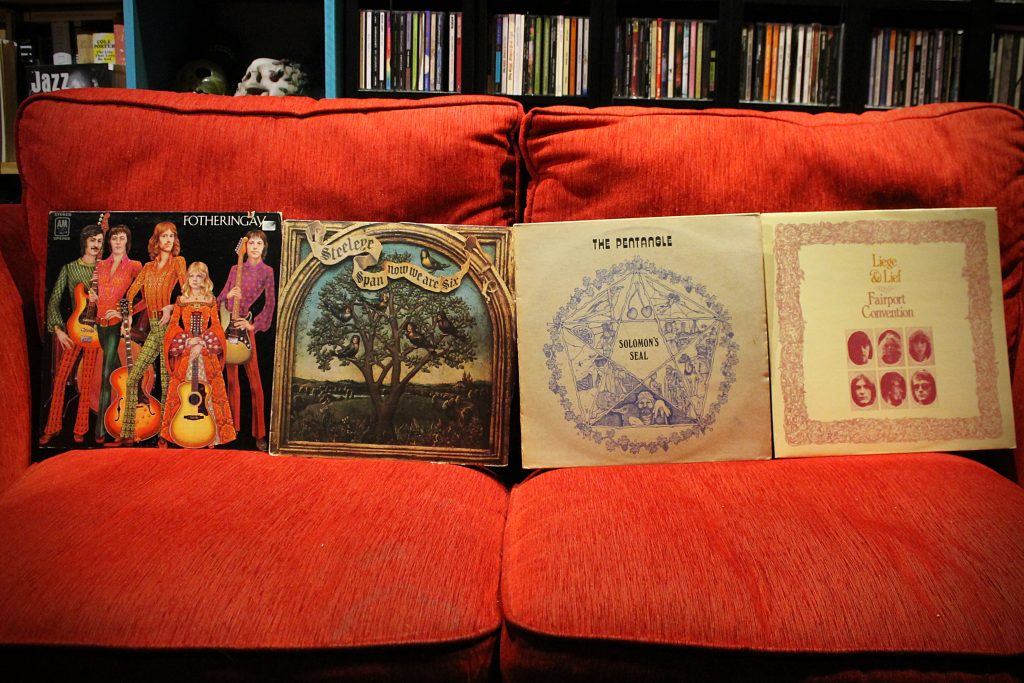 Music today has been loosely sea-themed (not really) with the wonderful Fotheringay album (1970), the only one they released in the period. It has a track called The Sea, it seemed an appropriate place to start. Sandy Denny had decided to leave Fairport Convention and form her own band with Trevor Lucas on vocals and guitar, Pat Donaldson on bass, Jerry Donahue on guitar and Gerry Conway on drums. The results were exceptional and it’s one of my favourite albums in the genre of Folk-Rock, especially The Sea…

Do I ever wonder? You don’t know.
You’ll never follow, and I’ll never show.
D’you see the water and watch it flow
And float an empty shell,
And you think that I’m hiding from the island.
You’ve a fault in your senses. Can you feel it now?
Time? What is that? I’ve no time to care.
I’ve lived for a long while nearly everywhere.
You will be taken, everyone, you ladies and you gentlemen.
Fall and listen with your ears upon the paving stone.
Is that what you hear? The coming of the sea?
Sea flows under your doors in London town.
And all your defences are all broken down.
You laugh at me on funny days, but mine’s the slight of hand.
Don’t you know I am a joker, a deceiver?
And I’m waiting for the land.

It’s an album that shares a song with Trevor Lucas (The Ballad Of Ned Kelly), Dylan (Too Much Of Nothing) and Gordon Lightfoot (The Way I Feel). Peace In The End is sung by Denny and Lucas together and a co-write, Banks Of The Nile, is traditional and arranged by the pair with four Sandy Denny classics, Nothing More, Winter Winds, The Pond And The Stream and of course The Sea. It’s one of the great Folk-Rock albums, a must-have – order it now. There is also a live in Essen album from 1970 and a Fotheringay 2 released by surviving members finishing the started 2nd album. There’s a box set of everything available called Nothing More.

Fotheringay only made one album as there was pressure for Denny to go solo due to her popularity, which she did, releasing four albums before her untimely death on the 21st April 1978 at the age of 31. Lucas died on the 4th February 1989 at the age of 45.

One of the issues about these album recommendations and the fact that I may choose one album by a band or at the most 4 albums by one band in a night is that a band like Steeleye Span have released 23 studio albums, 11 live albums and 3 box sets, then there’s compilations! So, I chose Now We Are Six, their sixth album released in 1974, it reached No. 13 on the chart. It was also called Now We Are Six because they were usually a five-piece, the title taken from A.A. Milne’s poems for children (Winnie The Pooh author). The band had brought in a permanent drummer in Nigel Pegrum (amongst other instruments) from Gnidrolog. The band was now Maddy Prior on vocals with Tim Hart, Peter Knight, Bob Johnson and Rick Kemp on lots of different instruments and vocals. The album is a mixed bag, with standout tracks but you have to be careful which version of the album you get. The Australian album has a different order and my favourite track Thomas The Rhymer is cut from 6.44 to 3.15. Agggh!!! I didn’t realise at first and I couldn’t figure out what was wrong. So if you are in Australia, get the English version and write a letter to the boss of Chrysalis records in 1974 and ask him to change the dumb decision he made.

The album has a classic Folk-Rock sound with the aforementioned track and also the UK album opener (Seven Hundred Elves). I say this often, it’s a classic but you have to like it. Not for everyone. There’s also a spoof track or two where they sing two songs pretending to be children under the name ‘St Eleye’ Primary School Junior Choir (the title track and Twinkle Twinkle Little Star) and then there’s a cover of To Know Him Is To Love Him (with Bowie on sax), eclecticism is great but on this record, an open-minded person would go with it, others might cry. Mostly though the album is really great and I even like the dubious bits, just not as much as the great bits. Founder member Tim Hart died in 2009 age 61. Original members Gay and Terry Woods left early but Gay returned as lead singer when Maddy Prior took a break. Ashley Hutchings, founding member of Fairport Convention, was also a founding member of Steeleye Span.

Two Magicians (Chorus repeats after every two lines).
She looked out of the window as white as any milk
And he looked in at the window as black as any silk

Hello, hello, hello, hello, you coal blacksmith
You have done me no harm
You never shall have my maidenhead
That I have kept so long
I’d rather die a maid
Ah, but then she said and be buried all in my grave
Than to have such a nasty, husky, dusky, fusky, musky
Coal blacksmith, a maiden, I will die

She became a duck, a duck all on the stream
And he became a water dog and fetched her back again

She became a star, a star all in the night
And he became a thundercloud
And muffled her out of sight

She became a rose, a rose all in the wood
And he became a bumble bee
And kissed her where she stood

She became a nun, a nun all dressed in white
And he became a canting priest
And prayed for her by night

She became a trout, a trout all in the brook
And he became a feathered fly
And caught her with his hook

She became a corpse, a corpse all in the ground
And he became the cold clay and smothered her all around

Pentangle is another classic Folk-Rock band from England featuring Bert Jansch on guitar and vocals, John Renbourn on guitars, Danny Thompson on double bass, Terry Cox on drums and Jacqui McShee on vocals. Between 1968 and 1972 they released 6 albums. My favourite is the last one, Solomon’s Seal (1972). It’s also Jacqui McShee’s favourite but not the deaf critics’. They reformed in 1985 minus John Renbourn and gradually shed members till just McShee and Jansch were left with Gerry Conway from Fotheringay on drums and other assorted musicians till 1995. For the next 15 years, it became Jacqui McShee’s Pentangle with Gerry Conway (they are married) – and assorted musicians.

The album opens with a classic version of traditional songwriter Cyril Tawney’s Sally Free And Easy, originally a sea shanty. Danny Thompson’s double bass and these two great guitarists with Jansch’s voice make an instant classic. Jacqui McShee sings the two traditional songs on Side 1, The Cherry Tree Carol and High Germany with Jansch singing another great track, The Snows. People On The Highway sung by both of them closes Side 1.

Another traditional song, Willy O’Winsbury, opens Side 2, it seems that McShee gets these songs in the band. No Love Is Sorrow is Jansch and McShee singing together again as they do on Jump Bay Jump and the last track, Lady Of Carlisle. This might be the appropriate time to mention the fact that as a Folk-Rock band they are as equally influenced by Jazz and Blues. Jansch and his wife Loren both died of cancer within two months of each other in late 2011, he was 67. John Renbourn died in 2015 aged 70.

Last album today is the Fairport Convention classic, yep, I’ve said it again, Liege And Lief, which was released in December 1969. The band was Sandy Denny on vocals, Ashley Hutchings on bass, Dave Swarbrick on violin, Simon Nicol on acoustic guitar, Richard Thompson on electric guitars and Dave Mattacks on drums. Like Fotheringay it was produced by Joe Boyd and features the perennial Matty Groves. The album has a mostly traditional influence and is considered one of the great influential albums of the era, creating a genre. There’s books about it, it’s hard to nail in a paragraph or two, so I won’t try, just listen to it.

Steeleye Span’s Greatest Hits – All Around My Hat mimed on Top Of The Pops:

And Gaudete, which you can tell from this that they don’t need to mime:

A note from the makers:

THREE AUDIO TRACKS HAVE BEEN “MUTED” DUE TO COPYRIGHT REASONS. THIS IS NOT AN ERROR. CONTINUE WATCHING AND THE SOUND WILL CONTINUE.

The film tells how five young musicians in North London formed Fairport Convention during 1967’s ‘summer of love’. The band went on to shake English folk music to its roots by fusing it with rock, an approach which outraged some purists but delighted a new and devoted audience.

The documentary has been made by London-based independent producer Special Treats Productions. The company’s previous television music documentaries include ‘XTC: This Is Pop’, ‘I’m Not In love: The Story of 10cc’ and the award-winning film ‘UB40: Promises and Lies’.

Through these interviews, the film examines Fairport’s first five years in detail, including the tragic motorway crash which killed drummer Martin Lamble. It goes on to explain Fairport’s pivotal role in the evolution of British folkrock; how the band fostered major talents such as Sandy Denny, Richard Thompson and Dave Swarbrick and spawned other notable bands including Matthews Southern Comfort, Steeleye Span, and Fotheringay.

The story is brought up to date with contemporary material filmed at Fairport’s annual ‘own brand’ music festival held at Cropredy in Oxfordshire. The closing sequence features the band’s 2017 festival performance when virtually all the surviving former members joined the current line-up on stage.

The Producer/Director has been working closely with Fairport for over a year. He says: “Our aim is to explain how important Fairport’s influence has been and continues to be – in other words, why the band matters.

“We have not set out to make a comprehensive, year-by-year history of Fairport; that has been done before. The film concentrates on two periods – the first five years and the band today. The result is a celebration of a very British institution and an assertion of Fairport’s continuing relevance.”