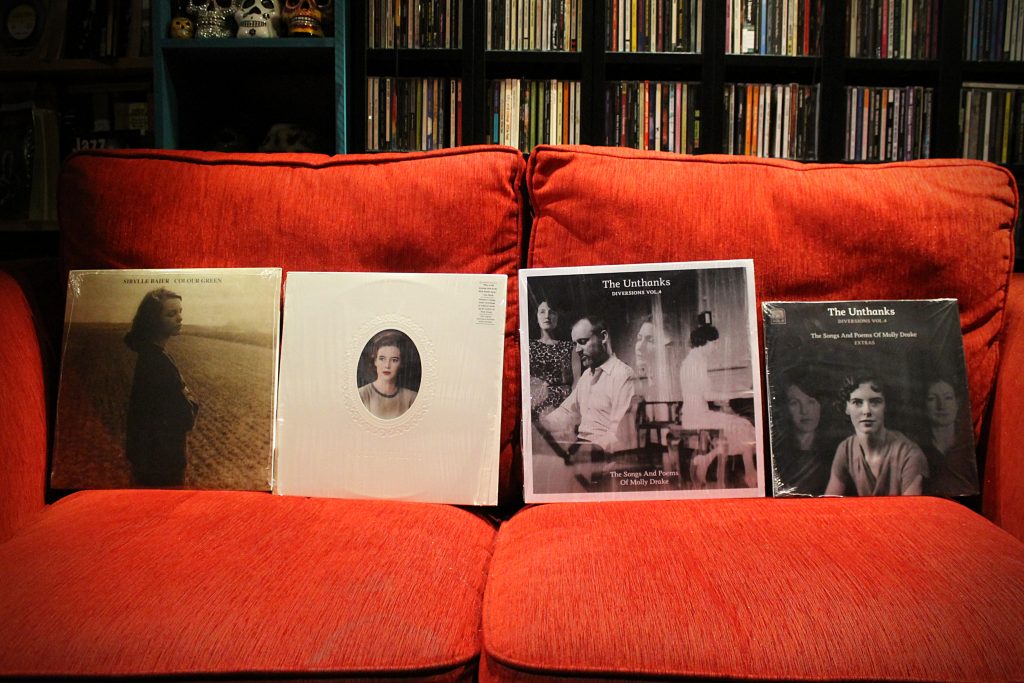 Music today comes from a record that arrived the day before yesterday by German singer and actress Sibylle Baier. Colour Green was recorded at home on a reel to reel tape recorder with just voice and guitar, between 1970 and 1973 (although the last track has more instrumentation). She appeared in director Wim Wenders’ film Alice In The Cities in 1974 but ended up not following a career in the arts, moved to America, got married and concentrated on bringing up her family. It’s a lovely album of softly sung self-written folky songs, with understated guitars. You’d never believe that English wasn’t her first language but then again I have Olivia. The songs were compiled onto a CD by her son Robbie and that disc found its way to Dinosaur Jr’s J. Mascis who in turn passed it on to Orange Twin Records, who released it on vinyl in 2006. In 2008 she appeared in another Wim Wenders film, Palermo’s Shooting, and wrote two more songs, one of which was released in the same year and used in the film.

How can you follow an album like this, easy, let’s listen to Nick Drake’s Mum. This is also recorded at home by her husband and Nick Drake’s father Rodney. It has Molly Drake writing the songs, singing and playing piano. Molly Drake, like her son Nick, was born in Rangoon, Burma, in 1915 and the songs reflect a person’s musical taste from that era, “heavy-hearted” as Wikipedia calls it, I call it ‘yearning’.

In 2017 the North East’s finest, The Unthanks’ sisters Becky and Rachel, recorded an album of Molly Drake’s songs and poems with the poems read by her daughter and Nick Drake’s sister Gabrielle. The album includes Adrian McNally on piano, Chris Price on bass and guitar and Niopha Keegan on violin and viola with all three also contributing vocals. McNally also manages the band and is the ex-husband of Rachel, they have two sons. Gabrielle Drake was born in Lahore, British India, in 1944 and is now 76 years old, just a year younger than her mother when she died. Gabrielle was in lots of your favourite TV shows in the sixties and seventies including The Avengers, The Champions, and with purple hair and silver suit as Lieutenant Gay Ellis in the 1970 Science Fiction series UFO. She also had a long stage career and was in many films, including There’s A Girl In My Soup with Peter Sellers.

Having been as big a Nick Drake nut as anybody, a nerd-like visit to the family home and Nick Drake’s grave in Tanworth-in-Arden in 2019 made for reflection at the loss of this great talent at the tender age of 26.

Featuring archive Super 8 film of Molly Drake with her children, Gabrielle and Nick Drake, some of which has never been seen before (except at live performances by The Unthanks). It is thought that it was recorded by a professional film enthusiast friend, probably not by Molly’s husband Rodney (who did record her songs), and it centres around Nick Drake’s christening at 3 years old.

Do You Ever Remember is taken from The Unthanks album Diversions Vol. 4 – The Songs And Poems Of Molly Drake, which can be ordered from www.the-unthanks.com