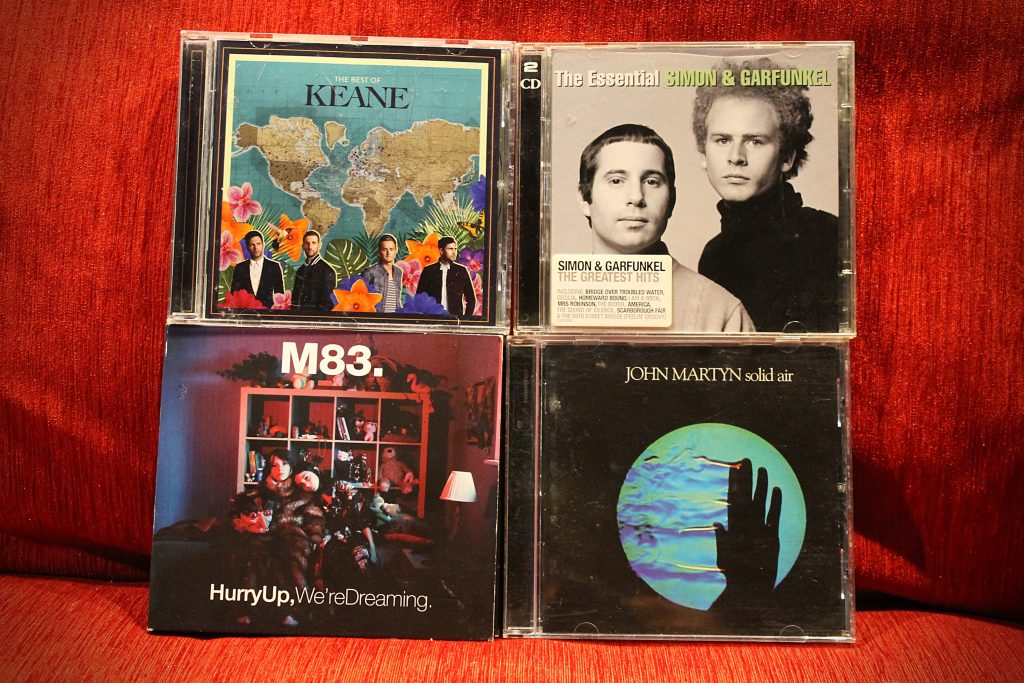 Music today, as in music that is going to be a soundtrack to putting records away, could be one of the CDs I bought today at a charity store in between summer and winter. Yes, that seems like a good idea, then I don’t have to worry about banging into the stereo as I’m moving things around and turning records over and not losing the cover in the upheaval.

So I’m going to start with Hurry Up We’re Dreaming (2011) by M83, French dream poppers. They hail from Antibes on the Côte D’Azur where you will find beaches and Jazz and little guitar orientated Rock music. You’d probably be hard-pressed to come up with 10 great French guitar bands generally but that’s what we do, they do what they do and this is an example. They are actually one man, Anthony Gonzalez, with guests and this is their 7th album. I have seen them live once in America where he now seems to be based. The album was nominated for a Grammy and like Daft Punk, French Electronic music is very very hip. Discussing the sound and process of creating this album, Gonzalez says it was “written like a soundtrack to an imaginary movie with different ambiences, different atmospheres, different tempos.”

I also picked up an Island remasters CD of John Martyn’s classic album Solid Air from 1973. This was his sixth album in a period when he was at his best. To say he went off the deep end later in his life is something of an understatement. He was a mad drinker and his death at 60 in 2009 was a tragic loss of a fantastic artist. If you don’t know his records you might want to start here and then as I do with artists I like, move backwards and forwards and find the classic records they made in the middle. Folky, jazzy, bluesy, take your pick. I saw him live once in Stockholm. It was a freezing night and he was playing in a place difficult to get to outside town. I got off the bus and walked a bit, saw a building and thought can this really be the place? There was nobody around. I found the door, got inside and it was packed with people and John Martyn was amazing. He played acoustic and electric, a Gibson SG using an Echoplex tape echo. Investigate!

The Best Of Keane, I don’t know. I like Tom Chaplin’s pure voice but I find myself drifting when I listen to them and when I see them I wonder if they speak to each other? Why do I have that impression? Also, they are piano-heavy and I guess it’s Tim Rice-Oxley’s musical baby (drummer Richard Hughes is also a co-writer) but I think they’d be better if they dared to use the guitar, it might de-yuppie-fy them a bit. Jesse Quin officially joined in 2011 as guitarist and bass player. They’re a bit safe, what’s he singing about? Is it personal or radio-friendly? But they certainly have catchy melodies and I like that about them, although it gets samey. It was the same issue with Ben Folds Five, it was all about the piano and even though the singing is strong, the songs are catchy and there’s craftsmanship in the songwriting, I feel like they could probably sell some Audis and their audience could afford one. All their albums have reached No. 1 in the UK except their last one which reached No. 2. Chaplin is a golfer, nothing wrong with that but the music is skilfully safe, like golf.

Last of the CDs I picked up and played tonight was a double CD of ‘The Essential Simon & Garfunkel’ which is also catchy, with great singing and radio-friendly songs, opening with The Sound Of Silence and even though there’s some dodgy timing, it’s another high level of deep. I’m not going to spend all night writing about Paul Simon’s skills as a songwriter and his and Art Garfunkel’s voices, as I mentioned the other day about The Beatles, there’s a lot to read about these famous people online and I’m not sure I really need me to add to it. So, just think of this as a reminder to listen to them.

“Song” Of The Day is John Martyn at Rockpalast, Germany, 1978 – the full concert: