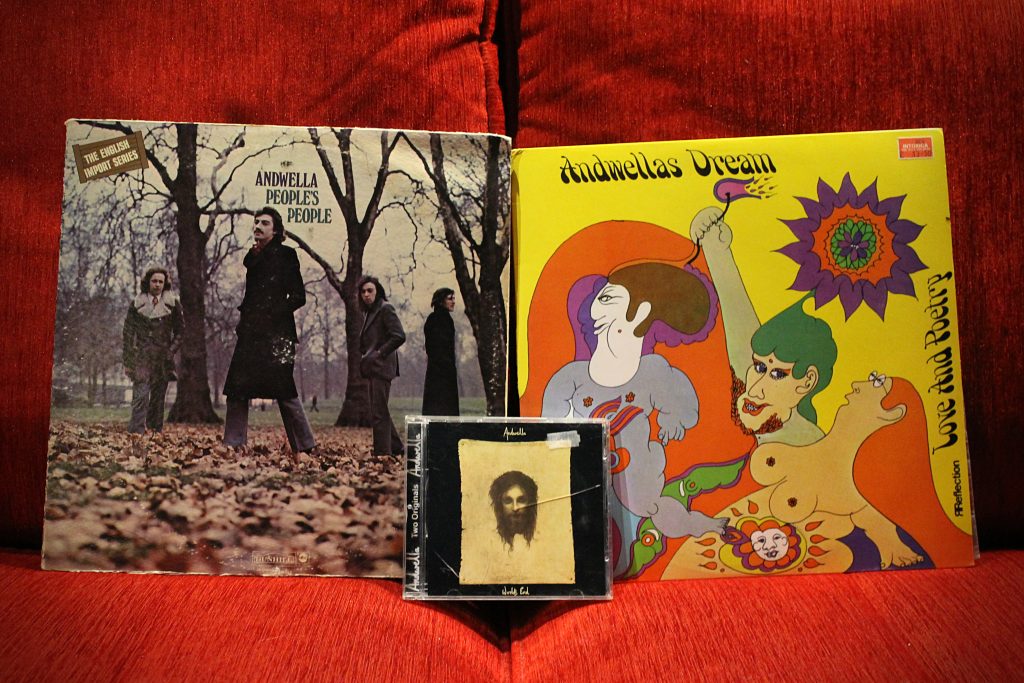 Music today is Northern Irish Psychedelic band Andwellas Dream who released one album, Love And Poetry, in 1969. All the songs were written by Belfast lad David Lewis before he was 18 years old. Although the album descended into obscurity, it’s a classic of the era. Lewis was joined by Nigel Smith on bass and Gordon Barton on drums. (Rory Gallagher’s first drummer Wilgar Campbell played one track.) Lewis not only wrote the songs, but he also played piano and organ, played all the guitars and was the lead singer. Jazzer Bob Downes played all kinds of esoteric percussive instruments and flute. It’s a mellow and dramatic album (not melodramatic), the songs are strong and moody and one wonders how they failed to make an impression with this album except that it might not be Psychedelic enough to be a true Psychedelic classic and not catchy sixties Pop enough to grab that crowd either. Cocaine is somewhere between The Zombies and Fleetwood Mac. It reminded me of the time when The Hollies went Psychedelic, the times were dictating the vibe but the songwriter remained the same, he was just adapting. There’s some great guitar tones and it has that sixties production that puts the drums in one side of the speakers in my stereo which begs the question was this album supposed to be listened to in mono? The reissue doesn’t mention mono or stereo anywhere, so who knows? On my last stereo amp, I had a mono button so I could listen with the music in the middle of the speakers if I wished, in case the idea of the drums in the left speaker was too strange.

By 1970 they had shortened their name to Andwella and released World’s End, only David Lewis remained, joined by Jack McCulloch on drums, Dave Struthers on bass, and Dave McDougall as a permanent piano and organ player. The album sails nicely into the seventies but again one wonders who was buying it. I like it a lot, it’s a grower but it suffers from a lack of direction, one foot in the sixties, one foot in the seventies and times were changing fast, you didn’t want to end up like The Tremeloes who despite sixties hits and good seventies records couldn’t get arrested in that decade. Lewis had also written the music for poet David Baxter’s album Goodbye Dave (1970) who was on the same label (Reflection). Super hard to find and expensive. Lewis seemed to have all the skills but not the successes and the variation on World’s End seemed to hinder him rather than help him. World’s End Part 1 theme, the only piece not written by Lewis but by American Bobby Scott, seems completely out of place on this album which is exactly why I like it. It’s supposed to set up World’s End Part 2 written by Lewis as if suddenly we are in the middle of a concept album, are we?

Andwella’s last album, People’s People was released in 1971. Lewis again wrote all the songs and again there’s different styles, The World Of Angelique might be a Glen Campbell or Gordon Lightfoot song whereas other songs might be a less Pop Badfinger, if Pete Ham was singing and Joey Molland was playing guitar you’d be cartwheeling around the room to Mississippi Water and probably to She Taught Me To Love as well. It’s as if Lewis is again following some kind of sound of the day, the first album one foot in sixties Pop and one foot in Psychedelia, the second album one foot in late sixties and one foot in the seventies and this last album has one foot in seventies Pop and another in singer-songwriter land. It’s as if Lewis the songwriter shouldn’t be Lewis the band leader even though he is, he should be writing for all kinds of different people. He made two more solo albums in the seventies but hit pay dirt when he wrote Happy To Be On An Island In The Sun for Demis Roussos, a UK No. 5. Roussos also recorded a German version (Komm in den Garten der tausend Melodien).

Song Of The Day is Demis does David and one has to ask what is he wearing? And what is that escaping from his chest on its way to devour the audience? The song itself doesn’t seem to have come out of David Lewis but then Lewis was nothing if not versatile plus Demis’ voice does things to anybody’s song. Don’t let this put you off listening to Andwellas Dream and Andwella and remember before this Roussos was in Greek Progressive Rock monsters Aphrodite’s Child! I’ll leave you with one quote from Wikipedia: “Roussos sold over 60 million albums worldwide and became an unlikely kaftan-wearing sex symbol”.