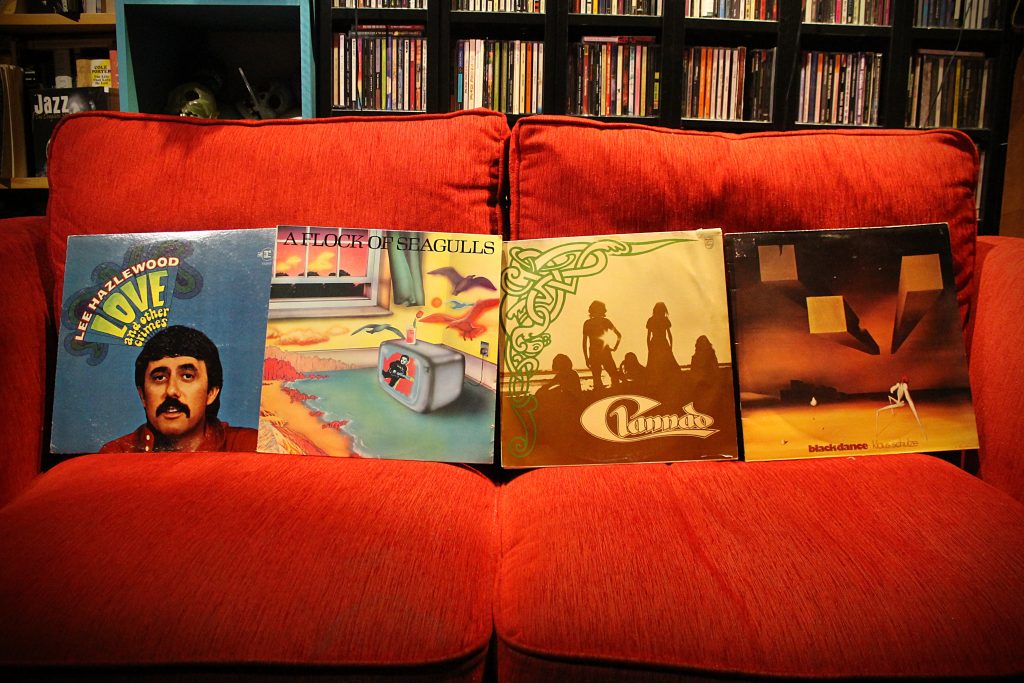 Music today has been inspired by birthdays and Earth exits. Today in 2007 the great Lee Hazlewood left for the stars aged 78. What he left behind is a vast catalogue of original material, collaborations, cover versions, productions, and that memorable baritone. He might be most famous for writing Nancy Sinatra’s No. 1 hit from 1966, These Boots Are Made For Walkin’, but in the fifties his successes began as the producer for Duane Eddy, hit after hit ensued. Involvement with Dean Martin, collaborations with Nancy and Frank (he produced Something Stupid) exposed a prolific artist who his wife Jeane Kelly was quoted as saying

He was rude and sweet, innocent and depraved, proud and bitter. He absorbed everything he heard, saw, and read – from Port Neches (Texas) to L.A. to Stockholm – and then made his own music in his own defiant way.

He wrote This Town recorded by Frank Sinatra, had his own record label LHI (Lee Hazelwood Industries) and lived in Sweden for 10 years. It’s hard to know what to recommend with him because there is so much, but I like the solo album Love And Other Crimes from 1968. Of course, you haven’t lived until you’ve heard Some Velvet Morning 100 times or perhaps Summer Wine and a whole list of other tracks that he either duetted with Nancy or wrote for her.

It’s Paul Reynolds’ birthday (58)! Who is that? Well, he was the guitarist in that band from Liverpool that were known as A Flock Of Haircuts but had the equally silly name A Flock Of Seagulls perhaps inspired by equally silly named Liverpool legends Echo And The Bunnymen. Nobody really seemed to take them seriously mainly because of how they looked and their hair but they had hits and Paul Reynolds had some ideas. I listened to the debut album released in 1982 with its equally silly cover of a combined TV and toaster sitting in a fantasy lake in a fantasy house with seagulls flying overhead. It is so eighties, consciously modern and on the coattails of Punk, and then New Wave helped wipe out Prog for years to come. What was unique about it was Paul Reynolds’ guitar, which separated it from the Synth bands, gave it a different sound to compliment Mike Score’s keyboard pads and the sound of his hair. Lots of delay and effects and lyrics about being abducted by aliens (I Ran), what’s not to like? The synth thing and biscuit tin snare sound leave a lot to be desired and when you compare this release to The Blurred Crusade you might wonder at how The Blurred Crusade didn’t get a US release until way later and made little impact outside Australia, must have been the haircuts. Anyway – Happy Birthday, Paul Reynolds.

Today is Moya Brennan from Clannad’s birthday (68) so I thought I’d listen to their debut album from 1973. The album is mostly sung in Gaelic but includes two English language songs plus absolutely coincidentally a cover of Bonnie Dobson’s Morning Dew which also appears on the Lee Hazlewood album. So it’s traditional Folk music and it’s a family affair. They were formed in County Donegal by siblings Ciarán, Pól, and Moya Brennan and their twin uncles Noel and Pádraig Duggan (Pádraig died in 2016). Sister and niece Enya was in the band from 1980-1982 until she embarked on a solo career that has seen her sell 75 million records worldwide making her one of the most successful artists of all time. Clannad have continued humbly on breaking ground in their genre as they investigated a jazzier side and New Age. This album is a worthy beautiful traditional and organic slice of Irish authenticity, not to be missed, highly recommended.

Ending the night with the great German Electronic legend that is Klaus Schulze. Earlier in Tangerine Dream’s history, he was their drummer and apart from flirtations with The Cosmic Jokers and Ash Ra Tempel and an alias Richard Wahnfried, he has made 60 albums to date. Good luck collecting them all. If you were a fan of Klaus Schulze, Peter Hammill and Frank Zappa and had everything they’d released you’d have one very full room of records. Again it’s hard to know which album to play and perhaps the best way to categorise them is to separate them into eras. Sticking to the seventies and one of the first albums I ever listened to by Schulze was Blackdance from 1973 and coincidently he was 73 today and more profoundly coincidental, the second track is called Some Velvet Phasing. He didn’t always just stick to electronic instruments and for example, on this album, some acoustic guitars come into the picture quite early on. It isn’t long before the rhythm machines and the squiggly electronic noises, drones and themes and operatic voice. Investigate!

Song Of The Day is Some Velvet Morning which I have posted before but it never gets old.