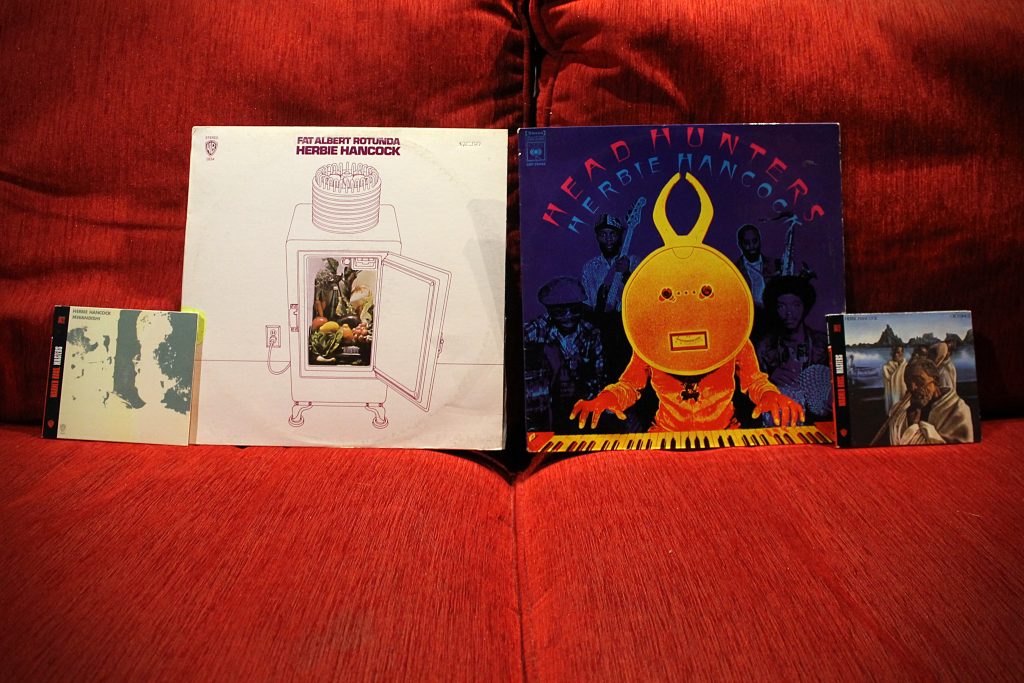 Music today is some instrumental albums from Herbie Hancock starting in 1969 with Fat Albert Rotunda (1969), his eighth, and first album for Warner Brothers after leaving Blue Note. It signalled a change in direction from Jazz to instrumental Soul, in this case made for a TV special which might have demanded a change from where he was musically with Blue Note. It’s more middle of the road, it had to be.

But then for the next three albums, he began searching, starting with Mwandishi (1971), then Crossings (1972), and Sextant (1973), and then the Jazz Fusion defining classic Head Hunters (1973). I don’t have Sextant or any of the earlier albums but do have sporadic records into the seventies and eighties. Herbie Hancock is a legend in his genre and famously played with Miles Davis as well as creating his own bands with the cream of Jazz musicians of whichever era he was in. (His first solo record was 1961.)

Mwandishi is something of a left turn. When you consider the Jazz of his earlier sixties albums this is a jump. Each member of the sextet adopted a Swahili name, Hancock’s was Mwandishi which means composer. But if you liked In A Silent Way (1969) by Miles Davis you are probably going to like this. Surprisingly Ronnie Montrose plays on the opening track but the core sextet of Buster Williams (Mchezaji) – bass, Billy Hart (Jabali) – drums, Eddie Henderson (Mganga) – trumpet and flugelhorn, Bennie Maupin (Mwile) – flute and bass clarinet, and Julian Priester (Pepo Mtoto) – trombone was the starting point for Hancock’s journey into these three experimental albums that must have been inspired by making In A Silent Way in February of the same year.

It’s always the experimental albums that I like (by anybody) and I just ordered Sextant (£2.99) – bargain. Tonight I can listen to it on Spotify. Each of the three exploratory albums has three long tracks and takes you on an exotic journey of rhythms, sounds and grooves with pianos and percussion, trumpets and saxophones, busy basses and soundscapes. I love these kinds of musical journeys.

On Crossings, the track Water Torture really sounds like soundtrack music to a sci-fi movie. It’s a long way from middle of the road or Be-Bop Jazz. On this track and the second track Quasar, you can thank Moog player/synth pioneer Patrick Gleeson who was brought in to set Hancock up with the new-fangled machines but Hancock was so impressed with Gleeson he had him join the group. He’s kinda like what Eno was to Roxy Music except Roxy Music sound like Herman’s Hermits next to this. These last two songs are credited to Bennie Maupin, the sax/flute/clarinet player. I can never figure out how jazzers’ credits work, it sounds like one big crazy space-age jam to me and if this is all written out then they have very special brains.

Sextant carries on opening with electronic weirdness galore mixed with trumpet as it glides its way into groove land. I can’t recommend these three experimental albums enough but you do of course have to like the idea. If you are still with us by the time you get to track 3 on Sextant, the 20 minute Hornets, then I guess you like it.

Head Hunters was a different thing altogether, a different band, a different vibe, a funky groove that made the jazzers, the Blues guys, the Rock people and the funkers happy. It was the biggest selling Jazz album to date (till 1976 when George Benson took over with Breezin’). Only Bennie Maupin survived from the sextet, Hancock played all the synths. Paul Jackson played bass, Harvey Mason played drums with Bill Summers on percussion. To give you an idea of just how funky it was, track 3 is called Sly.

There are so many albums to investigate it’s hard to know where to start, like anything, it just depends on what kind of thing you like but if you are a fan of Joni Mitchell you might like River: The Joni Letters from 2007 where he covers her songs. He played with her on Mingus in 1979 and has been friends since. The album won a Grammy in 2008. In 2014 he played on You’re Dead by Flying Lotus, I’m a fan and have the albums and one day I’ll break them out. The problem with all these artists is that they are deep or have deep catalogues or both, you could write volumes about them and listen to them for weeks, so please do.

Songs Of The Daze – Herbie Hancock and the band live in Molde, Norway, 1970. Those crazy Norwegians, they understand this stuff! I know, I’ve played there with Anekdoten!