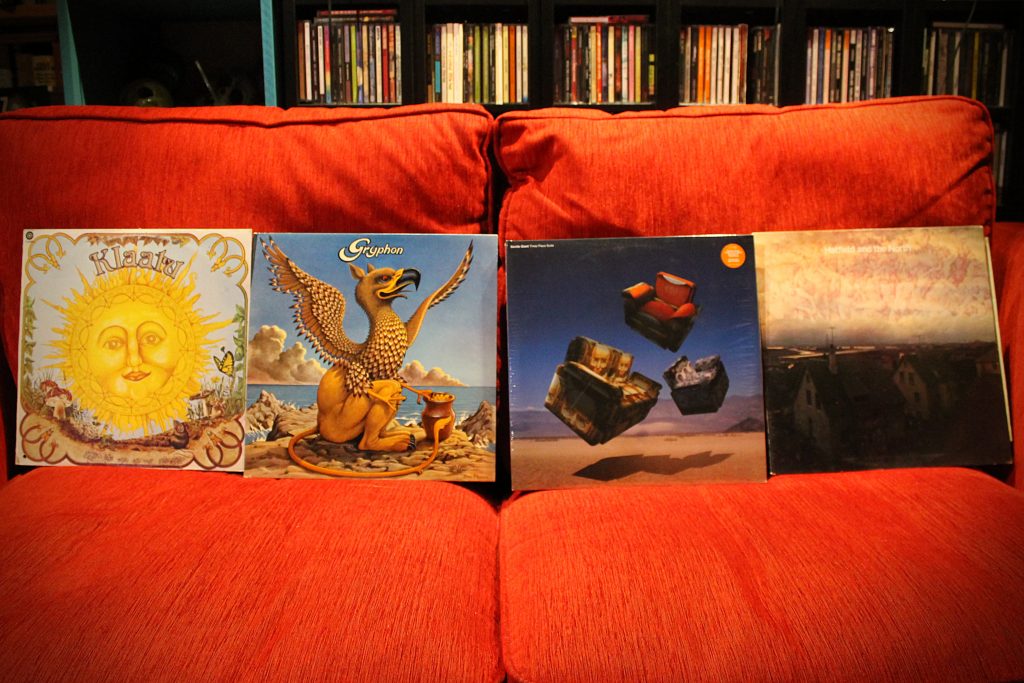 Music today is first by the band people thought were The Beatles incognito but weren’t! Klaatu were initially two Canadians, John Woloschuk (lead vocal, keys, bass, acoustic guitar, percussion) and Dee Long (electric guitar, keys) and joined by Terry Draper on the drums. They are a strange mixture of The Beatles meets Queen at a children’s party with machines that occasionally go ping. Most famous for the song Calling Occupants Of Interplanetary Craft which is better known as covered by The Carpenters. A rumour was started that it was actually a secret Beatles reunion based on various hazy clues that included the fact that the album had no credits, they were on Capitol Records, they had a Beatlesque sound and Ringo had appeared as Klaatu from sci-fi film The Day The Earth Stood Still on the cover of his Goodnight Vienna album. All this made the album sell much better than it would have done. There are certainly some great moments but also some dodgy ones. The album is some kind of Progressive Pop, a symphonic catchiness pervades. They went on to make 5 albums between 1976 and 1981 but the main one is their first, 3:47 EST, named after the time Klaatu arrives from outer space in Washington DC. Worth a listen.

Gryphon released their first album on Transatlantic Records in 1973 with its striking cover and odd blend of Medieval, Renaissance, Progressive, and Folk – a unique combination. Two members, Richard Harvey and Brian Gulland, graduated from the Royal College of Music in London playing all kinds of strange instruments such as the crumhorn, the trombone, the bassoon, the recorder, the mandolin and keyboards. They were joined by guitarist Graeme Taylor and drummer Dave Oberlé who became the lead singer. They were once described as Henry VIII in a R’n’R band. Sounds terrible but I’m a big fan and have all their records of which they made five between 1973 and 1977 and one in 2016. When they split up in 1977 Harvey and their third seventies bass player Jonathan Davie formed Punk Rock group The Banned which was a long way from the original Gryphon being hired to write the music from Shakespeare’s The Tempest for a production at The National Theatre – those intellectuals are so unpredictable.

The prolific Steven Wilson has managed success beyond his wildest dreams and even beyond the wildest dreams of people that like the kind of music that he makes. But apart from that mega story, he is also a respected engineer and remix guru of classic albums from the Prog era (and XTC). So when we heard about Three Piece Suite, remixes of the first three Gentle Giant albums, we here in Prog land were overjoyed. Problem is that most of the master tapes are lost so what we got was nine tracks from the first three albums, Gentle Giant, Acquiring The Taste, and Three Friends. These first three albums starred the three Shulman brothers Derek, Ray and Phil on a million instruments and vocals, Kerry Minnear on keys and cello and Gary Green on guitar with Martin Smith on drums for the first two replaced by Malcolm Mortimore on Three Friends. If you are trying to find your way into the world of Gentle Giant I generally advise people to start with Octopus because that’s where I started, going forwards and backwards accordingly. But this might be a good place to start if you’d like to investigate a spruced-up version of tracks from those first three gems. For me, calling myself a mega fan doesn’t really cover it, I can’t believe I never saw them live back in the day. How did I miss them? They were there in Liverpool, I was there, I must have been broke or in trouble.

Last but not least today the madmen that formed Hatfield And The North made this fantastic complex, tricky and beautiful debut album in 1974. Dave Stewart on keys, Richard Sinclair on bass and vocals, Phil Miller on guitar and Pip Pyle on drums with guests, one of which is that great man, Robert Wyatt. The Canterbury Scene claims responsibility for music like this and you can thank Soft Machine, Matching Mole, Caravan, Gong, Steve Hillage and I shall never tire of it. I’ll never forget the day when I saw the sign at the beginning of the Motorway M1 in North London that inspired the name.

Gryphon play the 3rd Movement of Midnight Mushrumps at The Union Chapel on Friday 29th May 2015:

1. Halfway Between Heaven and Earth
2. The Yes No Interlude
3. Fitter Stoke Has a Bath
4. Didn’t Matter Anyway