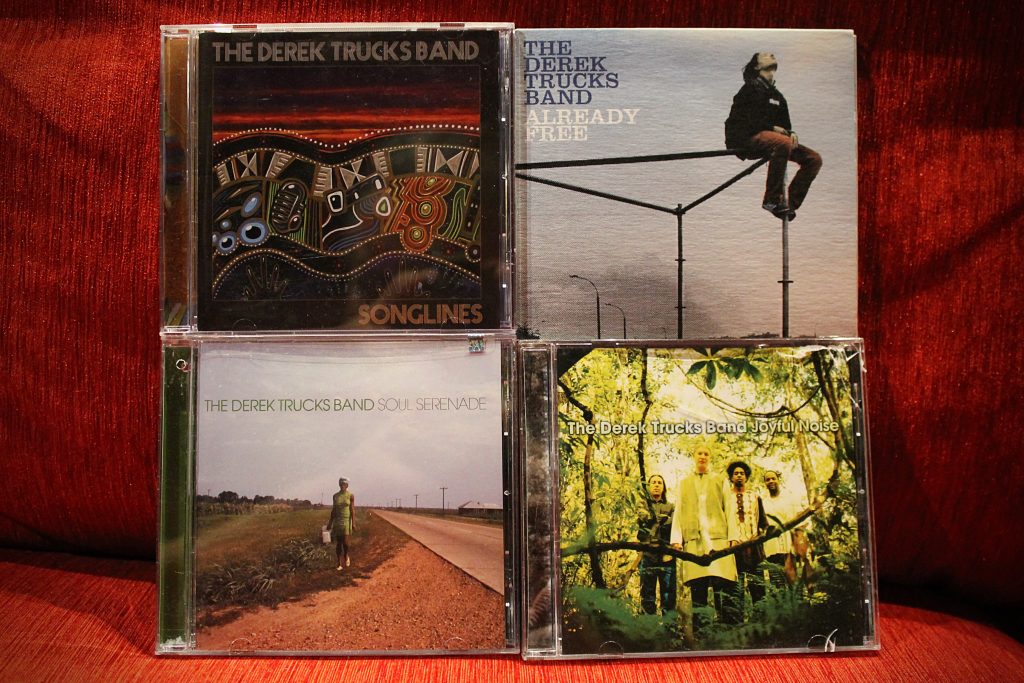 Music today has been the wonderful guitar playing of Derek Trucks and his band starting with his third album Joyful Noise (2002). He was just 23 when he made this album and he has said himself that it helps being the nephew of Butch Trucks, long time drummer in the Allman Brothers who he had joined in 1999. But he was there because of his skilful, emotional slide guitar playing, Duane would be proud. With the death of Butch Trucks and Greg Allman one imagines that the band is over unless tribute tours ensue.

His style seems to be a mixture of Jazz and Blues but he seems to live in some kind of mystical bubble. On this album, he repays the ‘nephew’ concept by having Rahat Nusrat Fateh Ali Khan, nephew of Pakistani Qawwali singer Nusrat Fateh Ali Khan, guest and it’s the inclusion of material like this that takes Trucks into another world, his slide guitar fitting in as effortlessly with this as it does with tracks that feature Solomon Burke (considered by some to be the king of R&B/Soul), more in keeping with what you might think Trucks’ style is. But it simply works for both singers and the contrasts between the two might be as unlikely as the next track that features Panamanian Salsa and Latin Jazz star Rubén Blades. Susan Tedeschi, Blues singer and Trucks’ wife also appears on this album. I’m not sure if they were together at this point but the two have played together in the Tedeschi Trucks band for the last 10 years which has seen Derek Trucks band albums take a back seat. The last one was Roadsongs in 2010. Joyful Noise follows no known path, jumping from Fusion to Blues to Soul to World Music in the blink of an eye and it’s all the better for it.

The fourth, Soulful Serenade (2003), is actually the third album, made before Joyful Noise but held up in legalities. Jazzy and Bluesy with some Reggae nods to Bob Marley in the opening track and featuring Greg Allman on Drown In My Own Tears. Cuban Mongo Santamaría’s Afro Blue keeps up the connection to Latin Jazz as Trucks determinedly refuses to be seen or pigeon-holed purely as a Blues artist, yet.

Next album was Live At Georgia Theatre (2004) where his guitar playing virtuosity shines. It was followed by perhaps his most famous solo album, Songlines (2006). Although it has the usual high-quality guitar playing it also features Mike Mattison on lead vocal and he is really good but something has started to happen. There’s another Nusrat Fateh Ali Khan song on this album where Trucks’ guitar takes on a voice all of its own, it’s special but there’s not enough of it. The inclusion of Chevrolet credited to Ed Young and Lonnie Young is confusing because it’s the same song as Hey Gyp (Dig The Slowness) on Donovan’s Sunshine Superman credited to him. Explanations anyone? If you don’t want those genre tangents this album is altogether more accessible, fitting in with an audience that’s less adventurous, but although I like this record, gimme tangents, always.

Already Free (2009) won a Grammy for best Blues album which is always a worry because it seems to mean mainstream Blues, there’s less probing the new ideas and less messing with the genre’s minds. Tedeschi Trucks won the Grammy for Revelator in 2012. I once went to see a Blues package in Sydney and it suffered the same issues. It was Shuggie Otis who I really like from his albums, Taj Mahal and Robert Cray. Robert Cray was so middle of the road, Taj Mahal wasn’t very Bluesy and Shuggie didn’t seem to have the magic anymore. On a side note, Eric Clapton seems to have made both amazing and terrible records, how come? The fact is if you are going to play the Blues you have to be amazing otherwise it’s just old hat. Already Free is a really good mainstream Blues album if you like that kind of thing. His guitar playing is always special but I wish he would just go on mad tangents with that inimitable style of his but it seems there’s little chance of getting Grammy-winning bands to make experimental Blues, at one point he was almost doing it and that’s what I loved about him.

Song Of The Day is Sahib Teri Bandi / Makki Madni – NFAK (The Derek Trucks Band – live at Crossroads 2007. Derek Trucks talks about it with his guitar:

Derek Trucks talks about it with his words in 2006: