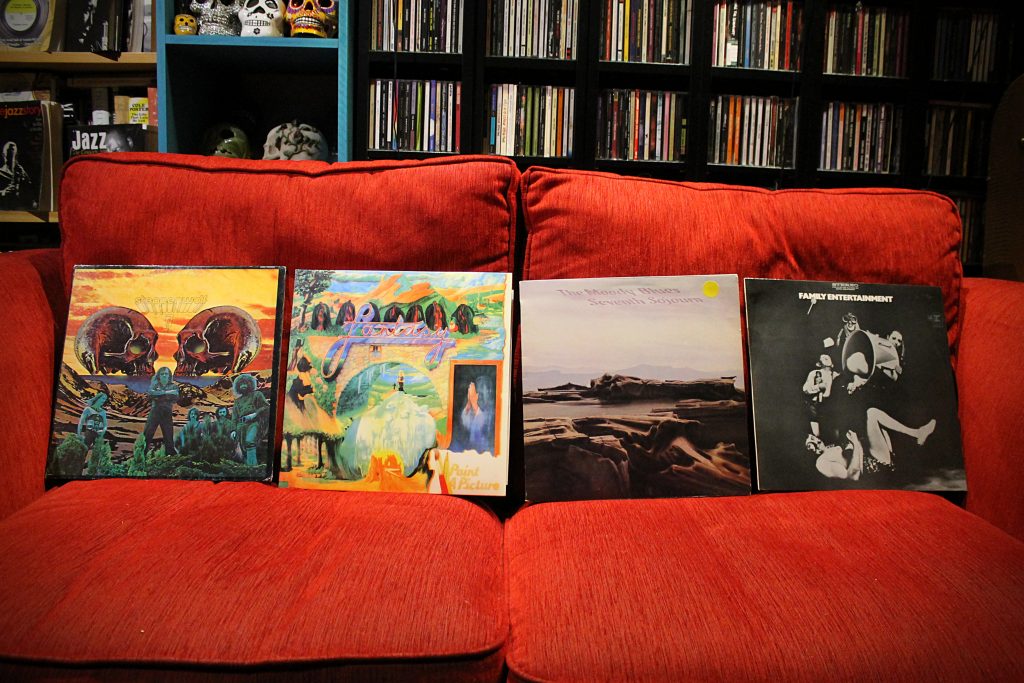 Music today was actually all the other records Nicklas mentioned that I do have: Steppenwolf – 7 (1970), The Moody Blues – Seventh Sojourn (1972), Fantasy – Paint A Picture (1973), and Family – Family Entertainment (1969), all chosen for their sound. Monster was Steppenwolf’s fourth album and the first not to have any Top Ten hits but the album still made it to No. 17 and two singles made the Top 40. Lots of political songs, lots of Vietnam awareness and that sound of then. It’s like the forgotten art of illuminated texts.

Steppenwolf are most famous for Born To Be Wild and the line “Heavy Metal Thunder”. Most people think they were American but they were, in fact, Canadian, originally called The Sparrows. They moved to California in the sixties and that’s where it all took off and why they weren’t drafted. But in actual fact they weren’t even Canadian, they were essentially German.

Lead singer John Kay’s real name was Joachim Fritz Krauledat. His family fled the Russian advance from East Prussia to East Germany and eventually found themselves in Hanover before emigrating to Canada. That’s where The Sparrows formed with Nick St. Nicholas or his real name Klaus Karl Kassbaum. When they changed their name to Steppenwolf, Kassbaum had decided to play with another band but he was back in the fold in 1969 for their third album At Your Birthday Party and Monster the same year. Guitarist Michael Monarch, drummer Jerry Edmonton and keyboardist Goldy McJohn with original bass player Rushton Moreve were the core band that had the well-known hits, Born To Be Wild, The Pusher and Magic Carpet Ride. Rock Me was on At Your Birthday Party. (Moreve died from injuries sustained in a car accident aged 32.) On Steppenwolf 7, Monarch was replaced by Larry Byrom and Nick St. Nicholas by George Biondo. Last but not least it was Jerry Edmonton’s brother and ex Sparrow Dennis, aka Mars Bonfire that wrote the world-famous song, Born To Be Wild.

Fantasy’s Paint A Picture is an obscure Progressive Rock album that was really good but nobody noticed. At times I hear Bowie although all members were credited as vocalists, I think it’s Paul Lawrence who is the lead singer and plays 12 string. David Read plays bass, David Metcalfe on keyboards, Peter James on lead guitar and John Webster on drums. It’s moody, it’s melodic and although you’ll never find an original pressing under £1000 you have to have it and you can buy a reissue vinyl copy or a CD for a very reasonable price on Amazon. There’s a CD of their second unreleased album Beyond The Beyond that I just ordered. It doesn’t seem to be on Spotify but you can hear it below if you’d like to investigate before you commit.

The Moody Blues released Seventh Sojourn in 1972 and although I love all of their early seventies and late sixties albums, this one has a special place in my heart because it’s the first one I knew well enough to almost sing along with (I know lots of the words on various songs). Only I’m Just A Singer In A R’n’R Band I can live without. All the other tracks are beautiful. If you don’t like this you don’t like rabbits and who doesn’t like rabbits. It’s so lush with Mike Pinder’s Mellotrons and Chamberlins and Justin Hayward’s great guitar lines. John Lodge sings Isn’t Life Strange and Ray Thomas contributes For My Lady, Graeme Edge plays drums. Beautiful melodic songs and heartfelt meaningful lyrics, look out rabbits, you have competition in succumbing to an irresistible spell.

Family released Family Entertainment in 1969 and like all these sixties and seventies Family albums, if you don’t have them in your collection it’s like having a classic car museum with no Aston Martin. Original, innovative, moody, aggressive, melodic, angular and with Roger Chapman’s ridiculous voice you can’t have lived on the planet Earth without experiencing it although on this album Jim King sings a lot of the lead vocals too. The original band was Charlie Whitney on guitars, Jim King on sax, vocals, and harmonica (real name Alec Woodburn), Rob Townsend on drums, Ric Grech on bass, vocals, and violin with Roger Chapman on vocals. King and Grech had gone by the third album, A Song For Me (1970), replaced by John Weider on bass and violin and Poli Palmer on piano, vibes, and flute. John Wetton joined on bass for the 5th album, Fearless (1971), and the sixth album, Bandstand (1972), that had their biggest hit, Burlesque. I bought the single when it came out (I still have it) and the love affair has continued. Their first album, Music In A Doll’s House (1968), allegedly beat John Lennon to the same idea for a title (The White Album?).