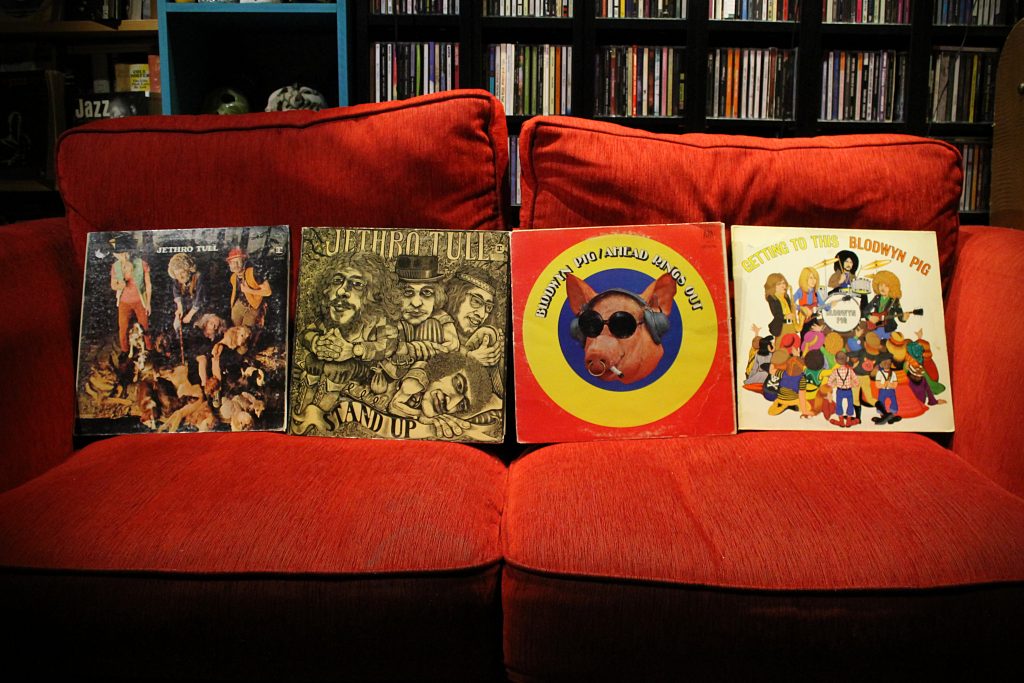 Music today had me investigating the recently released Jethro Tull Live At The Isle Of Wight in 1970 album and wondering if I should buy it because older Jethro Tull records I like and I mean the oldest ones, the bluesier ones (ok there’s a couple of seventies ones I like too). I listened, yeah, I like it. I like anything from 1970 (haha). So that made me dig out This Was (1968). This album had the early lineup with Mick Abrahams on guitar, Clive Bunker on drums and Glen Cornick on bass with whatsisname on flute and vocals. It’s Anderson and Abrahams mixing their ideas together and so Abrahams had to go and left after this album to form Blodwyn Pig. Anderson became the unquestionable leader that led to some amazing and some terrible albums, that’s what happens. But this album like yesterday’s Family Entertainment has the leader letting the other guy sing because he hadn’t assumed absolute power yet. I like this album, it’s different to their others and I always know a good album when well-known critic Robert Christgau hates it.

Their second album, Stand Up (1969), saw Abrahams replaced by Martin Barre who would stay with the band for 44 years, Cornick and Bunker remained for now. The album went to No. 1 in the British charts. There was also a non-album single, Living In The Past, that went to No. 3 in the singles charts. The album went Top Ten in the Dutch, German, Norwegian and Danish charts and Top 20 in America. It was the beginning of a long and successful career. Stand Up even won the New Musical Express award for best album cover art of 1969. The album cover was a wood carving of the band members with a ‘pop up’ in the gatefold. My point in telling you all this is that once unhip bands were both hip and successful despite how they are seen today – Genesis were hip, popularity and the changing times put an end to it all (as did their music) but their popularity remains. The final nail in the hip coffin of Jethro Tull was when they won the 1989 Grammy for Best Hard Rock/Heavy Metal recording for Crest Of A Knave over Jane’s Addiction, Iggy Pop and Metallica. It’s another example of people in charge not having a clue.

When Abrahams left Jethro Tull he formed Blodwyn Pig with saxophonist and flautist Jack Lancaster and included Andy Pyle on bass and Ron Berg on drums. They recorded Ahead Rings Out (1969) and reached No. 9 on the UK chart. It’s in the direction of the Blues and the reason that he left Jethro Tull. If you like the bluesy or the jazzy bluesy scene of the era you’ll like this as well as the second album, Getting To This (1970). The second album did well too, reaching No. 8 on the chart but that was about it for them and apart from the occasional reunion, these two albums were all that mattered.