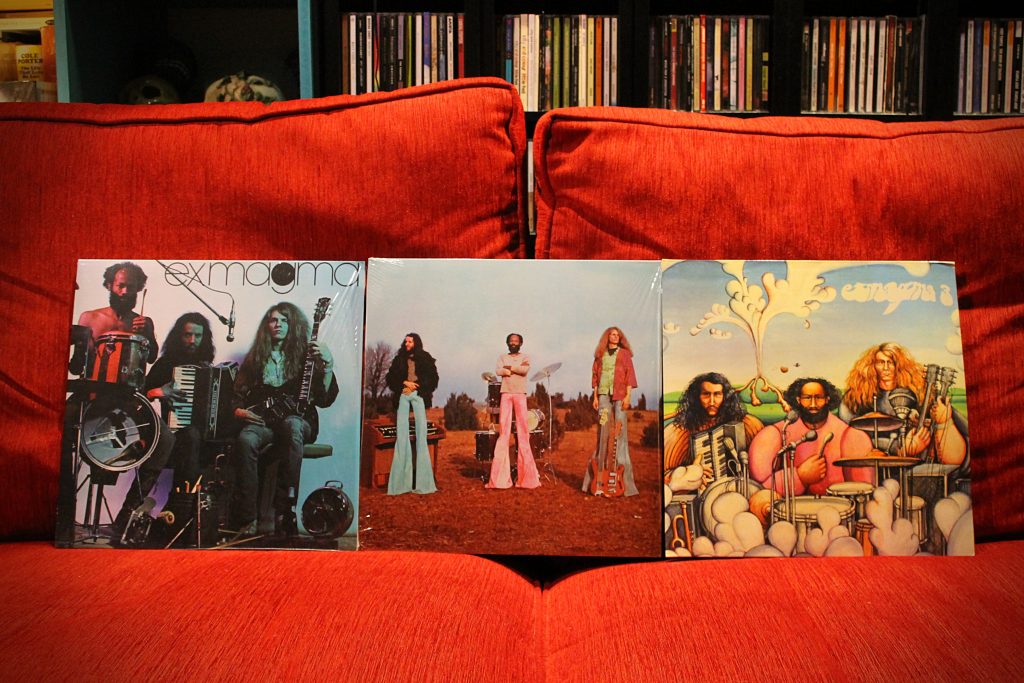 Music today has been catching up on Exmagma, the German experimental Jazz and Krautrock band whose record I had to have because of the band members’ fantastic flared jeans. Just that alone told me it was going to be interesting and so I went ahead and bought the other two available albums. The band was Thomas Balluff (keyboards, trumpet, flute, vocals), Andy Goldner (guitars, bass, sax, vocals), and Fred Braceful (drums). They were formed in Stuttgart in the early seventies, their first, self-titled, album was released in 1973, their second, Goldball, in 1974 (the most accessible musically) and their third, Exmagma 3, a double album that seems to be more vocal orientated on Sides 1 & 2 although it’s not exactly singing. It does have the classic line: “Do you still like this R’n’R music, don’t you think it’s time for a change?”. Sides 3 & 4 seem to be more jamming with strange sounds. It was recorded in 1975 but not released until 2006.

Fred Braceful was actually an American based in Germany with the military, he settled in Stuttgart when he was discharged. He worked with some notable German Jazz musicians in the sixties (pianist Wolfgang Dauner). He died in 1995 just short of his 57th birthday. Their sound was something like Matching Mole meets the avant-garde dressed as Rock musicians. The range of instruments Balluff and Goldner played made it difficult for them to play anything straight and there was a lot of jamming, exploring and improvising going on, often more in the direction of sound searching rather than actual music. Highly recommended if you like tall men in very long flared trousers that answer to nobody (the trousers that is).