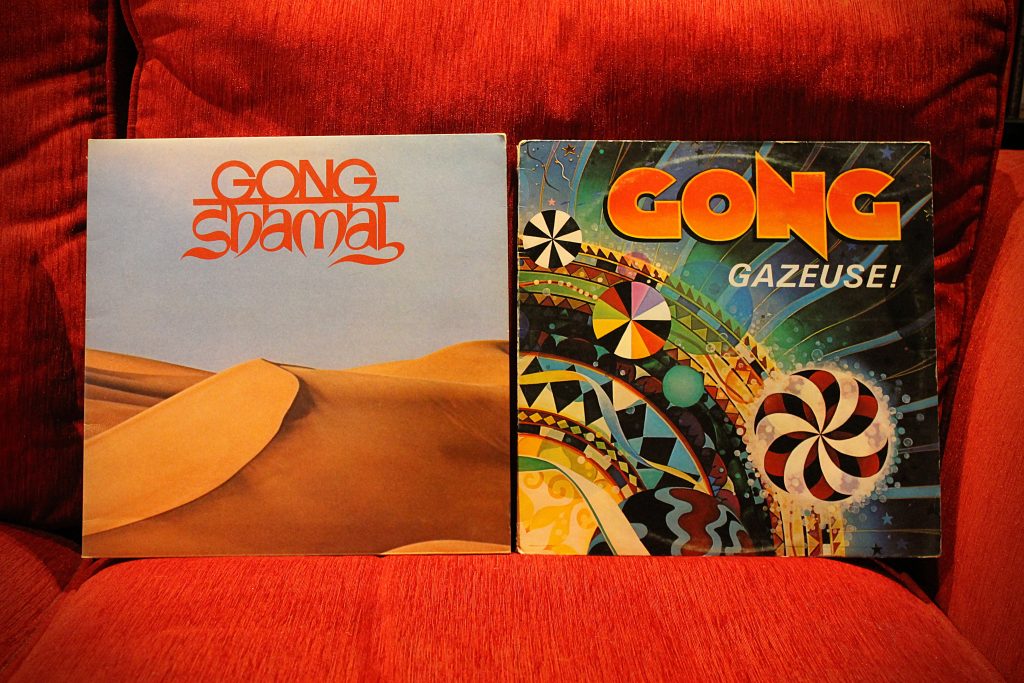 Music today is still on the progressive jazzy fusiony trip but with a different flavour, Pierre Moerlen’s Gong – the album Shamal was released in 1976. I’ve had this album and the follow-up Gazeuse!, also released in 1976, since then. Shamal was produced by Nick Mason and is the transition between Daevid Allen’s cosmic Gong and Pierre Moerlen’s Fusion gong. It features Mike Howlett on bass and vocals who later produced your fave bands from the eighties, A Flock Of Seagulls, The Alarm, Tears For Fears, Blancmange, Gang Of Four, China Crisis and many more – the complete opposite of Gong.

Mireille Bauer plays all the marimba, glockenspiel and xylophones to great effect on this album. Patrice Lemoine on keys, Didier Malherbe on saxes and flute and Moerlen on drums with various band members playing percussive instruments. So it’s a mainly French affair except for Howlett who is a Fiji born ex Sydney sider. Ex Gongers Steve Hillage and partner Miquette Giraudy guest on guitar and keys on two tracks. Jorge Pinchevsky guests on violin and Sandy Colley on vocals on the title track. It’s very much a World Music influenced record. Highly recommended (if you like this kind of thing).

Gazeuse! is the same kind of thing with a slightly different lineup that includes the edition of virtuoso guitarist Allan Holdsworth (he also plays violin and glockenspiel, who knew). Didier Malherbe and Mireille Bauer remain in the lineup with the addition of Benoît Moerlen on extra vibraphone. Francis Moze plays bass, gong and piano. Mino Cinélu plays percussion. The album was produced by Dennis Mackay who has an impressive CV and no Wikipedia page. It’s warm, inventive World Fusion, what’s not to like?