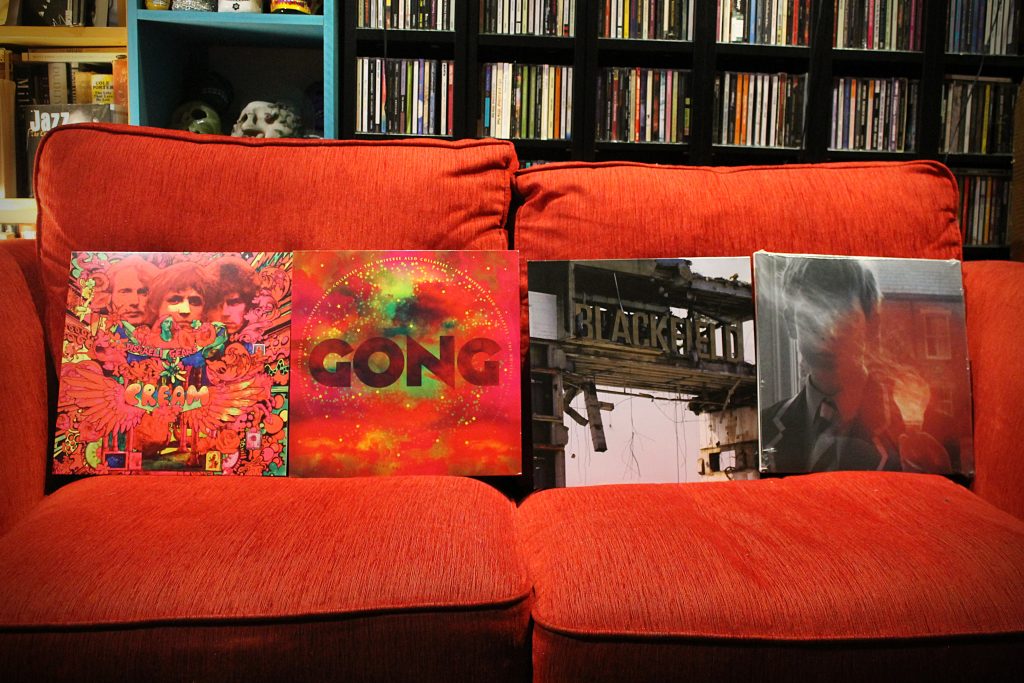 Music today had me craving Cream’s Disraeli Gears (November 1967). What kind of music is it? Sixties? Psychedelic? Blues? Well, it’s Sixties Psychedelic Blues, with real songs and words and excellent sounds. It opens with Strange Brew, written by Eric Clapton and the late Felix Pappalardi, lyrics by the late Gail Collins and what I realise is that this music doesn’t suffer from the chains of Blues tradition or the loose risk of Psychedelia despite its legacy and influence. Even the second track, Sunshine Of Your Love, which should be oozing safety in the Blues genre, doesn’t dominate when you put together the personalities, the talents and the visions of these three unique individuals – Eric Clapton, Jack Bruce and Ginger Baker. It’s such a great album, I recently bought a brand new copy (because it was so cheap) when I already had multiple original copies, to have a copy in pristine condition is essential. I did the same with T.Rex’ Electric Warrior.

World Of Pain swirls around like a wind (Collins’ lyrics again), Dance The Night Away features Clapton on electric 12 string and the side ends with Baker’s slightly strange Blue Condition. Side 2 opens with the amazing Tales Of Brave Ulysses and its surreal lyrics, Bruce’s voice, that Clapton wah-wah and Baker’s tom-heavy drum beat. The song was a collaboration between Australian Martin Sharp and Eric Clapton. Sharp not only wrote the lyrics to this song but was also responsible for the Disraeli Gears artwork as well as for the next double album, Wheels Of Fire.

AllMusic’s Matthew Greenwald calls it, “One of a few overtly psychedelic songs to have aged gracefully…Lyrically, it’s a relatively factual and colourful rendering of the great Greek tragedy Ulysses”.

She Was Like A Bearded Rainbow or SWLABR is next, with lyrics by poet Pete Brown who was a lyrical collaborator with Bruce on Dance The Night Away and Take It Back and with Bruce and Clapton on Sunshine Of Your Love. Outside Woman Blues was written by Blind Joe Reynolds, despite the solos and the Blues riffs it still sounds like something beyond the genre, that’s Cream’s genius and if you want humour then final track Mother’s Lament somehow manages to justify its existence too.

Gong’s The Universe Also Collapses (2019) carries on the tradition of this bizarre group which when it formed in the sixties might have been seen as more of a lifestyle, a philosophy, rather than just a purely musical endeavour. In the wake of Daevid Allen’s (Gong guru) death in 2015, the responsibility for the world of Gong has been handed to singer-guitarist Kavus Torabi and his merry men – Fabio Golfetti on lead guitar, Dave Sturt on bass, Ian East on sax and Cheb Nettles on drums. You can see Daevid Allen smiling down on its unlikely success without him, although it was with his blessing, he knew it would work with these people. It’s Progressive Rock with a twist, spacey stories and cosmic vibes permeate the music. Olivia and I have seen them live twice and they are a cosmic inspiration. Fabio even sent us CDs of his Brazilian band Violeta de Outono, highly recommended.

Steven Wilson’s collaboration with Israeli musician Aviv Geffen began in 2004 with the Blackfield project. It’s perhaps the strongest project outside his Porcupine Tree and solo output that has now grown to five albums although his involvement has been sporadic in the middle period. It’s that classic thing he does, Progressive but with real songs, melodic, memorable, beautifully produced. If you have not yet discovered Blackfield, the first two albums are gems. Both Wilson and Geffen sing and write. Geffen is a big star in his own country (Israel), Wilson is married to an Israeli girl. This album is Blackfield II (2007), Olivia’s favourite Blackfield album – and she knows everything about Steven Wilson’s output.

Last but not least one of the great song-orientated Porcupine Tree albums, Steven Wilson’s vehicle that has catapulted him to the solo success that he now enjoys. Lightbulb Sun was released in 2000 and is packed full of catchy melodies, memorable lyrics and great sounds. Ideas galore, it’s that fine mixture of instrumental sections in songs.

The band features ex Japan keyboard player Richard Barbieri, with Colin Edwin on bass and Chris Maitland on drums. One of my favourite albums of the period.

Song Of The Daze is Cream’s Mother’s Lament, also two live performances by Blackfield and Porcupine Tree (with Gavin Harrison on drums and John Wesley on additional guitars and backing vocals):