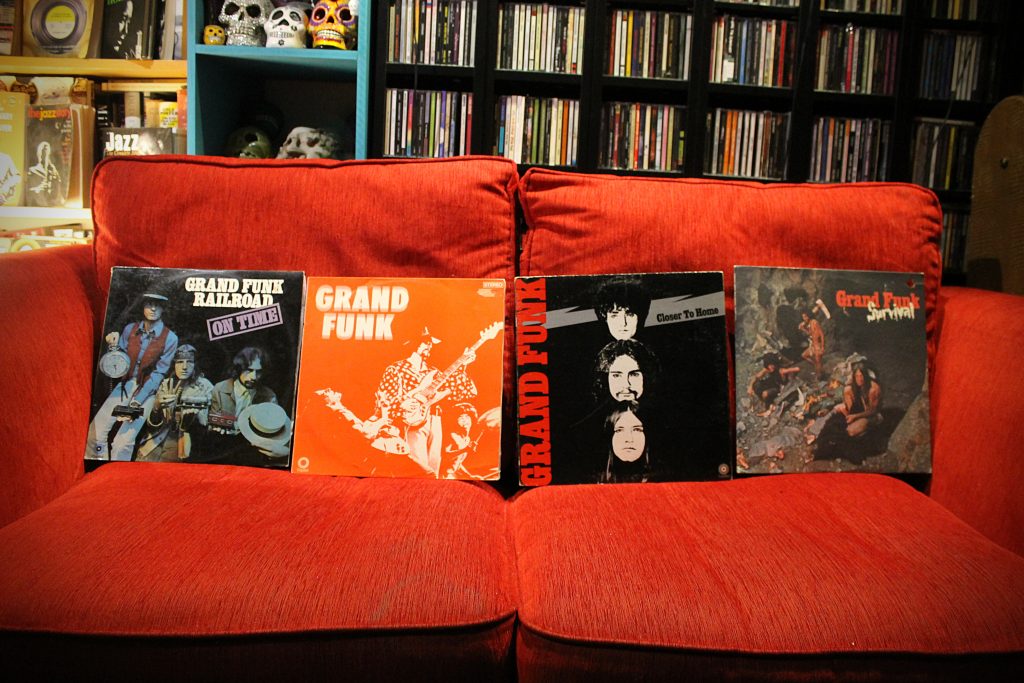 Music today took a heavy turn but only in the context of 1969. It’s still pretty heavy but when you listen to heavy music of the modern era Led Zeppelin sounds closer to Frank Sinatra than they do to the nastiest Death Metal. Grand Funk Railroad were a power trio and they released their debut On Time in 1969 and like Uriah Heep were panned by the critics and despised by the hip, but for all the bludgeoning and the negativity and all the bludgeoning by the band on their instruments I heard power, melody, peacekeeping lyrics and a sound, just a great sound. Also characterful players, Don Brewer on the drums, Mel Schacher on bass and Mark Farner on lead vocals, guitars, occasional piano and harmonica. It’s Blues-based (of course) but it’s energy-filled, garage band Rock that translated into stadiums. Perhaps best described by my friend, wordsmith and critic David Fricke in this piece from Rolling Stone published in 2003.

Because David’s review was stretching beyond On Time, I’m sticking with them tonight. If you haven’t heard the second album released on December 29th 1969 and strangely titled Grand Funk (the red album), ooh are you in for a treat! This is why you need to own a stereo, a proper stereo system. Are you seriously listening to Rock music on computer speakers, or heaven forbid your phone or even earphones? Agggghhhh! You need proper speakers with spread and bottom end and a couch and a proper stereo amp that can give you volume. And guess what, all the music you like, all the genres, sound better, really. What are you waiting for? Every new technological device is nothing compared to a proper stereo. Otherwise, your music player is like owning a Bentley with no seats.

The third album, Closer To Home (1970), is where I discovered Grand Funk Railroad for the first time. Somewhere in Liverpool in the seventies or in Birkenhead in a second-hand record store, possibly Skeleton Records which is still there, or in Probe in Liverpool which is also still there, like Skeleton in a different location. That first track, Sin’s A Good Man’s Brother (what a title)! It was one of the first big Rock riffs I ever learnt to play. It was very exciting to get to America and pick up a copy with the original gatefold sleeve. You either love or hate this kind of music but really we don’t need to know about intense dislike do we, don’t we just move on to what we do like and ignore what we don’t, that’s what I couldn’t understand about the NME, the destruction of people on the way to what they liked.

The last album tonight is Survival (1971), same kind of thing as Closer To Home, there’s a rousing version of Gimme Shelter that I suppose Stones fans would think was sacrilege, but the bass on it is amazing! There’s also a cover of Dave Mason’s Feelin’ Alright. A double live album separated these two releases. When I got to America, I found an original copy with the three original photographs, haha, exciting stuff! So if you are feeling like some early seventies Rock that nobody liked except for me, David Fricke and the people, here it is.