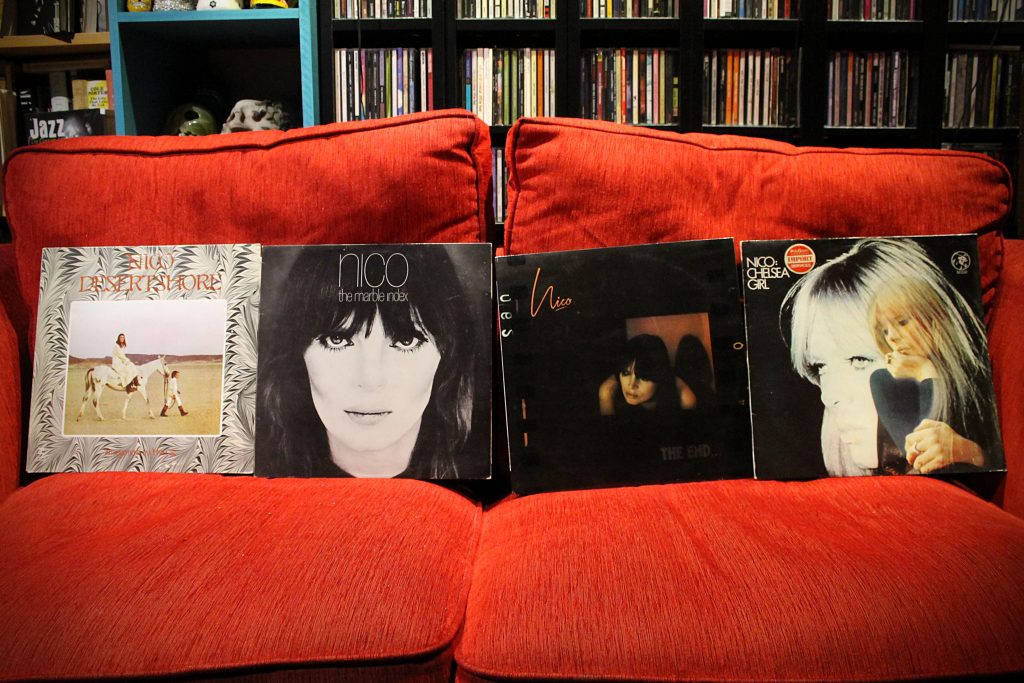 Music today was easy to choose after yesterday’s theme of water. I suppose I could also have played Before The Flood but I was trying to keep it short and that’s a double album. Then there’s productions by Flood and I’m sure I have a CD by a band called Waterlilies?

But today after all that watery talk I was inspired to go dry so I dug out Nico’s Desertshore (1970) and once I was there I couldn’t escape her and continued with The Marble Index (1968), The End (1974) and Chelsea Girl (1967), finishing on the lighter of her albums for fear of falling into a deep dark reverie and being transported on the wings of a giant lunar moth leaving England over the sea from Penzance, touching Brighton and crossing the channel and flapping our way into France coming to Calais then inland over Lens then Metz and crossing the border and seeing Saarbrücken in Germany before finally landing in the Black Forest. And then I was there, Lothar the lunar moth laid me down in Nico’s garden where she was clipping the flowers off the rose bushes and admiring the thorns. “Guten Tag,” she said in a deep dark voice that made the bark tremble on the trees. Her eyes were like chasms, you fell into them and after several minutes of endless descent, you landed with a bang on the floor of her soul. There, a sticky black liquid restricted your movements and it was dark except for a single candle. Something scurried across the floor, if it was a floor, it was hard to tell, it could have been the hard shell of a giant flat mollusc or the surface of a distant planet. Beyond the candle in its dull light, blood red and beating like a drum was Nico’s heart where for a short moment I thought I heard it whisper: I love you.

The unedited version of Nico’s session for ‘Disco 2’ in honour of what would have been her 80th birthday on 16/10/18. Janitor Of Lunacy, The Falconer and some cutaway shots of Nico pedalling the harmonium.