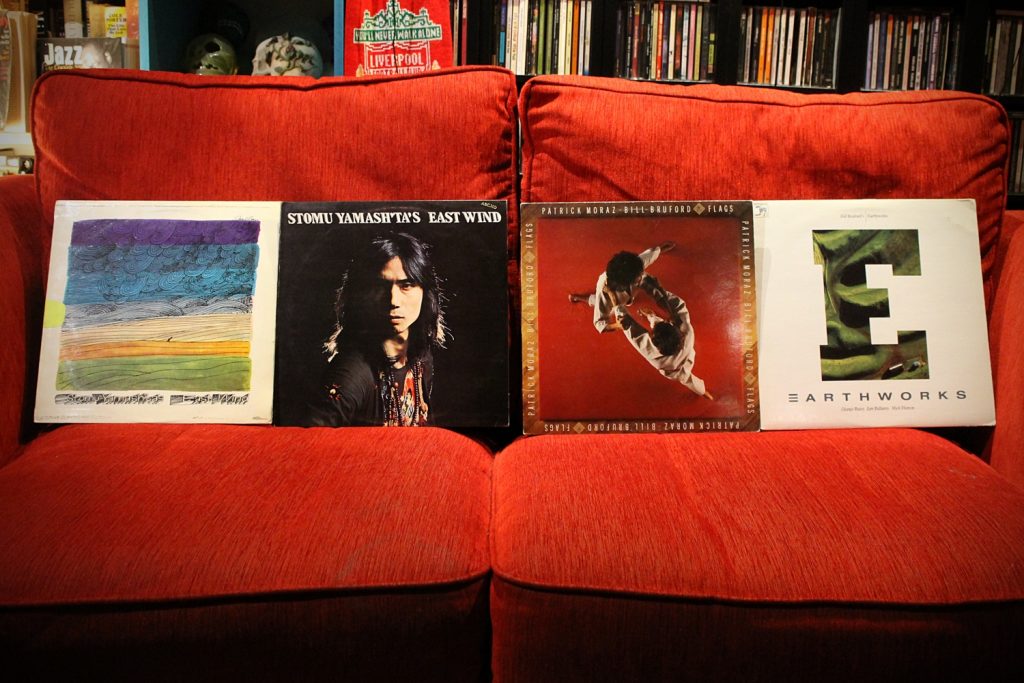 Music today was chosen at random by Olivia and she happened upon Stomu Yamashta’s East Wind. He is a Japanese percussionist who has made some wonderful Jazz-Rock albums. From Wikipedia: “He is best known for pioneering and popularising a fusion of traditional Japanese percussive music with Western progressive rock music in the 1960s and 1970s”. Freedom Is Frightening (1973) featured Gary Boyle from Isotope on guitar and Hugh Hopper from Soft Machine on bass with Brian Gascoigne on keys and if you like this kind of thing…One By One (1975 – cover photograph by Mick Rock) is the soundtrack to a film about the deadliness of Formula 1. It’s the same lineup except for Sammi Abu, vocals, congas and flute, and Nigel Morris on drum kit.

Olivia stayed on the percussive connection and dug out Bill Bruford and the Swiss virtuoso Patrick Moraz and the album Flags from 1985. It sounds like it was recorded in the eighties with some of the choices of sounds made by this famous drummer (Yes, King Crimson) and keyboardist (Yes, Moody Blues) but generally, it’s an interesting intellectual romp through pre-planned improvisations, that covers jazzy flourishes with experimental piano lines and precise percussive passion.

In 1987 Bruford instigated the Earthworks project which was another intellectual jazzy instrumental project. The band: Iain Bellamy on alto, soprano and tenor sax, Django Bates, tenor horn, trumpet, keys, Mick Hutton on upright bass and Dave Stewart from Uriel, Egg, Khan, Hatfield and the North, and National Health as producer and sampler. The music is smart and will only appeal to a certain audience, I’m not that audience but like it anyway.