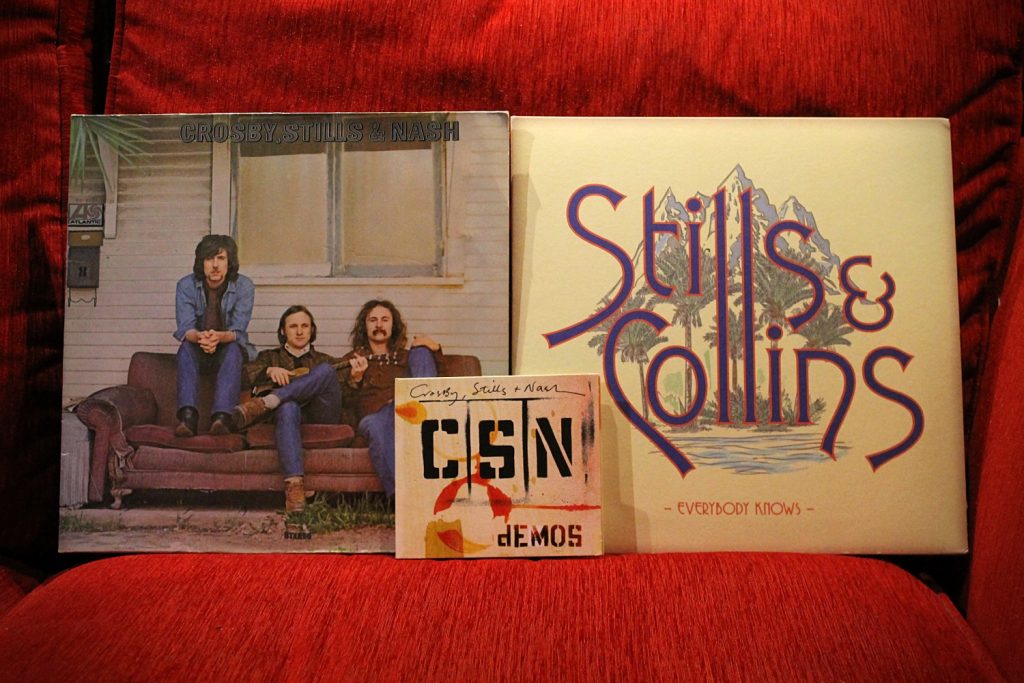 Music today has been inspired by singing harmonies and gave me the urge to hear those harmony masters, Crosby, Stills & Nash. That first self-titled album (1969) and the opening track Suite: Judy Blue Eyes – 7.24 – a single was released at 4.34 and reached No.21 on the Billboard Charts in 1969. It’s actually hard to pick out tracks from this album, some composed by Stephen Stills, others by David Crosby and others by Graham Nash but one has to mention Wooden Ships written by Crosby, Stills and Paul Kantner from Jefferson Airplane. Overall their three-part harmonies are magnificent throughout.

In 2009, Rhino released a demos album recorded between 1968 – 1971 with most of the songs performed solo acoustic by the writer. It gives a clue as to what the raw material sounded like before the harmonies were added…great!

Then this odd album, Everybody Knows (2017), by Judy Collins and Stephen Stills, a long time has passed since Suite: Judy Blue Eyes, Stills’ song about her. The album opens with the Traveling Wilburys’ Handle With Care, odd, but I guess they liked the song, I know I always liked that song except Stills didn’t seem to understand the importance of the guitar part and how important it is, just concentrating on the vocal part. So on one hand, interesting to hear them sing it and slightly disappointing to not here Stills as a guitar player appreciate something about it.

But although I like the album a lot it’s an odd mix of covers and original songs by both of them, some old classics, Sandy Denny’s Who Knows Where The Time Goes which Collins was famous for singing before Denny, even though Denny wrote it. Leonard Cohen’s Everybody Knows, Tim Hardin’s Reason To Believe, Dylan’s Girl From The North Country. So you might say some standards and that refers to their own songs that include So Begins The Task from CSN – Judy is another song by him for her that appears on the Just Roll Tape 1968 demos album. Collins contributes River Of Gold and Houses. Lovely singing.