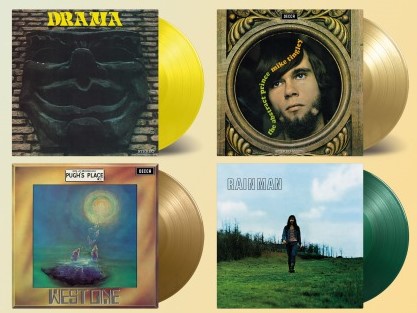 Music today has come due to a notification that I got from Music On Vinyl. I’ve always had a thing for Dutch bands. Perhaps it was seeing Golden Earring and Alquin when I was a teenager at Liverpool Stadium or discovering Focus’ Moving Waves (1971, aka Focus II) in the seventies second-hand racks. But later I became a big fan of The Nits after buying a random CD Mini LP in Stockholm in the eighties, Hat (1988). I since went on to buy almost everything they released from 1978 till now. I recently bought a CD of Q65’s Afghanistan album (1970) that was extremely hard to find, impossible on vinyl, or at least way too expensive. Whilst on tour in Amsterdam a year ago (the gig was cancelled due to a massive storm) I went to one of the great Dutch record stores, Concerto in Utrechtsestraat. It was there that I found a reasonably priced copy of the second Group 1850 album Paradise Now (1969), another Dutch classic along with a reissue I bought later of their first album Agemo’s Trip To Mother Earth (1968). Whilst I was there I also bought Golden Earring’s guitarist George Kooymans’ early solo album Jojo (1969). I just found out today that Kooymans has just announced he has Lou Gehrig’s disease and is retiring from music. Golden Earring had been together since 1961 (60 years), with Kooymans and bassist Rinus Gerritsen there from the beginning to the end. In the current lineup, singer Barry Hay joined in 1967 and drummer Cesar Zuiderwijk joined in 1970. A sad end to a Dutch institution.

So I’ve always been on the lookout for anything Dutch and today Music On Vinyl announced Behind The Dykes, four hard-to-find limited edition albums, three I didn’t know. Drama (1971), a blues and progressive rock band that featured Frank Vandenkloot on guitar – they only made this one album, Pugh’s Place’s West One, a progressive band from 1971 (I knew and already have a CD), Rainman (1970, ex Q65 members going folky) and Californian traveller Mike Tingley who ended up in Amsterdam in the sixties and released The Abstract Prince (1968, on local label Philipps) – it’s one of those psychedelic orchestral sixties albums. All these records are 1000 limited editions except for Mike Tingley which is just 500 (and by the way, I’m still looking for Frank Vandenkloot’s Fontessa). All I can say is snap them up, already hard to find, even the reissues will be scarce in years to come – brilliant if you like this kind of thing.

So many songs to post today, so let’s just have one in honour of George Kooymans. Thinking of you George, thank you for the music.