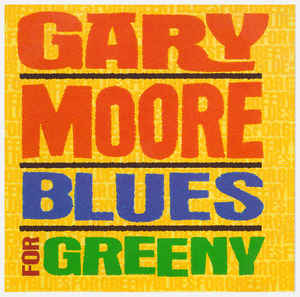 Music today has been an odd mix of seventies Prog, Blues, and Space. Gary Moore was one of the great Blues guitar players dying of a heart attack whilst on holiday in Spain at the age of 58. It took him a while to find out what he wanted to do but after he dismissed his own foray in AOR, Rock, Hard Rock, and Heavy Metal as “the biggest load of effing s*** he’d ever heard”. That music certainly made him no fans with the hipsters. But he settled on playing the Blues which was his forte. What a player, what a tone and wielding Peter Green’s 1959 Les Paul which he sold to him for £100 (he sold it to Kirk Hammett from Metallica allegedly for between £750,000,000 and £1,250,000.000). Moore’s history included stints with Ireland’s Skid Row that originally included Phil Lynott on vocals, Colosseum and Thin Lizzy, the records all overshadowed by his post commercial excursions. Major success in America eluded him, odd for a great Blues player but take a listen to Blues For Greeny (1995) using THAT guitar exclusively and Old New Ballads Blues (2006) if you want to know how to be one of the best in your genre.

Before we went out I put on Genesis‘ Nursery Cryme (1971) and Foxtrot (1972), more for Olivia as I was in and out of the house but I got to hear a good chunk of those amazing albums. We were talking about Phil Collins singing For Absent Friends uncredited on Nursery Cryme. When we came back from the street I randomly found Hawkwind on my iPod and listened to Blood Of The Earth (2010) and Doremi Fasol Latido (1972) with one run through Silver Machine (1972), Urban Guerrilla (1973) and Brainbox Pollution (1973) for good measure. Something else, if you like this kind of thing.