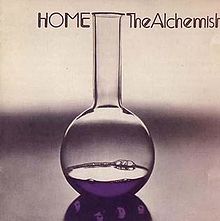 Music today was partly inspired by my mate Biggles as he sent me a text today from deepest darkest New Malden and told me what he was playing today and asked me what I would be playing before making some suggestions. He was listening to Blackfield and Liam Gallagher and he suggested Roundabout, The Boys Are Back In Town and anything by City Boy! Haha, City Boy! It’s been a while and maybe not today as I’ve run out of time but I did at his suggestion listen to Fragile (1971) by Yes. Before that, I listened to Meddle (1971) by Pink Floyd because I was talking to Orlando about it. But the first album I listened to is right off everyone’s radar, The Alchemist (1973) by Home who spawned two members that went on to more well-known bands – Laurie Wisefield replaced Ted Turner on guitar in Wishbone Ash and Cliff Williams found himself replacing Mark Evans on bass in AC/DC. All great if you like this kind of thing.