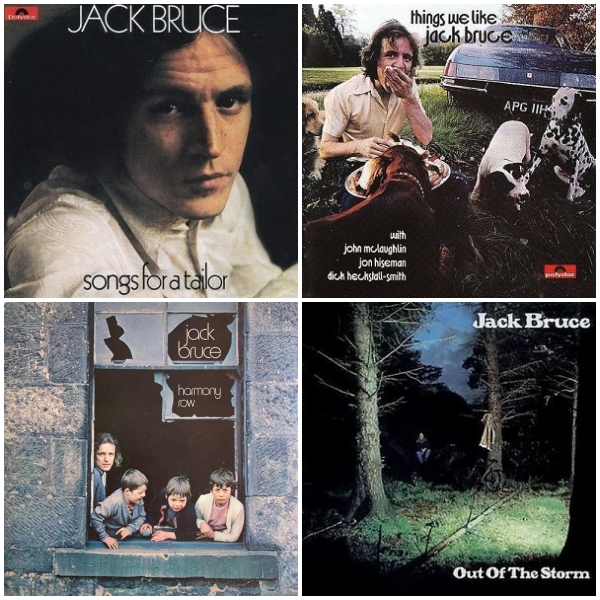 Music today started with Jack Bruce’s Songs For A Tailor (1969), a great showcase for Bruce’s bass and other musical skills, his songwriting skills and his singing skills post Cream (lyrics are by Pete Brown on this and continuing through his later albums). A must-have album for any music aficionado. He followed it in 1970 with the jazz instrumental album Things We Like. It’s quite different to Songs For A Tailor, it showed another side, his intellectual side. He was an electric and double bassist, pianist and cellist and you hear him playing the double bass in this album in the jazz mode. He also had famous friends, John McLaughlin playing guitar, Jon Hiseman on drums and Dick Heckstall-Smith on sax. The album was apparently recorded before Songs For A Tailor although it was released afterwards. Not recommended unless you are a proper jazz person.

On his third album Harmony Row (1971) he was back to the interesting songs and the inspired singing. Guitars are by the ubiquitous Chris Spedding, drums by John Marshall who played with Nucleus and Soft Machine. After this he joined power trio West, Bruce and Laing with Leslie West and Corky Laing as Mountain bassist and Cream producer Felix Pappalardi announced he was leaving the band. Two studio albums, a live album and a hell of a lot of drugs later, West, Bruce and Laing broke up and Bruce was back in the studio making Out Of The Storm (1974), another album of intriguing songs showcasing his compositional skills. Steve Hunter who famously played with Lou Reed and Alice Cooper played the guitar, with two drummers joining, Jim Keltner and Jim Gordon. An afternoon exploring these records, listening, no distractions, just the music and the album cover, might be the worthiest artistic commitment you make for a while – and his albums don’t stop here.