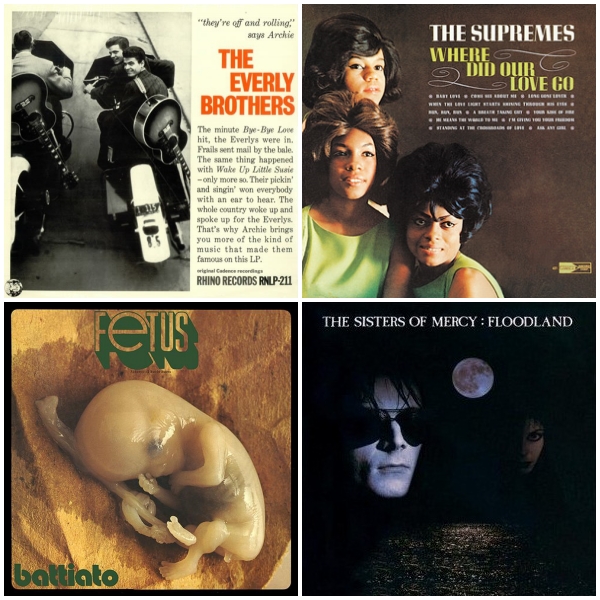 Don Everly died today, he was 84. It’s been seven years since his brother Phil left us at the age of 74. When we talk of harmony singers we often talk about blend and The Everly Brothers had the greatest blend, like The Beach Boys, Crosby, Stills and Nash, The Hollies or the Beatles. Phil and Don are in the lyric of the Wings song Let ‘Em In from the album Wings At The Speed Of Sound (1976). The Everly Brothers had that wonderful brother blend like First Aid Kit have that wonderful sister blend, it’s intoxicating. Their debut album was released in 1958, the year I was born and had hits from 1957, the hugely popular Bye Bye Love reached No.1 on the chart. It was allegedly turned down by 30 artists before The Everly Brothers agreed to record it. Bye Bye Love and another hit, Wake Up Little Suzie, were written by Felice and Boudleaux Bryant. Major hit All I Have To Do Is Dream was credited to just Boudleaux, as was the classic multi-covered Love Hurts originally only an album track on their fourth album, A Date With The Everly Brothers (1960) which incidentally featured the classic single Cathy’s Clown written by only Don, allegedly.

From the fifties to the sixties and the loss this year of original Supremes member Mary Wilson. Their second album Where Did Our Love Go (1964) featured the hit and title track as well as another classic, Baby Love (1964). Oddly in 1964, they released the album A Bit Of Liverpool, perhaps it wasn’t so strange, it just shows how popular Liverpool had become with the worldwide success of The Beatles and The Supremes covered Can’t Buy Me Love, I Want To Hold Your Hand and A Hard Day’s Night and You Can’t Do That, plus McCartney penned A World Without Love, a hit for Peter and Gordon. Other sixties classics were included on the album, songs written by songwriters and performed by sixties bands like The Animals – House of the Rising Sun, Smokey Robinson’s You’ve Really Got A Hold On Me (recorded by The Beatles), and Gerry and The Pacemakers’ How Do You Do It as well as Dave Clark Five’s Bits And Pieces. The album is weird, doesn’t really work, someone’s bright idea and not a patch on the soul-pop written for them by Holland-Dozier-Holland. The chord at the beginning of their version of A Hard Day’s Night says it all. Of course, they went on to make many great albums, had classic hits and when Diana Ross finally left to go solo, Mary Wilson remained in the band from 1959 when they were known as The Primettes till they broke up in 1977. Other songs you may remember, You Can’t Hurry Love and You Keep Me Hanging On, both released in 1966 and of course, Stop! In The Name Of Love (1964) and the psychedelic Reflections (1967, which I bought when it came out).

To the seventies where this year we lost Italian singer Franco Battiato whose 1971 experimental album Fetus and the follow-up Pollution (1972) will have you wondering what you’ve got yourself into and if you find yourself descending further down the complicated and prolific Battiato rabbit hole you might want to consult Julian Cope’s take on this most fascinating of artists. An English version of the album recorded at the time and shelved at the time has also been released, somewhere, I’m not sure where.

When it came to the eighties Jim Steinman surpassed his success with Meat Loaf and Bat Out Of Hell (1977) perhaps best with Bonnie Tyler’s Total Eclipse Of The Heart (1983), but how many remember his involvement with Sisters Of Mercy’s Floodland (1987)? The lead single was This Corrosion, produced by Steinman as was the opening track Dominion/Mother Russia. Apparently, the budget for This Corrosion was £50,000. Yikes, money ran like water in those heady days of the eighties. The 40 vocalists at the beginning were typical Jim Steinman and his over the top ideas. I wonder if he had an extravagant funeral.