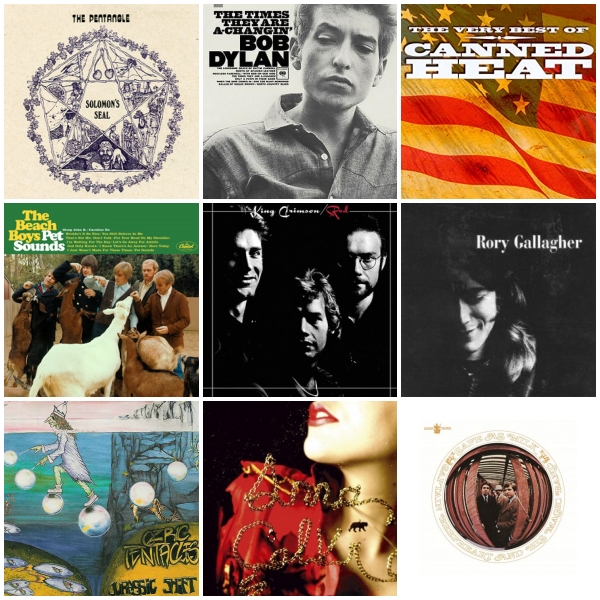 Music today has been another eclectic mix, starting with Pentangle’s Solomon’s Seal (1972) featuring some moody electric and acoustic folk with Danny Thompson’s brilliant double bass sound and style, Bert Jansch and John Renbourn on the guitars, Jansch and Jacqui McShee on vocals and Terry Cox on drums, it’s a classic in its genre. I love the opening track Sally Free And Easy, written by songwriter Cyril Tawney.

Next came Bob Dylan’s The Times They Are A-Changin’ (1963) which I listened to because when I popped into W.H. Smith’s to say Hi to Pete, I noticed there’s a new series of vinyl and magazine that’s just started with Dylan albums and the collector in me had to get it, it was only £7.99 too (they did it with The Beatles a while ago). Now I have to find a nice friend who can pick up the bi-weekly or monthly copies after I’ve gone back to Portugal – hello nice friends.

Next was a Canned Heat compilation from 1989. After seeing the Top Of The Pops Let’s Work Together (sung by Bob The Bear Hite) clip with the dancers, it’s classic sixties style and I’ve always also loved Going Up The Country sung by Alan Blind Owl Wilson in that weird voice (he also sang On The Road Again). I think Canned Heat get a bad rap, there’s a lot more to them than a generic boogie band, guitarists Henry The Sunflower Vestine, Blind Owl and Harvey The Snake Mandel had the magic (as did bassist Larry The Mole Taylor). Then there’s drummer Adolfo Fito de la Parra whose been in the band since 1967 and is still there.

Next, over dinner, we listened to The Beach Boys‘ Pet Sounds (1966). We like to listen to the album, not just for its beautiful vocals and wonderful songs but for its odd arrangements, such an accessible and complex record, way ahead of its time structurally.

Next Olivia wanted to listen to King Crimson‘s Red (1974), another classic album, King Crimson as a three-piece with Fripp on guitar, Bill Bruford on drums and John Wetton on bass and vocals. It’s raw and melodic, experimental and beautiful, love it. It would be seven years before they’d make another album and then the band was a whole new thang.

I saw that my triple vinyl 50th-anniversary copy of Rory Gallagher’s debut album (1971) had arrived and although I’m not really finding the time to play all kinds of recently arrived vinyl records, my CD version of the album was at hand. Such a great tone and you can hear his heart on every note and throughout all his albums. I saw him twice, once at the stadium in Liverpool and once at the Reading festival in the seventies.

After mentioning Ed Wynne and his face carved onto the renovations on Wells Cathedral, I thought that a long-overdue listen to Ozric Tentacles‘ Jurassic Shift (1993) might be appropriate with earthquakes and volcanoes on the move around the world. Great cosmic jams.

I’ve seen Anna Calvi live three times and even interviewed her once for some internet thing I was doing when I worked at Pet Sounds Records in Stockholm. I wasn’t on board with Calvi at first but once it hit me, I became a real fan. Unbelievable voice, especially live and great creative guitar playing. Tonight I listened to her self-titled first album (2011) which has just been reissued on vinyl with different artwork.

Last but not least a trip into the mind of Don Van Vliet with Captain Beefheart’s Safe As Milk (1967). The Magic Band at this point featured Ry Cooder at age 20. It’s a nutty wild bluesy ride into the avant-garde, a fascinating mixture of the traditional and the far reaches of the creative mind. You must also get the CD version with its excellent mad bonus tracks.