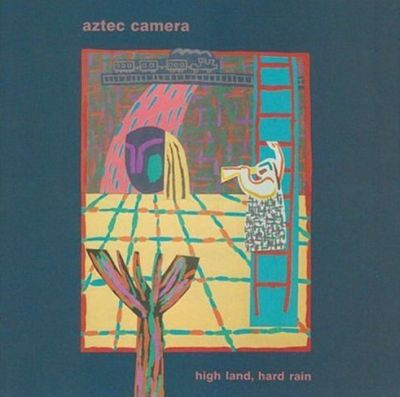 Music today has been Aztec Camera’s classic debut album High Land, Hard Rain (1983) for responder Shivaun O’Neill. Singer-songwriter Roddy Frame got a lot of press and acclaim for this album when it came out. Frame is another one of those mysterious singer-songwriters who hasn’t made a record for years. After six albums with Aztec Camera between 1983 and 1995, he made four solo albums between 1998 and 2014 but hasn’t released anything for eight years. I bought the early singles (in picture sleeves) and still have them in the archive, Mattress Of Wire, Oblivious, Pillar To Post, Walk Out To Winter, All I Need Is Everything. I don’t have the very first one, released on Postcard Records, Just Like Gold (1981) but I do have Mattress Of Wire (1981) on Postcard and the Rough Trade singles Pillar To Post (1982), Walk Out To Winter (1983) and Oblivious (1983) and All I Need Is Everything (1984) on WEA.