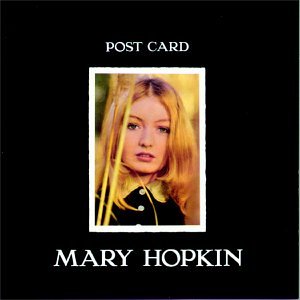 Music today was native Welsh speaker Mary Hopkin’s Post Card (1969), a lovely album with the famous song Those Were The Days, a bonus digital track is McCartney’s Goodbye. Who knew that she would go from Wales to Opportunity Knocks (a British TV talent show) to being signed to The Beatles‘ Apple label and having Paul McCartney write for her, to be making albums, to marrying T. Rex and Bowie producer Tony Visconti and singing on Bowie’s Low (1977). She sang Knock, Knock Who’s There at the 1970 Eurovision Song Contest and came second (to Dana). She was also in a band called Oasis with Peter Skellern and Julian Lloyd Webber).