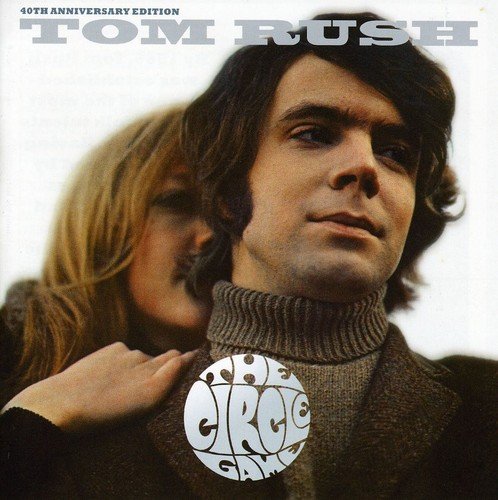 In the store, I found a copy of a Tom Rush album that I already have but not in such good condition. The Circle Game was released in 1968 on Elektra Records and included three songs written by Joni Mitchell, Tin Angel, Urge for Going and The Circle Game, the title track. Mitchell didn’t record it herself till 1970 on her album Ladies of the Canyon. It had also been recorded by Ian & Sylvia and Buffy Sainte-Marie in 1967. The Circle Game was written as a response to Neil Young’s Sugar Mountain, written when he was 19 (“You can’t be twenty on Sugar Mountain”). This was her response. This from Wikipedia:

In a concert at the Paris Theatre in London on October 29, 1970, Mitchell opened her performance of “The Circle Game” with this speech:

“In 1965 I was up in Canada, and there was a friend of mine up there who had just left a rock’n’roll band (…) he had just newly turned 21, and that meant he was no longer allowed into his favourite haunt, which was kind of a teeny-bopper club and once you’re over 21 you couldn’t get back in there anymore; so he was really feeling terrible because his girlfriends and everybody that he wanted to hang out with, his band could still go there, you know, but it’s one of the things that drove him to become a folk singer was that he couldn’t play in this club anymore. ‘Cause he was over the hill. (…) So he wrote this song that was called “Oh to live on sugar mountain” which was a lament for his lost youth. (…) And I thought, God, you know, if we get to 21 and there’s nothing after that, that’s a pretty bleak future, so I wrote a song for him, and for myself just to give me some hope. It’s called ‘The Circle Game’.”

The album also included James Taylor’s Something in the Way She Moves, released on Taylor’s self-titled debut (1968) on Apple Records. The inspiration for George Harrison’s Something. Another James Taylor song, Sunshine, Sunshine, from the same album, is also included. There’s also Jackson Browne’s Shadow Dream Song, Charlie Rich’s So Long and Billy Hill’s The Glory of Love, a hit for Benny Goodman in 1936 (also recorded by Paul McCartney on Kisses on the Bottom, 2012). Rush only wrote two songs on the album, Rockport Sunday and his own classic, No Regrets. Interesting that a songwriter that could write a song as great as No Regrets would release an album with eight songs he didn’t write. The reason, he was recognising the quality of contemporary artists’ work and that was more important than anything. The Walker Brothers released No Regrets as their comeback single in 1975. Midge Ure released it as his debut solo single in 1982.