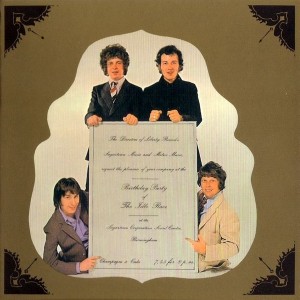 Music today has been the oft-overlooked early Jeff Lynne recorded output before he was in The Move and latterly ELO. In 1968 and 1969 he released two albums as a member of the band The Idle Race. The first one, The Birthday Party (1968), is today’s album of the day and it’s a classic late-sixties psychedelic affair with all the songs written by and sung by Lynne. Whatever happened to the other band members, Dave Pritchard on guitar, Greg Masters on bass and Roger Spencer on drums, remains a mystery. Jeff Lynne’s talent is apparent early on with songs like The Birthday, On With The Show, and Morning Sunrise, with the album overrun with many twee novelty songs, a lot of the album is best listened to in the spirit of the times, you might want to dress in period dress for it.